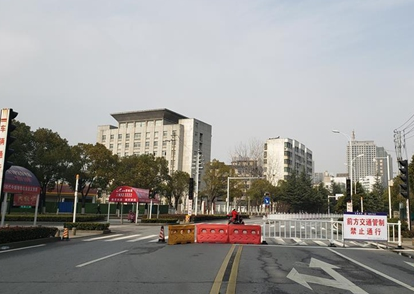 A grassroots official in Central China's Hubei Province, the epicenter of the COVID-19, has been suspended for alleged 'abuse of power' after his son flaunted undue privilege on social media claiming an official arranged a car for him to travel to Jingzhou, a city currently under lockdown in the wake of the virus outbreak.

Investigation revealed his son, He Hao, on Friday boarded a car used for transporting supplies from Tianmen, another city in Hubei, through one of He Yanfang's contacts after He Hao finished quarantine in Tianmen, read the announcement.

The announcement came after He Hao posted Friday on Weibo using his handle "Euamoter," "I never thought my father had so much power, who has been an official for long, and I never benefited from him, until the epidemic this time." He Hao said his father sent a car to drive him from Tianmen back to Jingzhou despite the province imposing road blockades.

According to the Jingzhou government's announcement, He published the Weibo post on his way back to Jingzhou.

The post immediately sparked severe outrage on social media with many netizens criticizing He Yanfang for abusing his position.

"Your father could soon suffer a major setback due to your carelessness," commented a netizen under the post. The netizen referred a historical anecdote about General Guan Yu - a figure from the ancient Chinese epic The Romance of the Three Kingdoms - losing Jingzhou for negligence and embracing death eventually.

The topic "Your father could lose 'Jingzhou' for negligence" has been trending on Weibo and received 300 million views as of press time.

Residents especially those in Hubei are following regulations to quarantine themselves at home and are not allowed to visit other cities as the roads are sealed off, "how could you use your privilege and flout the regulations", read another comment.

Following massive public backlash, He Hao apologized Saturday morning saying "At the critical moment of China's fight against the outbreak of the novel coronavirus pneumonia, I made inappropriate remarks on Weibo due to my recklessness and ignorance, which caused great trouble to the public. I would like to tender my sincere apology."

He pledged to strictly abide by the laws and regulations, and pay attention to his words and deeds.

Jingzhou sealed off the city on January 24, the second day of Wuhan's closure, which includes road blockades and restrictions on public transport. As of Friday, the city reported 1,478 infections and 32 deaths due to the COVID-19.