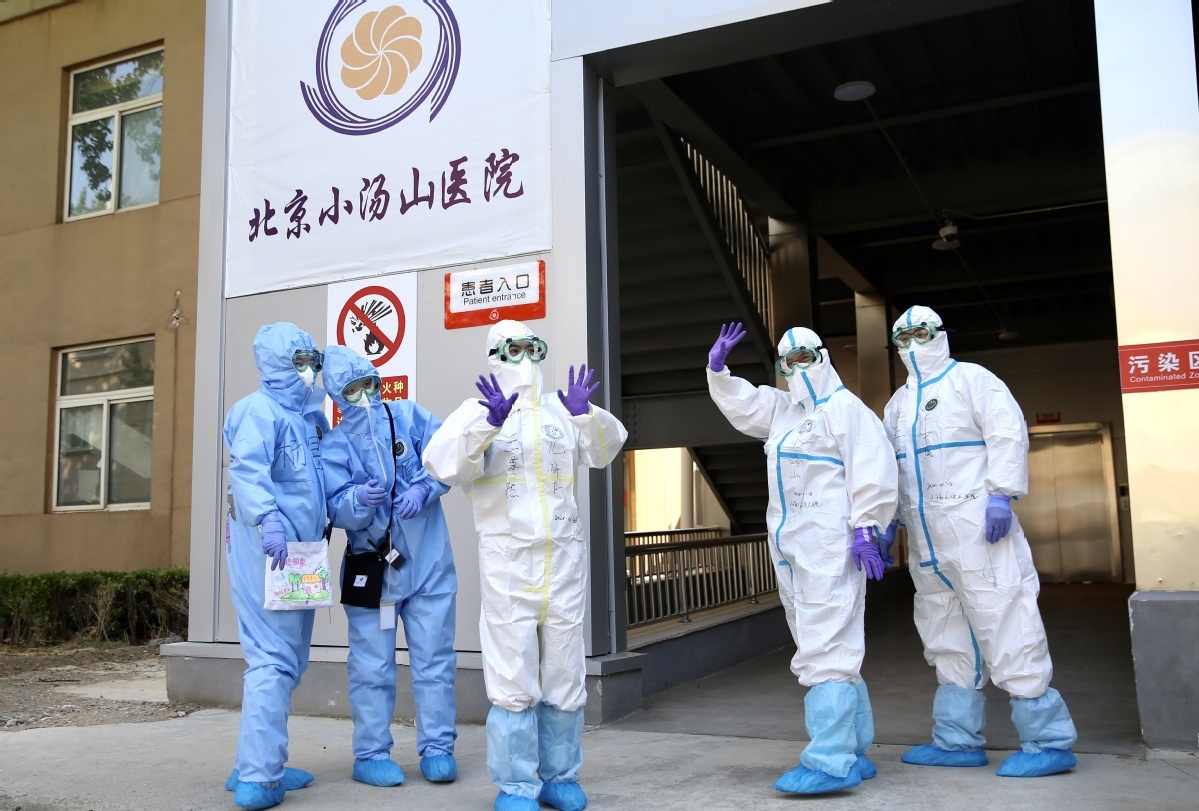 Medics wave goodbye to the cured COVID-19 patients at the Xiaotangshan Hospital in Beijing, on April 28, 2020. (Photo: China Daily)

A major hospital in Beijing designated to screen and treat COVID-19 patients from overseas will close on Wednesday, after the last two patients were cured and released on Tuesday.

A total of 2,175 people were tested over the past 44 days at Beijing Xiaotangshan Hospital－which has been used primarily to handle cases during epidemics, including SARS－with 54 confirmed cases hospitalized for treatment, the hospital said in a statement.

The hospital, with more than 1,600 beds, completed renovations on March 8 and began operations on March 16 as the risks of imported infections increased. It was designated to conduct COVID-19 testing on overseas travelers and to treat suspected cases as well as mild confirmed cases.

Medical workers from 22 major hospitals in Beijing were dispatched to the hospital to aid in the testing and treatment of patients. At the height of the imported cases, nearly 400 travelers were tested a day at the hospital after their arrival in Beijing.

With strict epidemic control efforts adopted, COVID-19 outbreaks in Beijing have been effectively contained. No new confirmed cases have been reported in the city over the past 12 days, according to the municipal government.

By Monday, Beijing had reported 174 confirmed COVID-19 cases imported from overseas, with 129 cured and released from hospitals. The rest are receiving treatment, the city's health commission said.

Ma Yingmin, vice-president of Beijing Chaoyang Hospital who was sent to Beijing Xiaotangshan Hospital to help treat patients, said the two patients discharged on Tuesday－an 18-year-old woman and a 50-year-old man－had stayed in the hospital for about a month.

"They were in mild condition, and our therapies were mainly aimed at relieving their symptoms," he said. "Although it was not difficult to provide treatment, they had to stay in the hospital until they tested negative for the virus twice, with a 24-hour interval between the tests."

"I am very excited and happy," the female patient said before leaving the hospital. "In particular, I want to thank the doctors and nurses that took care of me. They were really nice and considerate."

Zhang Wei, a doctor in neurosurgery at Beijing Tsinghua Changgung Hospital, who participated in diagnosis and treatment at Beijing Xiaotangshan Hospital, said the hospital provided a pleasant environment for the patients. Each patient lived in a single room equipped with a shower, she said.

With the expected recovery of hospital medical services in Beijing due to demand from locals as well as patients from outside the capital, risks such as cross-infections in hospitals may increase, so high alert is necessary, she said, adding experiences in epidemic control and prevention at Beijing Xiaotangshan Hospital may be promoted in others.