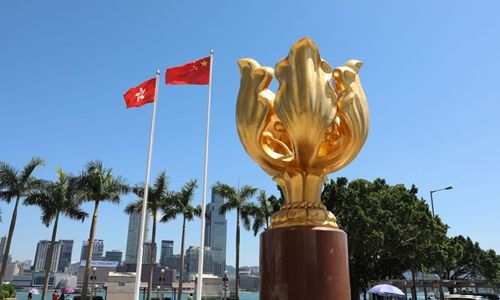 HONG KONG, May 3 (Xinhua) -- The Liaison Office of the Central People's Government in the Hong Kong Special Administrative Region (HKSAR) on Sunday expressed strong condemnation of and firm opposition to the blatant interference in Hong Kong affairs and the malicious smear of "one country, two systems" by Western anti-China politicians and organization.

Recently some anti-China politicians in the United States and Britain have made unwarranted remarks about Hong Kong's legislation on Article 23 of the Basic Law, distorted comments on the police law enforcement actions and judicial system in Hong Kong and unreasonable attacks on "one country, two systems" and the Basic Law, a spokesperson of the liaison office noted, adding that these politicians' absurd remarks and arrogant attitudes are shocking.

Safeguarding national security is the constitutional responsibility of the HKSAR and is purely China's internal affairs in which other countries have no right to interfere, the spokesperson stressed.

The erroneous remarks by these politicians, which seriously violate international law and basic norms governing international relations, are another example of external forces' gross interference in Hong Kong affairs and China's internal affairs at large.

The spokesperson also blasted a recent report by U.S. National Democratic Institute for International Affairs (NDI) as "full of lies and double standards".

The NDI report distorted the truth of Hong Kong's unrest sparked by the now-withdrawn ordinance amendments concerning fugitive transfers, glorified the series of terrorist violence by extreme radicals as "peaceful protests," and defamed the HKSAR government and the Hong Kong Police Force, which have been safeguarding Hong Kong's stability and the rule of law in accordance with the law, the spokesperson said, expressing firm opposition to the organization's egregious acts of openly endorsing illegal and violent elements and undermining Hong Kong's prosperity and stability.

Since Hong Kong's return to the motherland, the policies of "one country, two systems", "Hong Kong people administering Hong Kong" and a high degree of autonomy have been implemented, and Hong Kong residents' rights and freedoms have been fully guaranteed by law. It is a fact universally recognized and not to be distorted, the spokesperson said.

"We are firm in our resolve to safeguard the national sovereignty, security and development interests, to implement the 'one country, two systems' policy, and to oppose any interference by external forces in Hong Kong affairs," said the spokesperson.