Construction workers wearing PPE, some including face masks, work to build new apartments and a retail complex at Nine Elms in south London on May 14, 2020 following an easing of the novel coronavirus COVID-19 lockdown guidelines. (Photo: AFP)

The total number of deaths from the COVID-19 pandemic worldwide has increased to 297,682 with the global confirmed cases reaching 4,371,611 as of 9 pm BJT on Thursday, according to a tally by Johns Hopkins University. 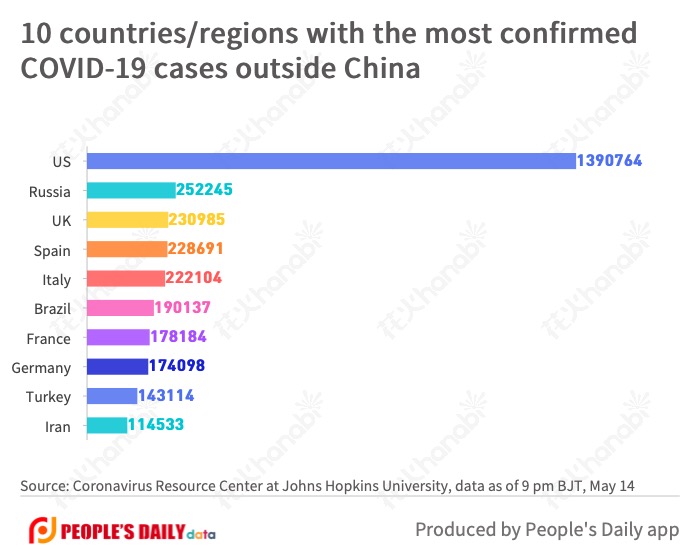 Sailing from the Port of Wuhan, central China's Hubei Province, Huahanghanya 2 steered into the Port of Kobe, Japan on Thursday. With 300 tons of goods including non-medical masks, adult diapers and industrial materials, the freighter discharged some of the goods in Kobe and loaded up.

Nearly three million more American people filed for unemployment benefits in the week ending May 9, according to the US Department of Labor as the COVID-19 pandemic continues to batter the labor market.

South Korean health authorities said on Thursday they would revise their practice of publicizing the travel routes of coronavirus patients due to fears of a backlash against people who attended nightclubs at the center of a new outbreak.

On Wednesday, Germany's Ministry of the Interior (BMI) announced that the development of infections would allow "cautious easing of border controls." Borders between Germany with France, Austria and Switzerland would be fully opened by June 15, according to the BMI.

The Japanese government on Thursday decided to lift a nationwide state of emergency for 39 of the country's 47 prefectures where the COVID-19 has been less prevalent, with the move coming ahead of the planned deadline of May 31.

Malaysia reported 40 new cases and 1 deaths related to the novel coronavirus on Thursday, bringing the total number of infections to 6,819. And the number of deaths rose to 112, according to the country’s health ministry.

Russia's consumer rights and human well-being watchdog said in a statement Thursday that 259,198 people were under medical observation as of Wednesday.