OPINIONS What's the future for manufacturing amid COVID-19 pandemic?

What's the future for manufacturing amid COVID-19 pandemic? 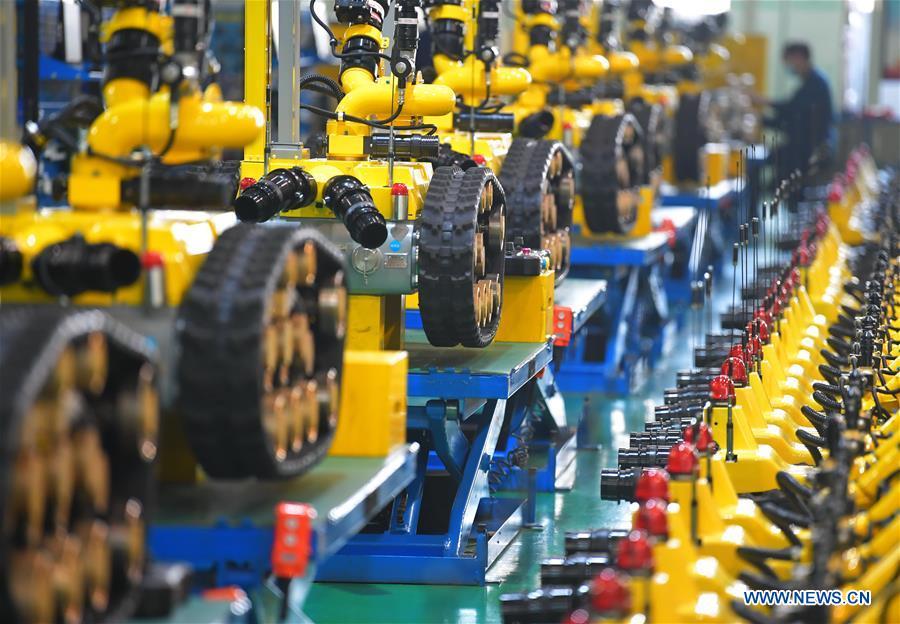 Editor's note: Why did the strongest manufacturing cities in China report negative growth in local public budget revenues during the COVID-19 pandemic? How will the traditional development mode of export industries be? What is the future for manufacturing and global supply chains? As the Cloud River Urban Research Institute releases the 2019 ranking on manufacturing radiation of Chinese cities, Professor Zhou Muzhi gives his perspective on the outlook.

As part of the China Integrated City Index, the Cloud River Urban Research Institute has released the 2019 ranking on manufacturing radiation based on a research of 297 cities above prefecture-level across China. The top 10 are Shenzhen, Suzhou, Dongguan, Shanghai, Foshan, Ningbo, Guangzhou, Chengdu, Wuxi, and Xiamen. Four cities in the Pearl River Delta and the Yangtze River Delta are among the top 10. Other than Chengdu, nine of the 10 cities are big container ports, and the 10 cities' combined export in goods accounted for 47.7% of the country's total.

The next 10 cities in the top 20 are Huizhou, Hangzhou, Beijing, Zhongshan, Qingdao, Tianjin, Zhuhai, Quanzhou, Jiaxing, and Nanjing. Following them, Zhengzhou, Jinhua, Yantai, Nantong, Xi'an, Changzhou, Dalian, Shaoxing, Fuzhou, and Taizhou round out the top 30.

The top 30 cities' export in goods accounted for as much as 74% of the national total. That is to say, the top 10% in the ranking produced nearly three-fourth of the country's export in goods. Except for Chengdu, Beijing, Zhengzhou, and Xi'an, other cities in the top 30 are all coastal or river ports, underlining the importance of container ports for export industries.

China's three major megalopolises -- the Beijing-Tianjin-Hebei region, the Yangtze River Delta region, and the Pearl River Delta region -- accounted for 6%, 36.3%, and 24.5% of the national total export in goods, respectively, combining to share 66.9% of the country's total. The three, especially the latter two, are the driving force of China's export industries. 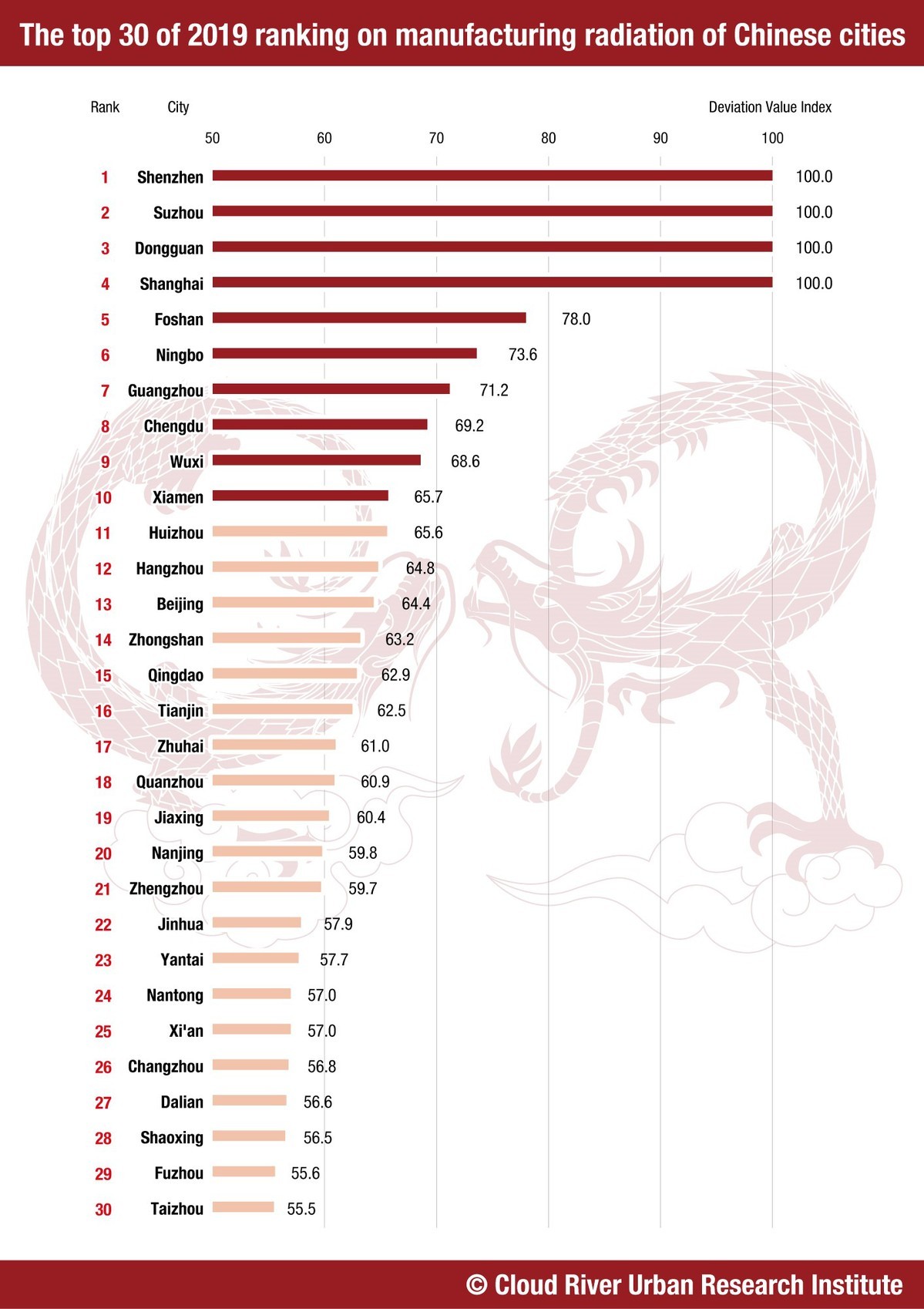 The year 2019 witnessed escalations of China-U.S. trade frictions and a shaky global supply chain. Under the trade tensions, China's total volume of export in goods still grew by 5%, according to the General Administration of Customs. Cities higher in the manufacturing radiation ranking clearly played a part in the country's continued growth.

Since the beginning of 2020, the novel coronavirus has hit the whole world, posing a new challenge to the global supply chains. Some export businesses were shutdown, overseas demand shrank, and some supply chains are broken.

In the first quarter, all the top 10 cities in the manufacturing radiation ranking reported negative growth in local public budget revenue. Six cities, including Shenzhen, Dongguan, Shanghai, Foshan, Chengdu, and Xiamen, had double-digit losses. This indicated that, as the world's largest exporter of industrial goods, China is facing a huge challenge.

China's export industries have benefited from the global expansion of manufacturing supply chains. I predicted 20 years ago that the global expansion of supply chains would help form global supply chain-based industrial clusters, and then megalopolises, in China's Yangtze River Delta, Pearl River Delta, and the Beijing-Tianjin-Hebei region. The prediction has been confirmed over the past two decades, as huge global industrial chain-based industrial agglomeration formed in the regions, and the three megalopolises have gradually taken shape and driven China's social and economic development.

It is through the standardized and digital trend based on information technology that the proportion of tacit knowledge and the time and cost of information exchange between enterprises were greatly reduced. At the same time, modular production, in which design rules were disclosed, allowed global companies to compete in supply chains fairly. Therefore, supply chains were able to break through the constraint of tacit knowledge and extend to the world. The relationship among enterprises in supply chains also changed from a compact pyramid to a flat network, providing a prerequisite for developing countries to engage in global supply chains.

The global expansion of supply chains coincided with China's reform and opening up, making China a major beneficiary of the trend. Its three main drivers were information technology revolution, transportation revolution, and the sense of security brought along by the stable world order after the Cold War. Global supply chains broke the deadlock of high labor distribution rate of industrial countries in the west, and changed the mechanism of global wealth creation and distribution.

Of course, developing countries led by China contributed to a sharp drop in the prices of industrial products through their participation. Such global supply chains, which minimize tacit knowledge, are classic examples of the transaction economy.

China's 40 years of reform and opening up can be roughly divided into two stages by its entry into the World Trade Organization (WTO). The first stage featured efforts in concept changing and economic system reform on the one hand, and those to enter the Western market on the other hand. China's entry into the WTO in 2001 enabled the country to enter the international free trade system, and the door to international markets opened to China. At the same time, initial results were also achieved in the concept changing and the economic system reform during this period. Therefore, China's reform and opening up and the world's free trade system generated enormous energy together. China became the "world's factory" swiftly, and leapt into the top as the world's largest exporter in 2009. In contrast to previous economic struggles, China entered a stage of substantial development after joining the WTO. The robust export industries boosted the rapid growth of a large number of Chinese cities.

From 2000 to 2019, the export volume of Germany and the U.S. increased 1.7 times and 1.1 times, respectively, while that of France, the U.K., and Japan only increased by 0.7 times, 0.6 times, and 0.5 times, respectively. During the same period, the total export volume worldwide increased by 1.9 times, demonstrating that the export growth rates of leading industrial countries were all below the global average. In comparison, China's total export volume was only US$249.2 billion in 2000, but surged to US$2.5 trillion in 2019, 10 times that of 2000. China's exports accounted for only 3.9% of the world's total in 2000, but the percentage reached 13.2% in 2009, ranking first in the world.

The vitality unleashed by reform and opening up and the entry into the WTO have brought huge dividends to China's international trade.

China's sudden rise in presence has set off alarms among many countries. Intellectual property, for instance, is one of the thorny issues in the China-U.S. trade frictions. For another example, to avoid over-dependence of its supply chain on China, Japan began to roll out its "China plus one" policy, which encouraged its companies to build supply chain in countries and regions outside China.

China's rising costs of labor, land, the environment, and taxation should not be ignored. The labor costs are a case in point. From the change of the average wage for on-the-job employees in the 10 cities topping the list of manufacturing radiation in 2019, we can see that the average wage in Shanghai increased 9.3 times from 2000 to 2008; 8.5 times, eight times, and 7.5 times in Chengdu, Suzhou, and Wuxi, respectively; and 6.6 times, 6.3 times, 5.7 times, 5.6 times, and 5.1 times in Ningbo, Foshan, Guangzhou, Xiamen, and Dongguan, respectively. Because of a higher base, Shenzhen's wage rise was the smallest among the 10 cities, with an increase of 4.8 times. It can be seen that China's labor costs have risen at a fast pace.

In the global supply chains, China's advantages in labor costs are disappearing fast.

The traditional development mode of export industries has reached its limit, so China's manufacturing industry needs to evolve to a higher level.

Manufacturing is evolving into interaction economy

A recent buzz is around the U.S. policy of bringing its manufacturing back. I think, even without Trump's strong push, the return of manufacturing to Western countries will occur naturally to some extent.

With rising manufacturing costs in China, some manufacturing sectors sensitive to profit margins are bound to flee China. China should pay more attention to the new trend of advanced manufacturing returning to developed countries.

As the times change, consumers who used to pursue low prices begin to value emotion, personality, and interactivity with manufacturers. The broader background that makes this possible is that the modularization of industrial production has entered a new phase.

The precondition of new industrialization of developing countries is essentially built on the fact that modularized manufacturing enables unskilled workers to take on industrial activities such as assembling, which is the foundation for the globalization of manufacturing chains. However, modularization in conjunction with personalized design nowadays can lead to diversified and personalized small-scale production. Based on modularization, manufacturers and consumers can produce more stylish and personalized products through interaction.

We can imagine that future manufacturing will realize the global supply of high-tech core modules, sensors, and other core components like semiconductor chips. In fact, In Western countries, especially in Japan and the U.S., enterprises have been sharpening their advantages in the development of core modules and components. On the other hand, on the basis of core modules and components, users interact with manufacturers to produce personalized end products, and the latter's dynamic line of supply chains will be short and visible.

Therefore, the current return of manufacturing to developed countries is largely actually returning to the market, which means getting close to consumers. Manufacturing of terminal products will become more personalized and localized. Even if there was no Donald Trump or the COVID-19 outbreak, the return would still take place, which is a demonstration of manufacturing's evolution from trading economy to interactional economy.

Zhou Muzhi is the president of the Cloud River Urban Research Institute and a professor of economics at Tokyo Keizai University.

Opinion articles reflect the views of their authors.