It's been a Ramadan unlike any other for Abdourahmane Sall, far from the mosque during the Muslim holy month as coronavirus cases mount. With only a little over a week left, he decided joining thousands of others in tradition was worth the risk after authorities allowed prayers to resume. 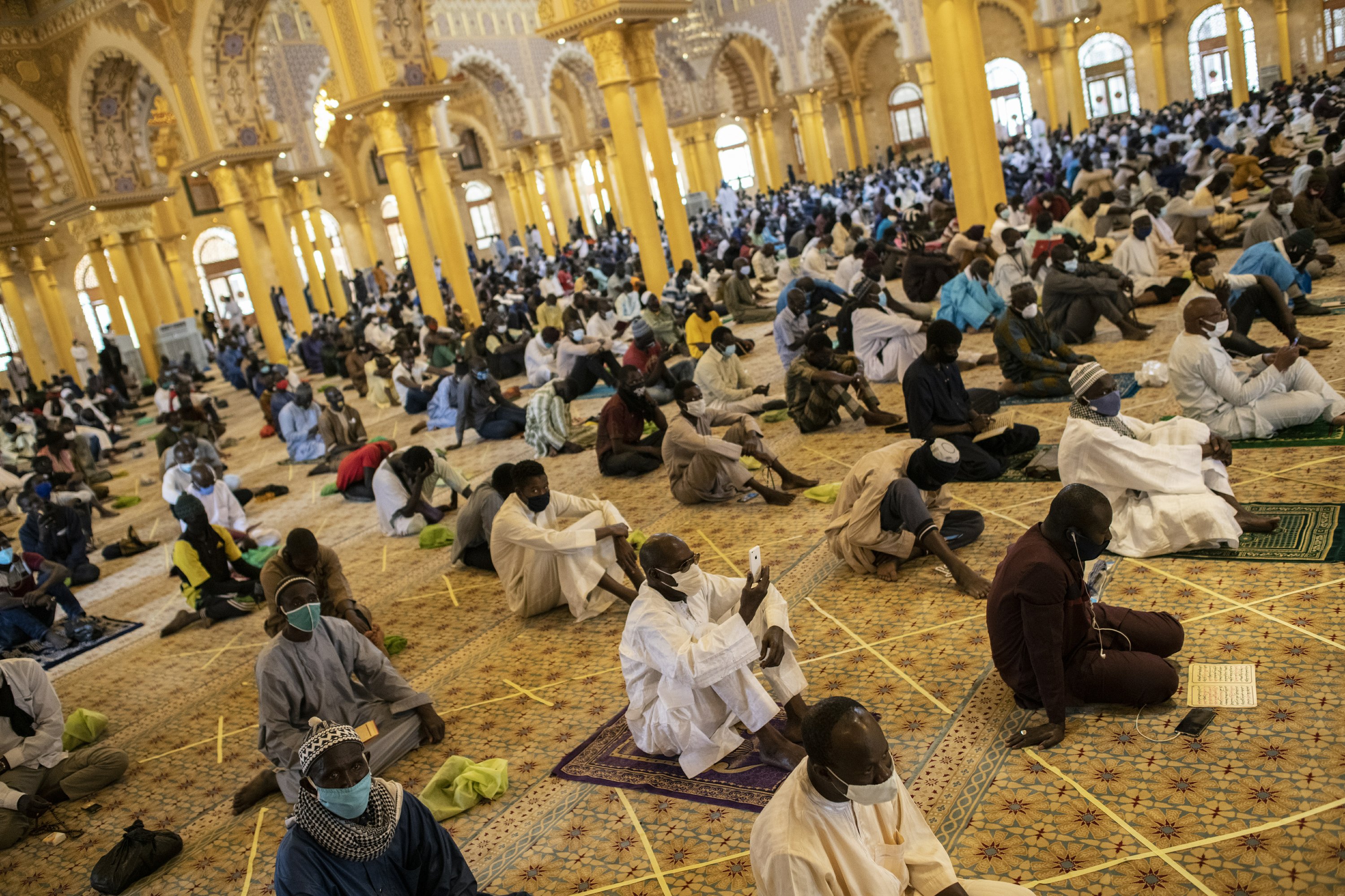 In this photo taken Friday, May 15, 2020, a follower of the Senegalese Mouride brotherhood, an order of Sufi Islam, films with his smartphone as he and others practice social distancing as they attend Muslim Friday prayers at West Africa's largest mosque the Massalikul Jinaan, in Dakar, Senegal. (Photo: AP)

Men formed orderly lines outside the Massalikul Jinaan mosque in Dakar as they waited to receive hand sanitizer before entering while uniformed police watched on nearby. Inside, some 2,000 men set their prayer mats 1.5 meters apart while 3,000 others spread out into the courtyard of West Africa's largest mosque.

"We are being careful but to be honest we cannot escape the virus," said Sall, a 58-year-old tailor in a flowing orange tunic and face mask made of thick fabric. "If we abide by the precautions that health officials tell us, then God will protect us."

The World Health Organization has warned that as many as 190,000 Africans could die from the coronavirus in the first year of the pandemic, and countless more from other diseases as the continent's limited medical resources are stretched even further.

But across West Africa, countries are finding it increasingly difficult to keep mosques closed during Ramadan even as confirmed virus cases mount and testing remains limited. The holy month is already a time of heightened spiritual devotion for Muslims, and many say prayer is now more important than ever.

Last week Niger and Senegal allowed mass prayers to resume, and Liberia is reopening its houses of worship beginning Sunday. In Nigeria, Africa's most populous nation, several states recently signaled the reopening of mosques even as the number of confirmed cases nationwide exceeded 5,000.

The warnings about resuming public gatherings are being made worldwide — but the stakes are particularly high in West Africa, where countries with fewer hospitals and ventilators have been prioritizing disease prevention as a public health strategy. As elsewhere, though, decisions here are starting to reflect an acknowledgement that the coronavirus crisis might last longer than some restrictions can be tolerated.

"We must now learn to live in the presence of the virus, adapting our individual and collective behavior to the evolution of the pandemic," Senegalese President Macky Sall said in an address announcing the easing of several social distancing measures.

His speech came just hours after Senegal marked its highest daily number of newly confirmed cases since the crisis began here in early March, prompting concerns that the easing was premature. With a large diaspora population in Europe, Senegal was among the first African countries to report COVID-19 cases as citizens returned home, but it has maintained a relatively low death toll despite having never enforced a total lockdown as other nations have.

Those early successes have been attributed to the limits on public gatherings and on regional transport, as mosques, churches and schools were swiftly shut down. Critics fear Senegal now risks an explosion of new cases if people pray in large numbers and hold gatherings to mark the Eid al-Fitr holiday at the end of Ramadan.

"We have passed the 2,000 case mark," lamented 39-year-old teacher Daba Senghor. "The opening of the mosques will help the spread of the virus. I am really afraid for my country."

Even some religious leaders in Senegal are still urging their followers to stay home: The Cheikh-Oumar-Foutiyou mosque in Dakar remained closed even after the president's announcement because the COVID-19 threat "is not yet totally under control," according to a statement put out before anyone showed up for prayers Friday.

Where bans have remained in place in West Africa, the restrictions have been contentious.

Two prominent imams were suspended in northern Nigeria, while a Gambian court fined several Muslim clerics who led prayers despite the state of emergency in place.

And in Guinea, a group of young men recently used force to physically open the mosques' doors in Dubreka, a city located 50 kilometers (31 miles) north of Guinea's capital, Conakry.

"The gels, the soaps, the barriers, it's all a joke. It is God who cures this disease, that's why we must open the mosques," said Mouctar Camara, a 26-year-old student who was briefly detained after the incident.

Local leader Alseny Bangoura said they brought together the imams and tried to educate the young men about the risks of COVID-19. Guinea now has more than 2,500 cases even with limited testing.

"We were shocked that they had taken crowbars to open the mosques," he said. "We told them even Mecca is closed."