CHINA US unlikely to default on its debt held by China: experts

US unlikely to default on its debt held by China: experts 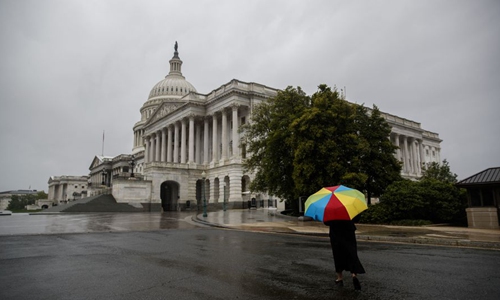 A person walks towards the US Capitol building in Washington D.C., the United States on April 30, 2020. (Photo: Xinhua)

It is unlikely the US government will default on its debt held by China and other countries, as some US politicians have suggested, but the threat signals Washington's lack of confidence, as the US' leading economic position is being challenged by China, Chinese financial experts say.

"The US wants to hurt China, but it would hurt itself more if it chooses to default on its national debt, as the action would shake the credibility of the US dollar," Dong Dengxin, director of the Finance and Securities Institute at the Wuhan University of Science and Technology, told the Global Times.

Several US politicians have reportedly said that Washington should consider defaulting on its debt held by China to "punish" China's handling of the coronavirus outbreak, which the US politicians alleged was not transparent enough.

One of them is Senator Lindsey Graham, a close White House ally, who argued that the US should start writing off part of its debt to China, as he blamed the pandemic on China, and he believed that China has to pay the US, according to a recent Washington Post report.

Chinese experts said that the US government is unlikely to turn words into action, as it wouldn't risk its international creditworthiness which bodes ill for the country.

"One consequence of a default is that all the countries holding US debt will worry about the safety of their assets and start dumping US Treasuries, which may trigger a crash of the US dollar," Dong said.

Also, it might spark countermeasures by China, and the US assets and companies in China could be at risk, he said.

The Chinese mainland held $1.08 trillion of US Treasury bonds at the end of March, the second-largest international holder of US debt after Japan.

Dong also said it is unlikely that the Chinese government will dump US debt.

"Doing that will trigger huge market volatility, and China won't go that way. China does not want to provoke friction with the US, and also it's not easy to find foreign exchange reserve assets that can replace US dollar assets now," he noted.

Although the threats are unlikely to become a reality, they do reflect rising anti-China sentiment in not only political circles but the broader US society, as China increasingly draws abreast with the US in economic strength, experts said.

Gao Lingyun, an expert at the Chinese Academy of Social Sciences in Beijing, told the Global Times that some US politicians are trying to deflect the blame of the Trump administration's mishandling of the pandemic while playing up China threat in the country.

"I think China-US relations will be tense till the US presidential election" in November," Gao said.

Some US politicians have introduced a bill that would establish a "compensation mechanism", as they have accused China of not responding appropriately to the coronavirus outbreak in the initial stage, according to media reports.

However, the truth is more American politicians are increasingly worried about the rapid rise of China's economic strength, Dong said. He criticized some of those political games, like the threat to default on debt, as being "rogue" practices that could lead to the undesired results.

"For example, despite repeated crackdowns on Huawei, the US can't stop the company from growing stronger. Likewise, the US can't sever business ties with China because of its dependence on the Chinese market, which is still growing," Dong said.