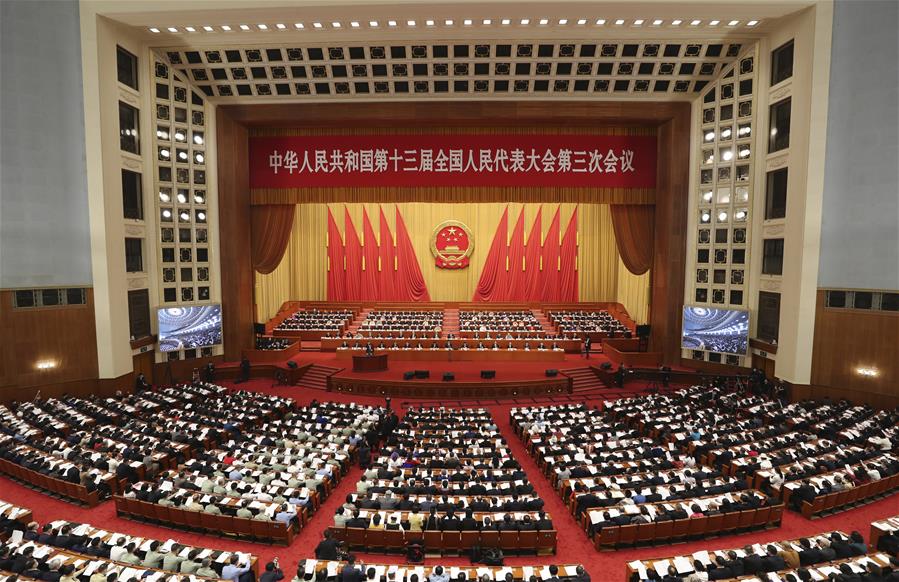 The third session of the 13th National People's Congress (NPC) opens at the Great Hall of the People in Beijing, capital of China, May 22, 2020. (Photo: Xinhua)

BEIJING (Xinhua) -- The Chinese government is firm in its resolve to safeguard national sovereignty, security and development interests, and firm in its opposition to external interference in Hong Kong's affairs, a Foreign Ministry spokesperson said here Friday.

The spokesperson made the remarks in a press statement on the Hong Kong-related agenda of the National People's Congress (NPC) issued Friday night.

The spokesperson for the Hong Kong and Macao Affairs Office of the State Council and the spokesperson for the Liaison Office of the Central People's Government in the Hong Kong Special Administrative Region (HKSAR) both issued statements on the draft decision to establish and improve a legal framework and enforcement mechanism for safeguarding national security in the HKSAR, which was submitted to the third session of the 13th NPC for deliberation, the Foreign Ministry spokesperson said.

National security is a basic precondition for the existence and development of a nation and it concerns the nation's core interests, said the spokesperson.

"But the reality is, since the amendment bill disturbance in 2019, the 'Hong Kong independence' and radical separatist forces have become increasingly rampant with escalating violent terrorist activities," said the spokesperson.

In accordance with the Constitution and the Basic Law of the HKSAR, the NPC's establishing and improving of a legal framework and enforcement mechanism for safeguarding national security in the HKSAR is an essential measure to uphold national sovereignty, unity and territorial integrity and consolidate the foundation of the "one country, two systems" principle, the spokesperson said.

"It is a sure choice to safeguard long-term peace and stability in Hong Kong and prevent and curb foreign interference in Hong Kong affairs. It is legitimate, legal and imperative," said the spokesperson.

In all countries, unitary and federal alike, only the state legislature has the legislative power on issues concerning national security, said the spokesperson, adding that the Chinese central government bears the primary and ultimate responsibility for safeguarding national security.

To establish and improve a legal framework and enforcement mechanism for safeguarding national security in the HKSAR is to prohibit a very small number of people from splitting the country, subverting state power, organizing and carrying out terrorist activities, and foreign and external forces from interfering in the affairs of the HKSAR, said the spokesperson.

"It will protect the vast majority of law-abiding Hong Kong citizens, guarantee the legitimate rights and interests of Hong Kong residents and foreign institutions and personnel in Hong Kong, and safeguard the fundamental interests of the state and HKSAR," said the spokesperson, adding that it "also serves the common interests of the international community."

"One country, two systems" is China's basic state policy, and the Chinese government is firmly committed to its implementation, said the spokesperson.