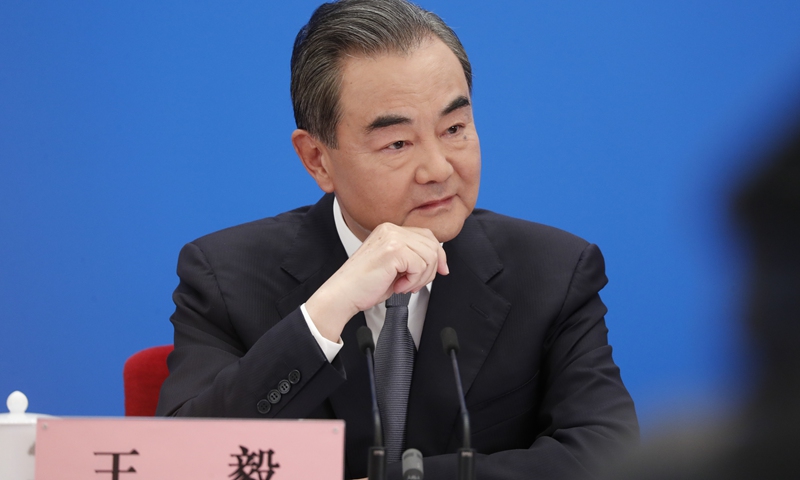 Chinese State Councilor and Foreign Minister Wang Yi attends a press conference on the sidelines of the third session of the 13th National People's Congress (NPC) on Sunday. (Photo: GT)

China is pointing out the correct direction - improving and reforming globalization; upholding multilateralism - for the world to create a brighter future after the COVID-19 pandemic, Chinese analysts said after the Chinese foreign minister's press conference on the sidelines of the annual national legislative session on Sunday.

Chinese State Councilor and Foreign Minister Wang Yi elaborated at the press conference on Chinese foreign policy and strategy on the sidelines of the third session of the 13th National People's Congress in Beijing. He also fired back at provocations and stigmatization from the US.

Although the session had a shorter agenda due to the epidemic, the foreign minister's conference lasted two hours.

Questions on the China-US relationship predominated at the press conference, prompting Jin Canrong, associate dean of Renmin University of China's school of international studies in Beijing to say that it proved the China-US relationship was "significant to the world, and the status quo of this bilateral ties makes the world concerned, and there are a lot of problems between the two sides."

A "political virus" was spreading in the US, Wang said at the press conference. That virus was of losing no chance to attack and smear China, he said.

"Some politicians ignored the basic facts and made up countless lies and conspiracy theories concerning China," Wang said.

Such lies were recently compiled into a list and posted on the internet, he noted.

"The longer the list, the more it says about how low the rumormongers are willing to go and the more stains they will leave in history," Wang said.

This was the first time a top diplomat and state councilor of China formally responded to senior US officials and politicians' provocative and stigmatizing words and acts, said Chinese analysts.

This kind of "political virus" was more difficult to eliminate than COVID-19 because it was determined by a deep-rooted Cold War and Sinophobic mentality in the brains of those US politicians, they noted.

"Some political forces in the US are taking China-US relations hostage and pushing us two countries to the brink of a new Cold War. This is a dangerous attempt to turn back the wheel of history," Wang said.

The two sides "should and must find a way of peaceful co-existence and mutually beneficial cooperation," he said.

The COVID-19 epidemic was the common enemy of China and the US, and it is a shared wish of both peoples to support and help each other, Wang noted.

China's policy toward the US had not significantly changed, according to Wang's remarks, Jin said.

"China still insists on a cooperative attitude and remains calm even as the US showed extreme hostility," Jin said.

"The priority for China, the US and the rest of the world at this moment is to end the pandemic as soon as possible and so China will not launch a confrontational approach against the US even if the US is in a worsening situation."

Diao Daming, an associate professor at the Renmin University of China in Beijing, told the Global Times that if the White House prioritized the benefits of the American people and humanity, "it should listen to the goodwill and advise to stop its hostile moves. But this is not something that China can decide."

If the US refused to stop its wrongdoings, China would "uphold the bottom-line mentality and fight till the end, with no compromise on sovereignty, security, dignity and interests and rights for development," Diao said.

Answering the question of the Global Times at the conference, Wang said that the abuse of litigation by the US against China for the COVID-19 outbreak was "groundless, has no factual basis and no international precedence and attempts to blackmail China over the epidemic are daydreaming and won't work."

Wang said, "the attempt to file frivolous lawsuits is a shoddy one, as it has zero basis in fact, law or international precedence."

Lü Xiang, a research fellow on US studies at the Chinese Academy of Social Sciences in Beijing, said policymakers at the White House and senior US politicians are getting increasingly panicky and nervous as they believe this is a most fragile moment for the US.

Once the US showed "many weaknesses" during its poor handling on the domestic outbreak, Lü said, US politicians would like to exaggerate and hype threats from outside and that was why they were "very aggressive to China even though China is helping and providing medical supplies to American people."

Today's China is not what it used to be a hundred years ago, nor is the world anything like the one from a century ago. If anybody thought they could use some ludicrous lawsuits to undermine China's sovereignty and dignity or to deprive the Chinese people of their hard-won gains, they'd be daydreaming and bring disgrace to themselves," Wang said.

Lü said the US was unable to afford an all-out confrontation with China as COVID-19 has already caused a great loss of its strength. The Trump administration would likely talk more and do less to harm China's interests, Lü guessed.

"Huawei and Hong Kong could be the conflict points in the next stage, but China's retaliation would make the Trump administration suffer more economic pressures," he said.

Although Wang did not directly respond to the Global Times' question about concerns that Washington may confiscate Chinese assets in the US as compensation, some experts saw this as unfeasible: The US would risk losing its own financial status if it resorts to this tactic, they said.

Wang urged the world to embrace a brighter future after the pandemic: improving and reforming globalization, and upholding multilateralism.

"The world will never be the same again, and China will never stop moving forward," he said.

Chinese experts noted this is an idea most members of the international community share and the opposite direction to the unilateralism of "America first" which the Trump administration is pushing.

In the post-pandemic international order, the US will be increasingly isolated and less influential, they said.

Li Haidong, a professor at the institute of international relations of the China Foreign Affairs University in Beijing, told the Global Times that if the US continued its "unilateral, arrogant and selfish policies" to harm not only China but also its allies, its credibility would plummet.

Aside from the US, all Wang's other remarks at the press conference sent much more friendly and cooperative signals, such as China-Russia, China-Europe, China-Japan-South Korea and China-ASEAN relations.

In response to a question about whether China and Russia will join forces to challenge US predominance, Wang said the two countries have supported and defended each other against slander and attacks coming from certain countries.

"Together, China and Russia have forged an impregnable fortress against the 'political virus' and demonstrated the strength of bilateral strategic coordination," he said.

As to Europe, China and the European Union (EU) should not be "systemic rivals," but "comprehensive strategic partners," Wang noted.

The China-EU diplomatic agenda has been hit by the pandemic, but leaders from both sides "will keep in close contact in preparation for the 22nd China-EU leadership conference," he said.

The pandemic response efforts of China, Japan, and South Korea have set an example for the world, and the three countries will try to sign the Regional Comprehensive Economic Partnership (RCEP) agreement by the end of 2020 to speed up economic recovery for the region, Wang noted.

Jin noted that China holds different attitudes toward the US and the rest of the world and he said, "We do have reason to believe that China will win more cooperation from other countries than the US as it is confident with its successful control over the COVID-19 outbreak and economic recovery."

Li said the US is now unilaterally "decoupling" with China, but in the post-pandemic world, "it might find it is decoupling with the rest of the world."

The Chinese foreign minister said that "The impact of COVID-19 on Belt and Road Initiative (BRI) cooperation is temporary and limited. COVID-19 will only strengthen and re-energize Belt and Road cooperation and open up new possibilities."

Some temporarily suspended projects are restarting, he noted, and these projects would also be significant to any world economic recovery after the pandemic.

Wang Yiwei, director of the institute of international affairs at the Renmin University of China in Beijing, said the COVID-19 global pandemic had struck a blow to global supply chains and might influence the international community's understanding of globalization.

"Some Western countries, including the US and EU criticized the BRI, saying that connectivity would smooth the spreading of the virus," said Wang Yiwei, "but the fact is the BRI is helping with the economic development of countries along the route.

"Some groundless slandering will not affect these countries' confidence in the initiative."

There would be more public health projects emerging under the BRI and more work would be done to accomplish regional supply chains and structures, he said.