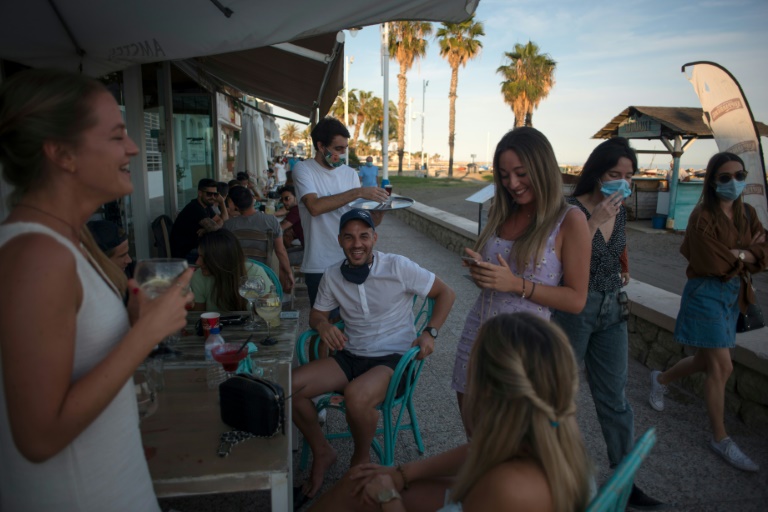 People enjoy a night out on Pedregalejo Beach in Malaga on May 23, 2020, as Spain said it would reopen for foreign tourists after one of the world's strictest lockdowns flattened the rate of coronavirus infections there. (Photo: AFP)

Spain has announced that tourists are welcome from July – but the need for the situation to remain safe means that there is still plenty of uncertainty.

The tourism industry is a key element of the country's economy, accounting for more than 12 percent of GDP, and to miss out on foreign visitors during peak summer months would be a major blow.

Spain's prime minister Pedro Sanchez has been under pressure to ease the country's tight lockdown more quickly to allow the economy to get back on track. However, at the same time there is fear that premature relaxation could lead to a second wave in coronavirus cases.

"There will be a tourism season this year," was Sanchez's big announcement on Saturday as he sought to remove doubts from the beleaguered sector. Other destinations like Italy and Portugal had appeared to have stolen a march on Spain in encouraging tourists for this summer by removing lockdown restrictions sooner.

Sanchez continued: "All the tourist establishments, bars and restaurants, beach resorts and inland locations should prepare from now to get their activities going again quickly."

From Monday further lockdown easing will take place as phases one and two are adapted. It means now, for example, that up to 10 people can go out for walks together in phase one and up to 15 in phase two.

As Spain's tourism resorts look to encourage holidaymakers, regions in phase two are allowing people on beaches – as long as they are two meters apart if they do not live together.

The government's announcement welcoming foreign tourists is good news for a sector in which many had given up on this summer. But still there is a lot of work to do in order to ensure safety and agreements between countries over travel with only five weeks to go before the start of July.

"[We are] working on the possibility of creating sound tourist routes so the sector can recover and reactivate tourist destinations," a transport ministry spokesperson told local media.

Spain's overnight death toll from the coronavirus rose by 70 on Sunday to a total of 28,748, the eighth straight day that the fatality rate has been less than 100.

Despite the cautious optimism, there is still a fear that another wave of COVID-19 infections could put the country's economic recovery in jeopardy. "We have to go very carefully," insisted Sanchez, "so that the person who comes from a safe location doesn't put themselves at risk and at the same time that there isn't a risk for the local people."