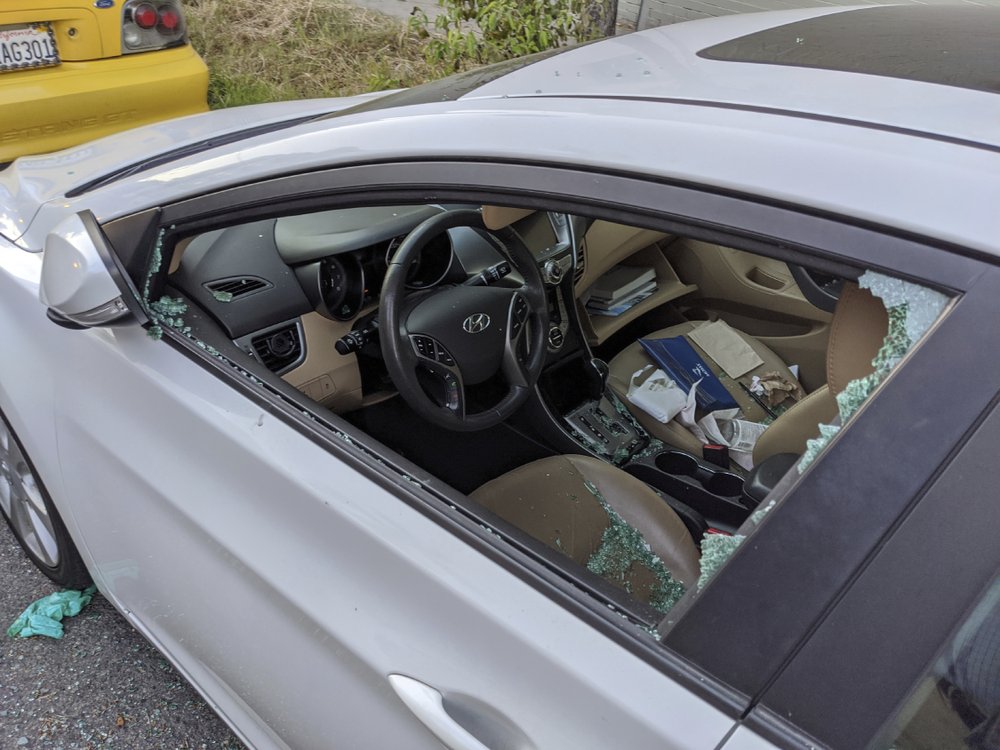 This Thursday, May 21, 2020, photo shows a parked car with a broken driver's side window after a smash-and-grab break-in in Los Angeles. (Photo: AP)

The coronavirus hasn’t been kind to car owners.

With more people than ever staying home to lessen the spread of COVID-19, their sedans, pickup trucks and SUVs are parked unattended on the streets, making them easy targets for opportunistic thieves.

Despite silent streets and nearly nonexistent traffic, vehicle larcenies shot up 63% in New York and nearly 17% in Los Angeles from Jan. 1 through mid-May, compared with the same period last year.

And many other law enforcement agencies around the US are reporting an increase in stolen cars and vehicle burglaries, even as violent crime has dropped dramatically nationwide in the coronavirus pandemic. It’s a low-risk crime with a potentially high reward, police say, especially when many drivers leave their doors unlocked or their keys inside.

“You might as well put a sticker on the window that says ‘come take my stuff,’” said an exasperated Alex Villanueva, the Los Angeles County sheriff.

In Austin, Texas, last month, a whopping 72% of the 322 stolen vehicles had their keys nearby. The total number of auto thefts in April spiked about 50%, and burglaries to vehicles were up 2% from April 2019.

The elements for that storm: Drivers are at home and not using or checking their cars regularly. School’s out, so teenagers are trying their luck. Criminals are out of work and have more time on their hands or need fast money to support a drug habit.

“You can get on the internet nowadays and learn how to break into vehicles just searching YouTube,” Vetrano said.

(He should know: Someone broke into his locked Ford F-150 pickup truck, one of the most commonly stolen vehicles, about a year ago.)

Salt Lake City police Detective Greg Wilking said a 22% spike in vehicle burglaries there could be from a few criminals working quickly on “car prowls.”

“It’s really 10 seconds,” he said. “They’re not spending a lot of time in your car. It’s a smash-and-grab-and-go,” sometimes in broad daylight.

Wilking worries the numbers will keep rising because “people get more desperate as time goes on.”

In Baltimore, though, a push to reduce the city’s historically high numbers of vehicle thefts and burglaries appears to have paid off. Thefts from autos plunged 24% and stolen vehicles dropped 19% from January to May compared with the same period last year.

Col. Richard Worley, the chief of patrol, in part credits aggressive efforts to remind residents to lock their cars, take their keys home and park in well-lit areas. In this case, however, the pandemic has actually helped police:

Residents are home, driving less and keeping an eye on the neighborhood, and officers now have time for proactive patrols because calls for service and violent crime have decreased. A thief was recently arrested with 13 stolen catalytic converters during a motor vehicle stop.

Sometimes, however, it’s just a matter of luck. Like for Lindsey Eldridge, the police department’s community outreach coordinator, who left her keys in her car’s cupholder. She realized her mistake just before falling asleep.

As Worley said: “She could have been a statistic.”