WORLD China ready for looming financial war initiated by US

China ready for looming financial war initiated by US 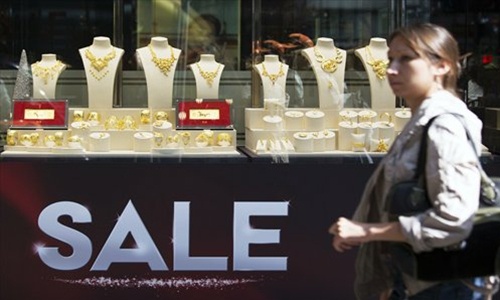 A woman walks past a sale sign displayed below gold jewelry in the window of a Chow Tai Fook store in the shopping district of Tsim Sha Tsui in Hong Kong on November 26, 2013. (Photo: CFP)

China should prepare for a potential financial showdown with the US, as the Trump administration appears to be waging a financial war on China, with crackdowns on US-listed Chinese companies and threats of sanctions over national security legislation for the Hong Kong Special Administrative Region (HKSAR), financial sector experts said on Thursday.

The experts noted China has sufficient tools to exert pain on the US, including dumping its massive holdings of US dollar-denominated assets, if the latter makes good on its threats and hurt Chinese interests including targeting the HKSAR's financial sector.

Following a multi-year trade war that inflicted much pain on the US economy and a campaign to push for a China-US decoupling that has yielded little results, US officials are now moving toward a financial war, particularly in light of the national security law for the HKSAR.

White House spokeswoman Kayleigh McEnany said that the US president is displeased by the proposed security law and found it "hard to see how Hong Kong can remain a financial hub" if the new law is imposed, Reuters reported.

In a more direct threat, US President Donald Trump also that the US government is "doing something now" when asked if he planned sanctions against China, the report noted, although he provided no details.

A Bloomberg report noted that the US government could impose transactions and freeze the assets of mainland officials and businesses for implementing the new law in Hong Kong, although no decision has been made so far on whether or how to employ the sanctions.

US officials are also seeking the delisting of many Chinese companies in the US.

In the wake of the US moves and threats, some Chinese experts warned that China should prepare for the possibility of such financial punishment, as the US is still the dominant player in the global financial sector.

"Trump knows that such actions would trigger fierce opposition from US commercial circles, particularly Wall Street... but based on Trump's past actions, he is not someone who can be logically predicted," said Witman Hung Wai-man, principal liaison officer for Hong Kong at the Shenzhen Qianhai Authority and a Hong Kong deputy to China's National People's Congress.

According to Hong, if the US feels it has to take action against China and finds itself short of other means, it might take financial actions against the mainland and Hong Kong, such as banning Hong Kong banks from entering the US or prohibiting business between Hong Kong enterprises and US banks.

Earlier, the US Senate also passed a bill that requires overseas firms to follow US standards for audits, which is considered as targeting Chinese companies, and might block some Chinese firms from trading on US stock exchanges.

Targeting Chinese companies will also hurt the US stock market and its global standing, and more direct countermeasures might be necessary from China, experts said.

"If the US takes action against China using financial means, China has sufficient ways to fire back," Dong Dengxin, the director of the Finance and Securities Institute at Wuhan University of Science and Technology, told the Global Times on Wednesday.

For example, China can dump its huge reserves of US dollar-denominated assets, which would be a "headache" for the US for fear of a dollar crash, Dong noted.

China is the second largest holder of US Treasury bonds with $1.08 trillion worth of Treasury securities in reserve at the end of March.

Dong also noted that China can take action against US companies counting on China's market as a countermeasure against US bullying.

Yang Zirong, an associate research fellow at the Chinese Academy of Social Sciences, told the Global Times China could work toward balancing US (sanctions) financially, such as internationalizing the yuan and participating in the establishment and use of the Europe-initiated independent cross-border payment system.

As for US threats on Hong Kong's capital market, Dong said it's unlikely that Hong Kong or mainland financial markets will experience wild fluctuations even under such sanctions.

"Hong Kong's stock market is an independent market. It might show some fluctuations under external pressure but a crash is unlikely, particularly as it is also backed by mainland capital with existing stock link mechanisms," he said, adding that the mainland market is even less likely to crash given the controls on capital flow.