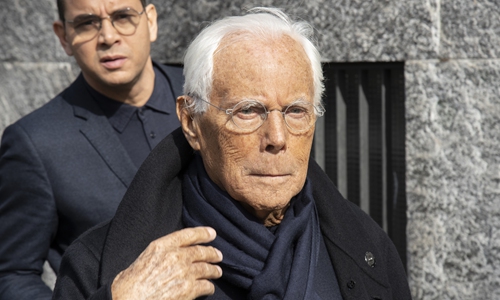 Models still walk the runway to show off the latest designs from Giorgio Armani, but the theater is empty of all guests. Due to the recent outbreak of COVID-19 in Italy, the renowned designer chose to present his runway show at Milan Fashion Week via livestream on Sunday, which was seen as a new move to save the virus-hit event.
New York and London got off easy earlier this month as they held events when the global situation was still not that bad off. However, at Paris Women's Fashion Week, which began on Monday, face masks have already become the newest must-have accessory during the show.
People, including myself, have begun to wonder if livestreaming will be a measure to be adopted by the fashion world in general?
For quite a long while, many fashionistas have complained about the decreasing influence of the world's four international fashion weeks (New York, London, Milan and Paris). In most cases, the focus of these fashion shows has not been on the new designs and special items from acclaimed designers, but on which popular showbiz stars had been invited to attend, turning these fashion weeks into a who-is-who game instead of a showcase of the latest trends.
These changes are ruining the high-cost and painstakingly-planned shows because no one seems to really care about what the new designs are. Additionally, these fashion weeks have also been criticized for wasting a large amount of money due to fashion-week travel taken by buyers, fashionistas and media as well as the hard-to-get invitations.
With these problems and troubles related to fashion weeks, "cloud" shows seem like a good solution that can make everyone happy, including designers, who after all want their work to be noticed and acknowledged.
Fast developing technologies such as AR and VR around the world, especially in China, can present audiences with top-notch live experience and visual effects. With this in mind, it is highly likely that China's Shanghai and Beijing fashion weeks will adopt "cloud" solutions for their upcoming shows amid the COVID-19 outbreak due to popularity of livestreaming in China and the public acceptance of streaming.