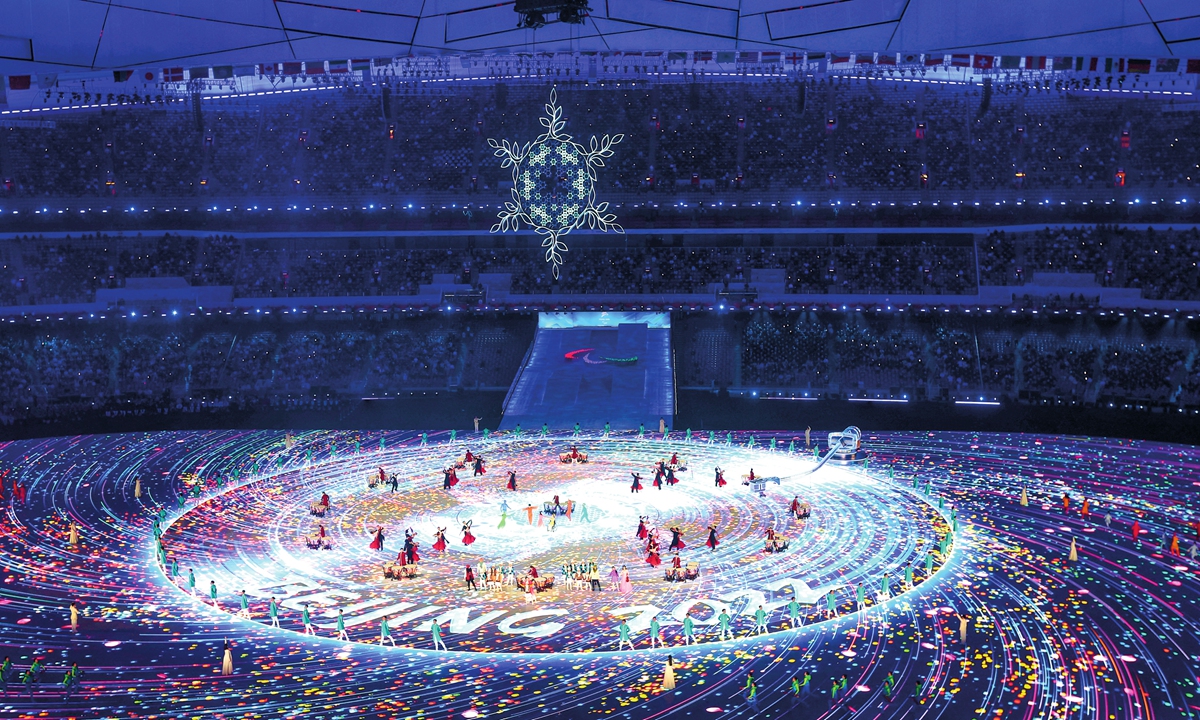 Photo taken on March 13, 2022 shows a scene of the performance during the closing ceremony of the Beijing 2022 Paralympic Winter Games at the National Stadium in Beijing. Photo: Cui Meng/GT

While the world might have not been paying the closest attention, nearly 600 para athletes from 46 countries and regions have competed at the Beijing 2022 Winter Paralympic Games, which came to an end on Sunday.

These 600 Paralympic athletes competed for more than 78 gold medals in 10 days, but also for their childhood dreams, the honor of the countries they represent and the breakthrough of human limits.

During Sunday night's closing ceremony, the lights played out in the shape of a phonograph in the middle of the ice arena in the Bird's Nest. As the record spun, some of the exciting moments from the Winter Paralympics were recreated to music.

The Chinese delegation completed a stunning breakthrough at the Winter Paralympics, taking the top spot in the medal table. But experts told the Global Times that the Winter Games are much more than that. It is about the spirit of humanity coming together, the disabled community coming into the spotlight, and the light it brings to a divided world.

Hundreds of dancers with or without disabilities dressed in different national costumes danced on the ice in the Bird's Nest to a symphony of "Winter Paralympic Waltz." The main torch was slowly extinguished as a visually impaired violinist played a song. Then, the Beijing Winter Paralympics, which lasted for 10 days, officially closed.

"At the Games, everyone is a winner," said a commentator on the official broadcaster, China Central Television.

Three weeks after the successful hosting of the Winter Olympics, the Winter Paralympics also celebrated its final chapter on Sunday.

Speaking at a news conference on Sunday morning, Cai recalled some of the impressive details of the Paralympic Games, including the opening ceremony which blends sports with performance, actors performing China's national anthem in sign language, and athletes embedding the torch in the main torch stand.

"All of these moments have moved us and conveyed confidence, love and hope to the world," he said.

"On the field of play, para athletes defied the odds, broke through barriers and boundaries, and gave the world the power of solidarity through their struggle," Zhang Yiwu, a professor at Peking University, told the Global Times on Sunday.

They reminded the world that we need to care for each other, understand each other, and work together to overcome difficulties together, Zhang said.

It highlights China's concern for the community with a shared future for mankind, its concern for the world's cause for the physically challenged, and its eagerness and affirmation of their struggles, observers noted.

And to everyone's delight, the Beijing Winter Paralympic Games were not affected by the worldwide raging pandemic.

No cluster infections occurred and no events were affected.

"Chinatastic" is the word that Swiss Paralympic medalist Theo Gmur used to describe his trip to Beijing, which he said means a "mix of China and fantastic."

"This is the best Games I have ever been [to] so far," Gmur said.

"This is also a reflection of China's role as a great power, as China has very clearly communicated through the Winter Olympics and Paralympics its strong confidence and desire for humanity to be more united and to rise above these challenges," Zhang Yiwu said.

On Sunday afternoon, when all 78 Paralympic events had finished, the name that spectators found on top of the medal rally was a bit of a surprise - Team China.

The Chinese delegation snatched a record-high 61 medals, including 18 gold medals, 20 silver medals and 23 bronze medals, topping both the total medal tally and the gold medal table.

The Communist Party of China Central Committee and China's State Council sent a congratulatory message to the Chinese delegation on Sunday afternoon, noting that their achievements fully reflect the spirit of Chinese sports and the achievements of China's human rights protection and national development, according to the Xinhua News Agency.

"In the past, the rights of the physically challenged has not been stressed, and the idea of them engaging in competitive sports was not as popular as it has become," Yang said.

However, since Beijing's successful bid to host the Winter Olympic and Paralympic Games in 2015, the protection of the rights of people with disabilities has been greatly developed throughout society.

As for involvement in sports activities, the national participation rate of community sports and cultural activities for persons with disabilities continues to increase from 6.8 percent in 2015 to 23.9 percent in 2021, according to the white paper "China's Parasports: Progress and the Protection of Rights" released by China's State Council on March 3.

In China, the country with the largest population of the physically challenged in the world, the Paralympics have had a profound impact on the group.

In 2022, 96 athletes represented Team China in all six sports and 73 events, which is China's largest ever delegation dispatched to a Winter Paralympics, nearly four times the number of athletes at Pyeongchang four years ago.

Observers point out that the outstanding achievements of Chinese Paralympic athletes have brought them into the public spotlight, and it will certainly be more conducive to the development of social security and services for people with disabilities in the future.

As the government and the entire society are willing to increase investment in the cause, it is important that China's future social development will pay more attention to the protection of the rights of people with disabilities in daily life other than in Paralympics, Wang Dazhao, a Beijing-based sports commentator, told the Global Times on Sunday.

"The Beijing Winter Olympic and Paralympic venues belong not only to the athletes, but also to everyone who loves sports," she said.

More importantly, at a time when the international situation is rapidly changing, China's successful hosting of the Winter Paralympics not only keeps humanity in pursuit of higher goals, but also brings the value of solidarity to the forefront, Zhang said.

These spirits will continue to influence the world like the legacy left to China and the world by the 2008 Summer Olympics in Beijing, observers said.

But many moments will be remembered: When records were broken, the moving moments on the field, times when the global audience forgot their troubles and applauded a group of people, the thoughtfulness of the staff and volunteers - they were a light to the world divided by the pandemic.