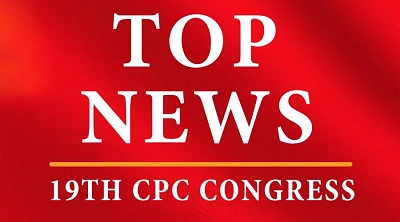 B.R.Deepak, professor of Chinese and Chinese Studies from Jawaharla Nehru University's Centre of Chinese and Southeast Asian Studies, told the People's Daily on Monday that common development, common prosperity and common security in the region, beyond and between the nations would be emphasized in the Congress. Chinese President Xi Jinping has been referring to building communities of shared destiny in his speeches. The notion will lead to integrating regional development, integrating markets and thus bringing nations and people closer to each other. Various connectivity initiatives across Asia, Europe and Africa by way of the Belt and Road initiative will be realized.

In Deepak's opinion, China has made all-round achievements in the past five years. This is impressive, for the global economic recovery remains sluggish and countries across the globe reels under economic recession. More importantly, China is undergoing economic readjustments and striking a balance between manufacturing, services and agriculture, he added.

Thanks to the "Four New Inventions,” namely high speed rail, Alipay, bike sharing and online shopping, China has unleashed the forces of domestic consumption. It helps drive China's economy, he said. The high-speed railway has expanded from 9,300 kilometers in 2012 to more than 22,000 kilometers.

Deepak said that the ongoing anti-corruption campaign is important, which has been successful in cleansing the corrupt elements from various government institutions.

Deepak also praised the "One Belt, One Road.”He said that the initiative has been the biggest innovation as far as connectivity and global rebalancing is concerned. The initiative has drawn a huge response from more than 100 countries and organizations during the Belt and Road Beijing Forum in May 2017.

The initiative has successfully connected various hinterland and coastal cities across China to Southeast Asia, South Asia, Central Asia, Russia and East Europe, offering various opportunities for win-win cooperation. China has been instrumental in creating new institutions of global governance such as the AIIB, and sharing greater responsibilities on the global stage.

The CPC has been successful in spurring economic growth, providing better public services and maintaining social stability, he added.