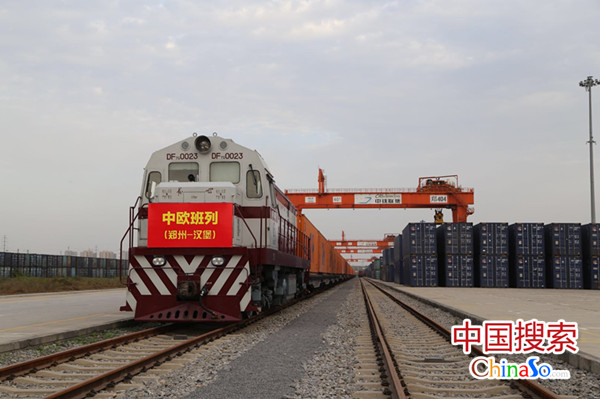 With the departure of a cargo train on Monday, the number of such trips between central China's transport hub Zhengzhou and Hamburg of Germany reached 1,000.

The train, loaded with 90 standard containers of goods such as auto parts, garments and rose seedlings, left Zhengzhou, capital of Henan Province, on Monday evening.

According to the route operator, Zhengzhou International Hub Development and Construction Co., nearly 520,000 tonnes of cargo worth 5.2 billion US dollars have been delivered since the first Zhengzhou-Germany cargo train began running in July 2013.

As of Monday, 586 journeys were made to Hamburg and 414 to Zhengzhou, according to the company.

Since the launch of the service, the frequency has increased from once a month to eight round trips a week, underpinned by the Belt and Road Initiative.

More than 1,300 kinds of goods have been carried by trains. Products are delivered to 121 cities in 24 countries in the European Union, Russia and Central Asia.

Each trip, which passes through Kazakhstan, Russia, Belarus, Poland before reaching Germany, takes 11 to 14 days, some 20 days less than the time by sea.

A number of Chinese cities have similar container freight trains to central Asia and Europe. The number of China-Europe freight trains reached a new high this year, surpassing the past six years combined, with more than 3,000 cargo trains traveling on 57 lines between the two continents, according to China Railway Corporation.