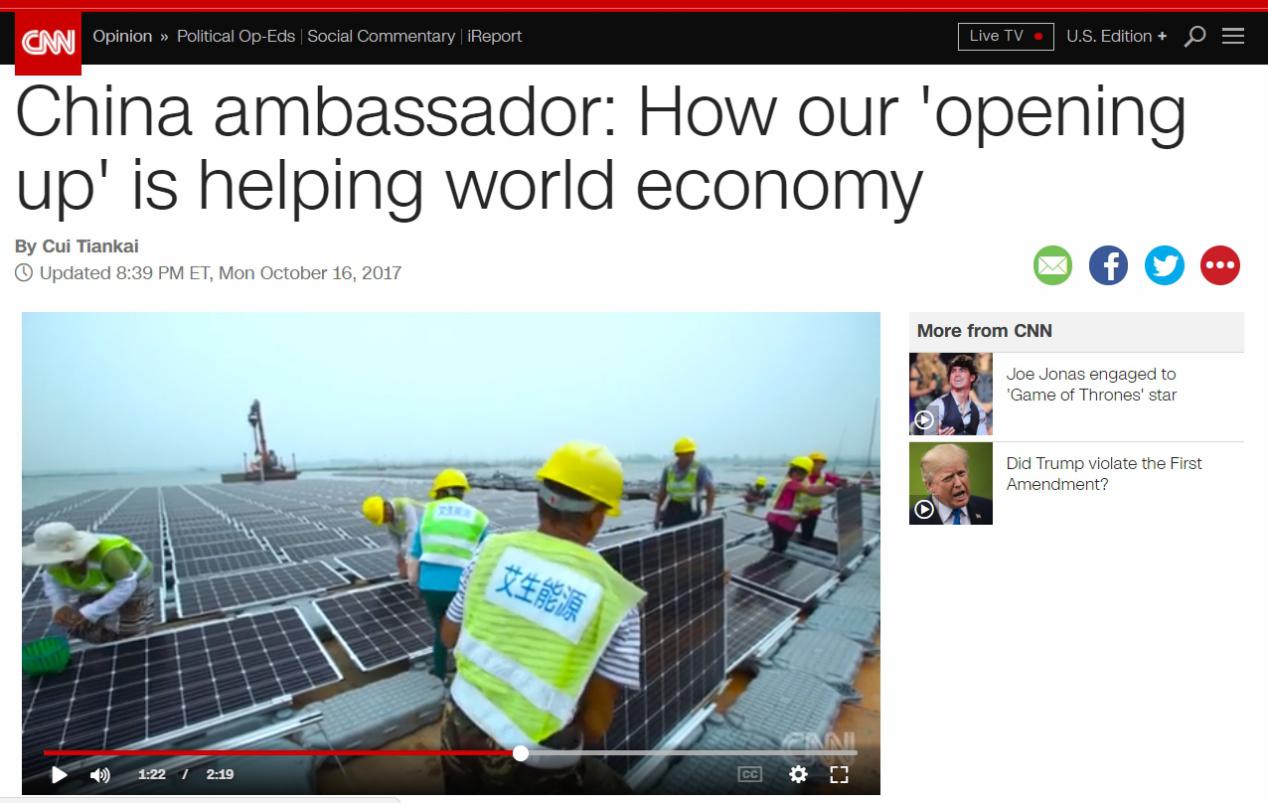 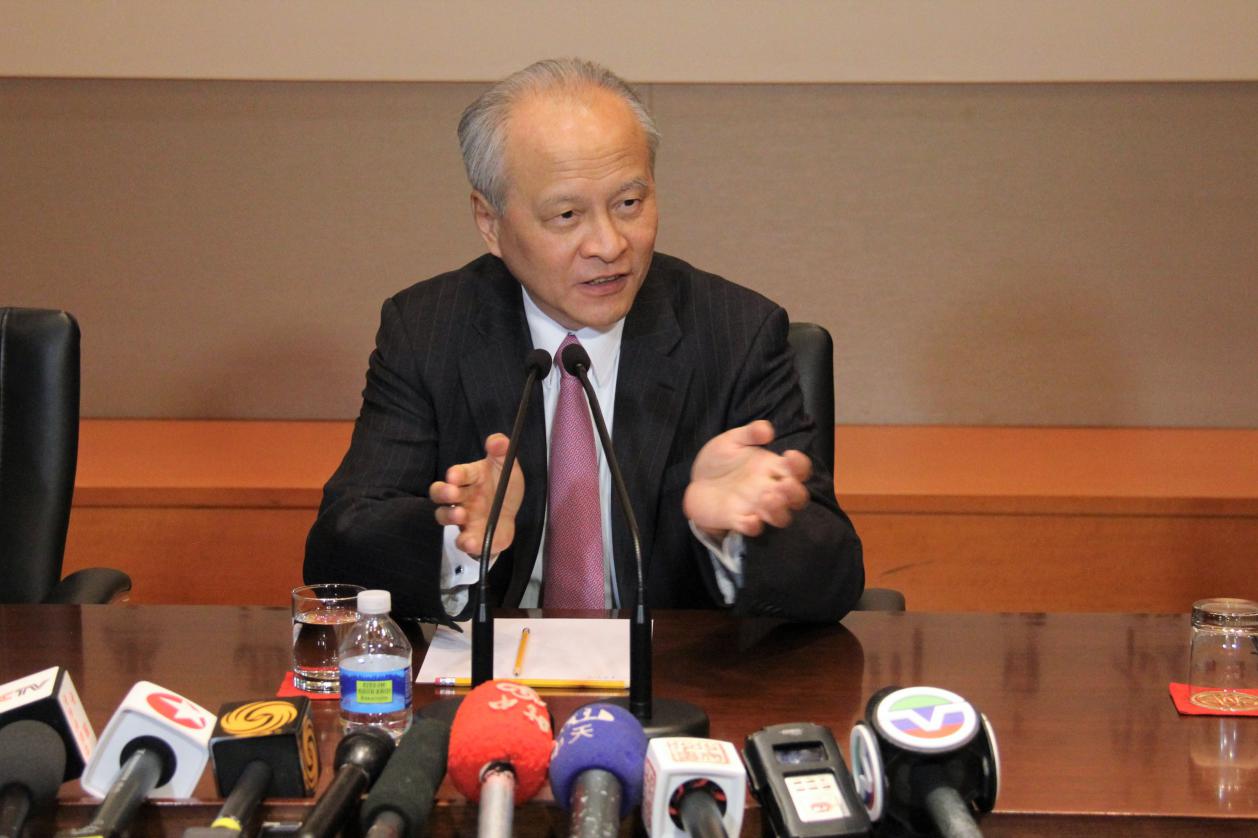 Cui Tiankai, Chinese Ambassador to the US, published an article at cnn.com on Tuesday for the upcoming 19th CPC National Congress. The full texts are as follows:

This week, China will host the 19th National Congress of the Chinese Communist Party, which will set our country's national direction for at least the next five years. This is a momentous time for China, not only because we expect that the party congress will illustrate that China's unrelenting effort in reform and opening up has added further momentum not only to its own development, but also to that of the world economy.

As we have previously shown, our party congresses can be the beginning of tremendous determination and development. And by strongly emphasizing our outward-looking vision, this year's congress promises to continue to bring about win-win scenarios for China and for our partners across the world, particularly the United States.

Five years ago, when China's 18th party congress concluded, for example, an ambitious plan was introduced by China's current leadership to build a new, open economic system. Our logic was simple: China has benefited immeasurably from our policy of reform and opening up. We also recognize that our country's future is tied to the stability and well-being of the world.

Over the past five years, we have turned these ideas into structural reform, economic growth and tangible institutions. China is furthering its economic transition with significant supply-side reform. We are upgrading our industrial structure, which involves cutting over-capacity nationwide. These reform measures, as a senior executive of JP Morgan puts it, "actually [are] kicking in" and are rewarding to the foreign investors.

China also took steps to allow foreigners to trade more extensively in the bond market, hedge their currency risk, and connect its stock markets in Shanghai and Shenzhen with Hong Kong. We have also discouraged local governments from setting up companies that borrow heavily to pay for public works.

Domestically, the quality of life of the Chinese people saw a marked improvement. The average life expectancy in China reached 76.34 years in 2015, compared with 74.83 years in 2008. More than 700 million people have been lifted out of poverty since 1978, according to the World Bank. Internationally, China remains a leading performer in economic growth -- according to China's National Bureau of Statistics, GDP grew 6.7% to 74.4 trillion yuan (10.8 trillion US dollars) in 2016 -- and contributes more than 30% of global growth.

China, especially since the last party congress, also took steps to increase contributions to international economic governance, both through strong endorsements of globalization and free trade in the international arena and through groundbreaking endeavors like the Asian Infrastructure Development Bank, a new multilateral investment bank to address Asia's infrastructure needs, and the Belt and Road Initiative, a groundbreaking initiative to increase connectivity on the Eurasian continent.

Through approaches like these, we seek to bring the whole world forward by closing gaps in development and poverty -- which undermine global security -- while also engaging with partners like the United States in new and mutually constructive ways.

The United States, as China's second largest trading partner, has benefited immensely from these initiatives. According to a report from the US-China Business Council, a private, nonpartisan, nonprofit organization of roughly 200 American companies that do business with China, China purchased $165 billion in goods and services from the United States in 2015, and the number is growing rapidly.

In the first half of 2016, according to the same report, General Motors sold 1.8 million vehicles in China (400,000 more than in the United States), while Ford Motor Company sold 580,000 vehicles in the same period.

A report by the National Committee on US-China Relations and the Rhodium Group found that Chinese companies directly employ more than 140,000 Americans, often in areas that were left behind by globalization -- such as in Moraine, Ohio, where Fuyao Glass Industry Group has created over 1,500 jobs in an abandoned General Motors plant. Overall, the US-China Business Council report shows that 2.6 million US jobs are supported by the China-US bilateral trade relationship.

The mutual opportunities afforded by a globally engaged China are not always on the mind of the United States. While we have many areas of cooperation that promote global economic stability, there are still some issues that could threaten to weaken the relationship as a whole.

For example, the Section 301 investigation recently initiated by the US Trade Representative with respect to intellectual property, the overemphasized trade imbalance between the two countries, the misunderstandings about China's debt, and the treatment of foreign investment based on each other's appeals are all major concerns for the bilateral relationship. However, through dialogue, our two countries can address these concerns, which in turn will benefit the global economy.

Our success demonstrates that an open and more prosperous China can benefit the world. As China continues to develop its own economy and to strengthen the China-US economic relationship, our efforts will bring even bigger benefit to the US economy and the livelihood of the American people. Economists expect US exports to China to rise to more than $520 billion by 2030, as China is expected to continue to be one of the world's fastest growing economies.

As we go into this week's Party Congress, we do so with great optimism and a high regard for our partnership with the United States. If we continue to work together in the economic sphere and beyond, the whole world is sure to benefit.