The 2020 China International Fair for Trade in Services (CIFTIS) kicked off in Beijing on Sept. 4. Chinese President Xi Jinping delivered a speech at the event. 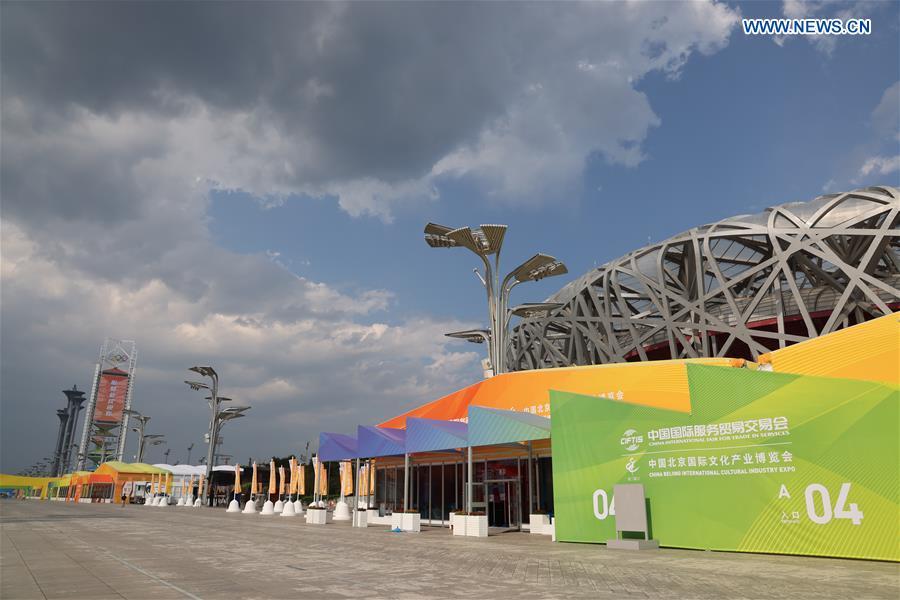 Photo taken on Sept. 2, 2020 shows the outdoor exhibition area of the China International Fair for Trade in Services (CIFTIS) in Beijing, capital of China. The CIFTIS is to be held from Sept. 4 to 9. (Photo: Xinhua)

Xi proposed to work together to foster an open and inclusive environment for cooperation, unleash the power of innovation in driving cooperation forward, and promote mutually beneficial cooperation.

His remarks won wide recognition and appraise from the participants to the event, who said China’s holding of the CIFTIS showcased the sense of responsibility of the major country. Looking forward to new development opportunities in China, they believe China is not only a demand side, but also a propeller.

The 2020 CIFTIS, as a major global economic and trade event held during COVID-19, has received high attention from the world.

“We hope that this year’s CIFTIS, held under the theme of ‘Global Services, Shared Prosperity,’ will present an opportunity and serve as a platform and a bridge for people from across the world to fully showcase the new progress and breakthroughs in services trade and share in the new technologies and benefits of human progress,” Xi said in his speech.

“Argentina is proud to take part in the event,” said Argentine President Alberto Fernandez. He noted that Argentina hopes to continue deepen its relations with China, and the two sides can carry out cooperation on the platform of the CIFTIS to drive the development of industries of both countries.

The severe COVID-19 situation is still adding uncertainties to the world economy. Therefore, countries need more than ever to jointly combat the virus and promote economic development. The CIFTIS, establishing an international exchange and cooperation platform of trade service, plays an important role in promoting the stable economic development of the world.

Thai Prime Minister Prayut Chan-o-cha said the 2020 CIFTIS will become an important platform for global countries to discuss cooperation and jointly plan for future development, and help them better handle the new challenges for global economy.

Deputy Prime Minister of South Korea Hong Nam-ki noted that the world is undergoing a crisis in which countries need to support and help each other. He said he hopes the CIFTIS can become a success and make huge contribution to deepening global cooperation on trade in services.

With the in-depth development of economic globalization, trade service is increasingly becoming an important part of global trade and a vital area for international economic and trade cooperation, injecting new energy into global growth.

Mukhisa Kituyi, Secretary-General of United Nations Conference on Trade and Development (UNCTAD) said this year’s theme “Global Services, Shared Prosperity” mirrors UNCTAD’s own goal of prosperity for all. International cooperation on trade in services should be a key element of the policy agenda, and the global countries shall build on the common lessons both China and UNCTAD can share, so as to realize the Sustainable Development Goals with better development of the service sector.

Xi declared a series of measures of China to further open up, which inspired the participants. He said China will further ease market access for the services sector, and will take greater initiative to increase imports of quality services. Besides, the country will also support Beijing in developing a national integrated demonstration zone for greater openness in the services sector, and support it in setting up a pilot free trade zone characterizing scientific and technological innovation, opening-up of the services sector, and digital economy.

Meng Pu, Chairman of Qualcomm China, told People’s Daily that the company deeply feels China’s confidence in and resolution to keep promoting opening-up and cooperation, saying the progress of the communication industry has benefited from the close cooperation of economic globalization. COVID-19 has brough challenges to the global industrial chain, but it also proved that the global communication industry is integrated and inseparable, he added.

From the 2018 Boao Forum for Asia to the two China International Import Expo, and to the 2020 CIFTIS, China has been constantly rolling out new measures of opening up, providing new opportunities for common development of the world. In the future, China will keep expanding its openness to the outside world regarding trade in services, import more quality services, and actively enlarge export of services, so as to improve its international competitiveness.

China’s continuously expanding opening-up not only develops China, but also benefits the world. Vice chairman of Thai Chamber of Commerce in China Kriangsak Sae-tang noted that Xi has stressed for times that China’s door to the outside world will only open wider, and such firm resolution demonstrated China’s determination to opening-up, and also boosts confidence of Thai enterprises in China. He said he has confidence in the future of China-Thai economic and trade cooperation.

A multi-level, broad and high-level new pattern of opening up is shaping up in China, said Raymund Chao, Asia Pacific and China Chairman of PwC China. China, by increasing its quality of opening-up, will create more opportunities for global countries to share its development dividend.

Tom Simpson, managing director of China Operations and Chief China Representative of China-Britain Business Council said he was impressed by Xi’s remark in the speech that “the world economy thrives in openness and withers in seclusion,” as openness is indispensable for an export-oriented economy known for its service sector like the UK.

He told People’s Daily that he was glad to hear Xi stress that China will remain steadfast in opening its door wider to the world. To build an open world economy shall be a common goal and direction for the world, he added.