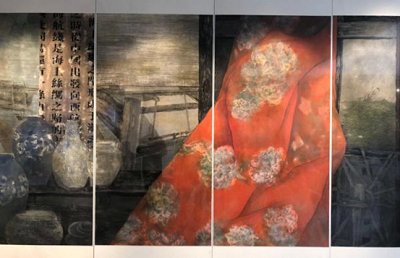 A part of the painting (Photos: Paper)

A 60-meter long scroll painting, “Maritime Silk Road”, is on display at an exhibit organized by the Shanghai Painting and Calligraphy Academy and Shanghai Long Museum of Modern Art. 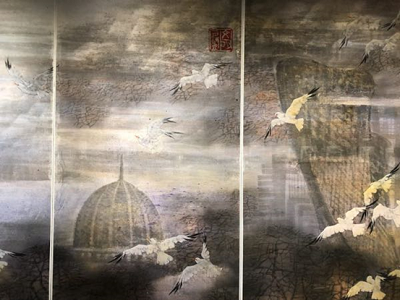 A part of the painting.

The work was painted on a traditional Chinese long scroll reflecting the theme of the “Maritime Silk Road” in the Belt and Road Initiative. On the painting, we can find items with strong Chinese characteristics, like red silk, giant wooden ships, porcelain jars and green tea. On the incomplete old papers are some simple and elegant Chinese characters, “The Maritime Silk Road, formed at the time of Emperor Wu of Han, starts from China to the west…”

The painting shows a mix of eastern and western art in its conception, depth, skill and presentation, with highlighted innovation. 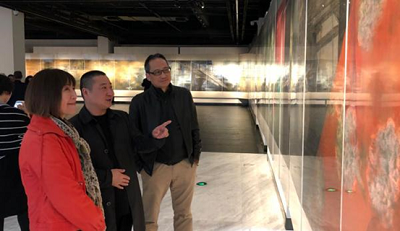 Ding Yiming, organizer of the exhibit and Executive Director of the Shanghai Painting and Calligraphy Academy, said the artwork began in the first half of last year, focusing on the theme of BRI and Maritime Silk Road. Painters were taken on field trips to Fujian and Guangdong Provinces and held discussions. Experts were also invited to evaluate the work and give advice for modifications, laying the foundation of the ultimate work.

Xiao Haichun, a renowned painter, said he appreciates the painting, adding that the display is ingenious and an excellent plan and organization. 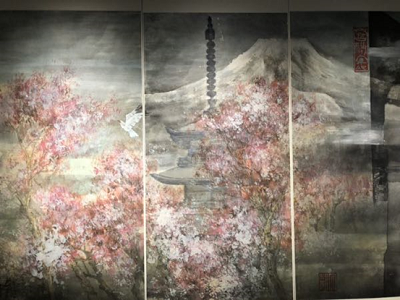 A part of the painting.

The Maritime Silk Road is the channel of exchanges between China and other areas in ancient times. It is not only a road of trade but also a bridge for cultural communications. The 21st century Maritime Silk Road connects China with ASEAN countries, India, Pakistan, Bangladesh, Sri Lanka and other countries or regions, which greatly contributes to the communications and developments.

The painting is one of the great achievements of Shanghai’s large painting projects in recent years. The exhibit also displays the works of artists during the creation of this masterpiece.