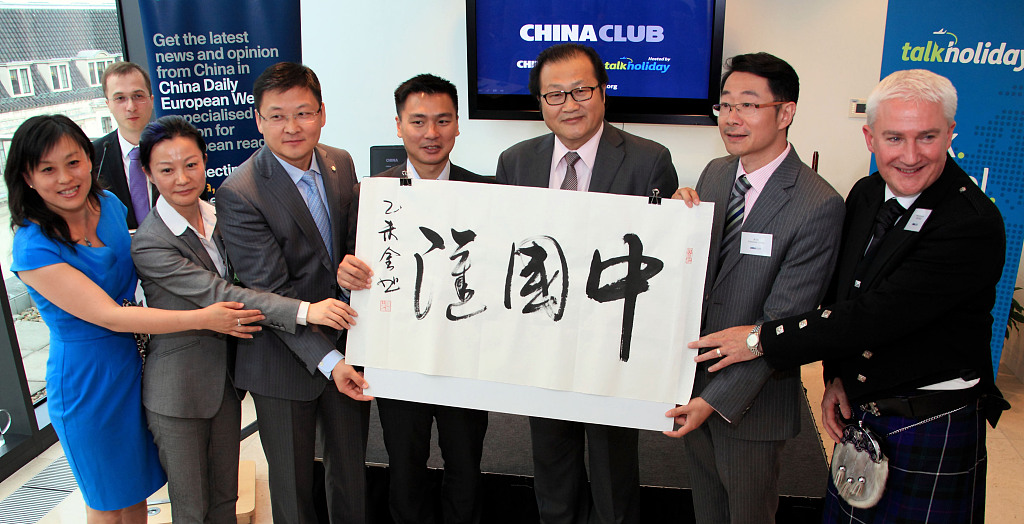 LONDON, Sept. 2 (Xinhua) -- In a serene cemetery in north London, Stephen Perry, chairman of Britain's 48 Group Club, gently laid a bouquet on a corner of a lawn. His father Jack Perry, known as the "icebreaker", rests here.

"I wouldn't be where I am today if it were not for my father," said grey-haired Stephen with moist eyes. His daughter Judy stood beside him, holding his hand.

In 1954, during the Cold War, Jack Perry led a group of 48 British businessmen in an "icebreaking" mission to Beijing and helped establish one of the first modern-day trade links between China and the outside world after the founding of the People's Republic of China in 1949. The 48 businessmen later formed the precursor of the famed 48 Group Club that helps forge relations between China and Britain.

Seventy years on, China, the previously poor, isolated country, has risen to the world's second largest economy, with an increasingly significant sway on the global stage.

According to his father's will, no tomb stone was ever erected in the cemetery. Without special guidance, visitors would certainly walk by without noticing the patch of green grass under which his father's ashes were buried.

But his father not only left an indelible mark on the history of China-UK relations, but also helped Stephen and his family bond with China in a most intimate way.

In 1972, 24-year-old Stephen landed in Shanghai on his first trip to China, during which his father and he helped seal the first trade deal between America and China on selling U.S. products including polyester, agricultural chemicals and cotton.

During the visit, Stephen noticed large stretches of rice paddy fields, hard-working Chinese peasants and inadequate roads between cities, and saw the country's enormous growth potential. He decided to devote himself to helping Westerners understand China that many in the West often misread.

In 1993, Stephen took over the helm of the 48 Group Club and continued promoting the China-UK bilateral pragmatic cooperation and friendship. The club now has over 600 British and Chinese members, including senior executives, high-level politicians, diplomats and scholars.

Due to his outstanding contribution to improving China-UK ties, Stephen was awarded China reform friendship medal in Beijing on Dec. 18, 2018, together with nine other foreigners during a conference marking the 40th anniversary of China's reform and opening up.

Stephen said he hailed China's continued commitment to reform and opening up, especially against the backdrop of rising protectionism and unilateralism.

The China-proposed Belt and Road Initiative "is transforming the world," said Stephen, as it has not only helped build infrastructures but also helped create opportunities for new cities and new populations along its routes.

Stephen said the Chinese concept of building "a community with shared future for mankind" has been incorporated into various international bodies such as the United Nations, and the world has a real chance to change for the better. "It's what China's done," he said.

China's growing influence makes communication between China and the West ever more important, said Stephen, noting that it could take decades or generations to fill the "culture deficit."

In 2008, a new network named The Young Icebreakers was established to act as a bridge between Chinese and British young professionals, and Stephen's daughter Judy has been actively involved in it.

"Ice breaking is a long-term mission," said Stephen, who seemed determined and reassured.

His daughter stood closely at his side as a ray of sunshine beamed through the cloud. The patch of grass under which his father rests looked even greener.