A new stage for China-Mauritius ties 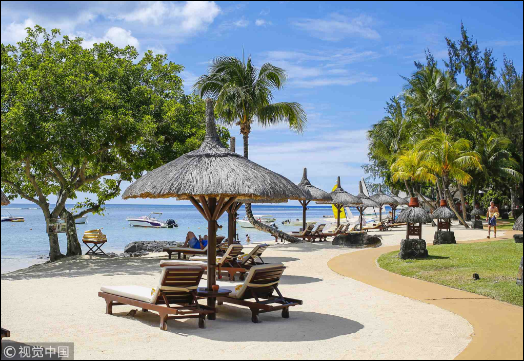 Dec 07, 2016: The Beach with sunbeds and parasols at The Oberoi Hotel in Turtle Bay, Mauritius.( Photo: VCG)

With the implementation of the mutual visa waiver program and the opening of direct flights, Mauritius, “the pearl of the Indian Ocean”, has become an increasingly popular tourist destination for the Chinese.

What is little known, however, is that Mauritius has always been closely connected with China. A minister of Chinese descent, a Chinese figure on the local currency, the first overseas Chinese culture center, and the Spring Festival as a public holiday are all evidence of this connection.

For the 30,000 residents of Chinese descent and for all people in Mauritius, the word “China” not just represents a distant land, but also carries a special significance.

China is a trusted partner of Mauritius. It has supported the struggles of Mauritius in upholding its national independence and sovereignty, and has consistently supported other countries’ sovereignty and territorial integrity.

It has actively demonstrated its leadership as a major country in the issue of climate change, and has therefore been strongly committed to the green transformation of its economic development. China sees eye to eye with Mauritius in a wide range of areas, and as such, is a reliable partner for Mauritius.

Mauritius is committed to the “Belt and Road Initiative “proposed by China. Located on a key shipping route in the Indian Ocean, Mauritius represents a key node on the widespread implementation of the Initiative.

Having always emphasized to leverage its role as a gateway between Asia and Africa, the government of Mauritius aspires to offer stronger support to the implementation of the “Belt and Road Initiative”.

During President Xi’s visit, the two countries will explore the plans and the pathways for Mauritius to partake in the Initiative, and create a new vision for China-Mauritius cooperation.

China is the spiritual home of the tens of thousands of people of Chinese descent in Mauritius. There are around 30,000 residents with Chinese roots in Mauritius, accounting for about 2.3 percent of the total population, which explains the cultural affinity between the two countries.

The face of Moilin Jean Ah-Chuen, a renowned Chinese-Mauritian, is printed on the bills issued by the Mauritian authorities in honor of the contributions made by him and the entire Chinese community behind him to the development of Mauritius.

Guan Yu Temple and Puji Temple are bustling with visitors, and Chinese language newspapers have been in circulation for a very long time. All these are signs of the unique significance of the Chinese culture in Mauritius.

The visit by President Xi will bring the Chinese community in Mauritius closer to the motherland, and boost cultural and people-to-people exchanges between the two countries.

An average of 100,000 visits has been made by Chinese tourists to Mauritius, which makes China the fastest growing tourism market for Mauritius. With more mutual visits and more frequent cultural exchanges, the hearts of the two peoples will be brought closer together.

China is an important economic partner for Mauritius, which has an open financial market and a mature economy. As a member of the African Union, the Southern African Development Community (SADC), the East African Community, and Common Market for Eastern & Southern Africa (COMESA), Mauritius is the gateway to Africa by any measure.

Mauritius will host the 10th Indian Ocean Island Games, which will boost its demand for infrastructure such as sports arenas, an area with great potential for cooperation with China.

The two countries enjoy close economic and trade ties, manifested by the Joint Committee on Economy, Trade and Technology Cooperation. With a total trade volume of 880 million US dollars in 2017, China has become the second largest trading partner and the largest import origin for Mauritius.

The two countries are currently in talks on a free-trade agreement. During President Xi’s visit, discussions will be had on making further trade arrangements and agreements, which will deliver fresh impetus for the economic and trade cooperation between the two countries.