Academic exchange, travel to Australia impacted by coronavirus outbreak despite signs of easing 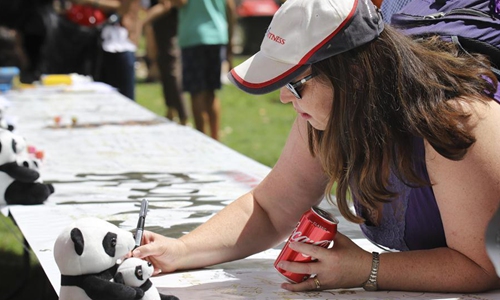 Academic exchange and travel between China and Australia has been hit hard by the COVID-19 outbreak as students planning to go to Australia are facing up to stringent travel bans.
Travel agencies have canceled tours to Australia as Canberra on February 1 announced a ban on people arriving from or transiting through the Chinese mainland from entering Australia.
A customer service operator for Chinese online travel agency Ctrip.com told the Global Times on Sunday that no package tours to Australia can be booked before May 31.
Customers who booked such tours can cancel and get a refund, the operator noted.
Many students stuck in China over Spring Festival have opted for a third country to enter Australia.
A Master's student surnamed Yu at the University of New South Wales told the Global Times she planned to fly to Thailand on Wednesday and stay there for two weeks, then fly on to Australia.
Yu said her university was supporting students, for example by subsidizing their stay at a third country for quarantine or allowing them to defer admissions if they could not return on schedule.
An estimated 100,000 Chinese students enrolled at Australian schools are held up by the travel ban and stuck either on the Chinese mainland or at a third country, Australian media reported.
Australian media reported Saturday the country would ease travel restrictions on Chinese high school students outside the epicenter Hubei Province, but university students reached by the Global Times said they were still prevented from enrollment.
None of the Chinese visiting scholars with offers from Australian universities reached by the Global Times as of Sunday have been granted visas since the virus outbreak.
"The visa process for visiting scholars seems stopped," said a scholar at the University of Melbourne who only offered the surname Shen.
Shen is in a chat group with more than 200 PhD candidates and visiting scholars awaiting visas from Australia. Their visas have been delayed months already, with no clear explanation.
A PhD candidate surnamed Liu with an offer from Monash University in Melbourne said he obtained the visa on January 31 after waiting about seven months, but after the virus outbreak, he was forced to wait again. Liu has to wait for the travel ban to be lifted so that he can enrol in school.
The Australian government has extended its travel ban twice and it will last until at least February 29.
A Chinese student at an Australian university who requested anonymity said that he felt a bit depressed about the ban's one-size-fits-all approach. Chinese students in good health who haven't travelled to Hubei should not be excluded, he believed.