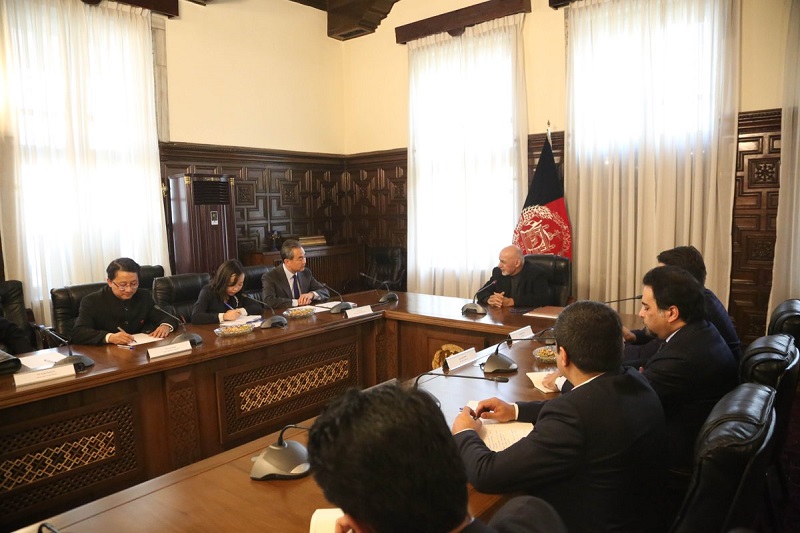 Wang said the Chinese side is willing to work with the Afghan side to implement the consensus reached by leaders of the two countries, and push forward the bilateral strategic cooperative partnership for further development.

Afghanistan is China's important partner to jointly implement the Belt and Road Initiative, and China is willing to expand bilateral trade and investment with Afghanistan and help Afghanistan speed up its reconstruction and development process, Wang said.

China appreciates Afghanistan's efforts in fighting the East Turkistan Islamic Movement, and will continue to offer support and help for Afghanistan's anti-terrorism capacity building, he said.

Wang said the Chinese side appreciates the measures of the Afghan government in promoting the reconciliation process and supports the international community to play a constructive role on the matter.

For his part, Ghani said his country is willing to deepen pragmatic cooperation with China, expand trade and increase personnel training.

The Memorandum of Understanding (MoU) on Counter-Terrorism signed by Afghanistan, China and Pakistan will strongly push forward the regional anti-terrorism cooperation, and the Afghan side will continue to firmly strike all forms of terrorism, the Afghan president said.

The Chinese state councilor said the two countries have witnessed friendly development of bilateral relations thanks to the support from the leaders of both sides and the two peoples.

China is willing to work with Afghanistan to further strengthen personnel training, enhance local-level cooperation, improve people's livelihood, steadily advance the aid programs for Afghanistan and further push forward the cooperation in all fields between the two sides, he said.

Wang said the 2nd China-Afghanistan-Pakistan Foreign Ministers' Dialogue has achieved positive results and reached consensus. On the basis of fully respecting the willingness of the Afghan side, China is willing to continue playing a constructive role and support the Afghan government in pushing forward the Afghan-led and Afghan-owned reconciliation process so as to achieve the inclusive political reconciliation at an early date.

China appreciates the progress achieved in the improvement of relations between Afghanistan and Pakistan, supports the two countries to strengthen dialogue, promote mutual trust and continue to improve bilateral relations. China is willing to work together with the two countries to deepen anti-terrorism cooperation and fight terrorism in all forms, Wang said.

Abdullah, for his part, said the two countries have witnessed the sound development of bilateral ties with cooperation in every sector yielding fruitful results.

Afghanistan is devoted to pushing forward the peace process in the country and is willing to continue improving ties with Pakistan, Abdullah added.