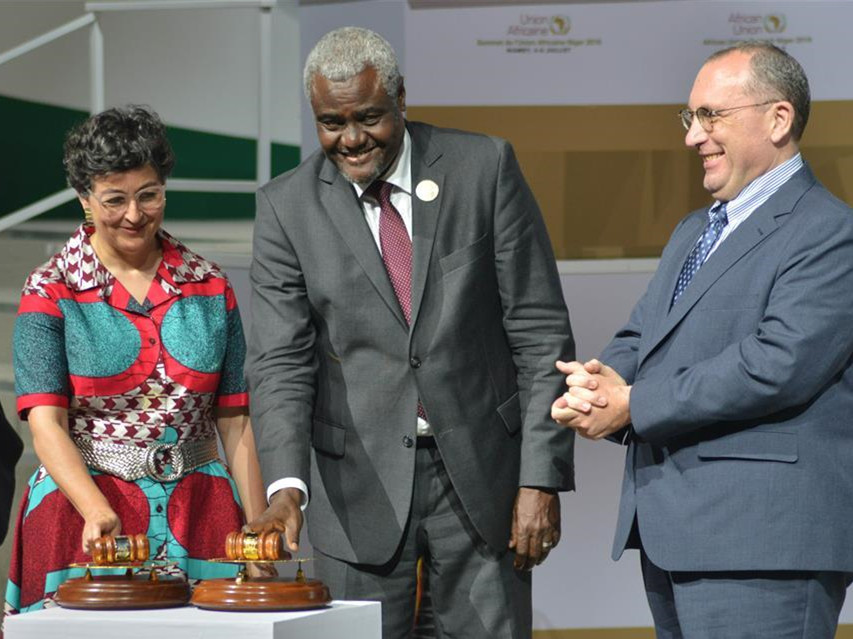 The launch occurred at the 12th Extraordinary Summit of the African Union (AU) Heads of State and Government in Niamey, capital of Niger.

Chairperson of the AU Commission, Moussa Faki Mahamat, hailed the launch of the free trade pact as a "historic moment" in Africa's history, especially toward the realization of the 50-year African development Agenda 2063.

"The speedy entry into force of the AfCFTA has been a major pride to all of us," Faki said. "Niamey marks the history of a new era in Africa's integration."

"More than just a free trade area, the AfCFTA is by excellence the instrument for industrialization and integration with an objective of the aspirations of the Agenda 2063," the head of the 55-member pan-African bloc said.

It came into force on May 30, after the deposit of the required minimum of 22 instruments of ratification by AU member states to the AU Commission.

Egyptian President Abdel Fattah al-Sisi, who is also the current chairperson of the AU, hailed Sunday as a remarkable moment in Africa's quest toward improved trade and integration.

United Nations Deputy Secretary-General Amina Mohammed also stressed that the start of the operational phase of the continental free trade pact is "a momentous moment."

She urged the African countries to effectively harness the potential of the free trade pact.

The AfCFTA, which was launched on March 21 last year in Kigali, capital of Rwanda, also on Sunday added Nigeria, Africa's most populous and largest economy, and Benin to its growing list of signatories, leaving Eritrea as the only member of the African Union that has not signed onto the historic accord.

The AfCFTA, among its major aspirations, calls for a single continental market for goods and services, with free movement of business persons and investment, paving way faster establishment of a customs union.

Once fully operational, the free trade accord is projected to boost the level of intra-Africa trade by more than 52 percent by the year 2022, according to the UN Economic Commission for Africa.

According to the AU, the AfCFTA "has laid the foundation" for what could be the world's largest free trade zone by the number of participating countries, covering more than 1.2 billion people with a combined gross domestic product of 2.5 trillion U.S. dollars.