Artificial intelligence (AI) has become a new area of China-Russia cooperation that will provide renewed impetus to bilateral trade and investment, analysts and industry experts said on Sunday. 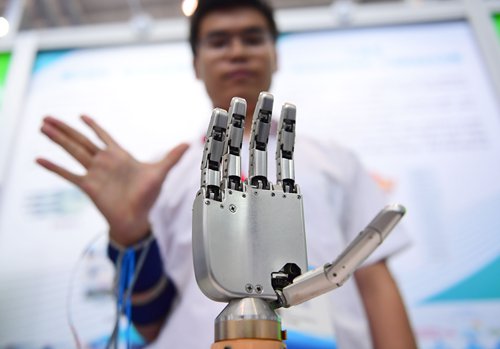 A scientist from the Harbin Institute of Technology operates an intelligent prosthetic hand in Shenyang, Northeast China's Liaoning Province in September 2018. (Photo: VCG)

The comments came against rising calls by officials and experts from the two countries to develop high-tech cooperation, with AI as a major focus, to generate new mutual benefits.

China and Russia probably achieved their target of $100 billion in bilateral trade in 2018. To meet a more ambitious target of $200 billion by 2024, AI will play a role, analysts said.

Chinese Ambassador to Russia Li Hui said in an interview in October 2018 that the two countries should increase the quality of bilateral cooperation and treat the digital economy as a new growth engine.

AI was identified by Li as a factor along with big data, the internet and smart cities.

Rajiv Biswas, APAC chief economist with IHS Markit, said that the internet of things (IoT), big data and AI are increasingly critical for China's industrial shift toward a high-technology economy.

"The Chinese government has placed a high priority in investing in AI, which is critical to building a high-technology industrial sector that is globally competitive. Russia will be a key future partner for China in the area of AI, due to the high-level R&D capabilities of Russian universities and research institutes," Biswas told the Global Times over the weekend.

Chinese government initiatives to boost public expenditure on AI and to build international cooperation with key research and development (R&D) leaders such as Russia will be important to building China's AI capabilities, Biswas noted.

"High-tech cooperation including AI will be the next highlight of China-Russia cooperation. Reciprocal and mutually empowering, such cooperation now covers the fields of talent, technology and manufacturing techniques. The cooperation has already shown some results," according to Song Kui, president of the Contemporary China-Russia Regional Economy Research Institute in Northeast China's Heilongjiang Province. Such cooperation will form a new type of China-Russia relationship, Song told the Global Times on Sunday.

AI supremacy rests in having vast computer power, enough data for machines to learn from, and the human talent to operate those systems, experts said.

China leads the world in AI sub-categories such as connected vehicles, and facial and audio recognition technologies, while Russia has manifest strengths in industrial automation, AI applications in defense, security and anti-surveillance, according to an article on tech news site 36kr.com on January 14.

In a demonstration of its AI prowess, Russia became the first country to test a drone tank in the battlefield in Syria, according to media reports in 2018.

Zhao Zhiqiang, chief technology officer of the Harbin Institute of Technology Big Data Group, said despite calls from government officials and experts, there have been few results from China-Russia AI cooperation at industrial level.

"Mainly it is cooperation on the levels of talent, research and development and developing applications. Russia's advanced basic science education system has turned out lots of talented people and some of these people are recruited by Chinese AI firms," Zhao told the Global Times on Sunday.

"China has made integration of informatization, digitalization and industrialization as a strategic national policy. I hope Russia has a similar arrangement. If so, I am sure there will be more cooperation on the industry and enterprise level with commercialization as the goal," Zhao said.

According to a local news outlet in October 2018, the Nangang district of Harbin, traditionally an industrial city and a defense technology hub and now a top city in the development of AI, is seeking to engage in AI cooperation with Russia.

"Under the framework of the Belt and Road initiative and the Eurasian Economic Union, AI, the internet and IoT can flourish in a world without national borders. Different applications for AI include aeronautics and aerospace, Russia's Glonass and China's BeiDou satellite navigation systems, and allowing AI to harness advanced human experience in manufacturing," Zhao said.

When opportunities are mature, Russia will be a vast market for Chinese-developed AI applications, Zhao noted.

With both China and Russia being leaders in AI technology and R&D, closer bilateral cooperation is likely under various joint technological cooperation projects, Biswas said.

The Russian government is doubling down on AI investment, with a national AI roadmap expected to be released in mid-2019, while media reports have suggested related funding will almost double for the 2019-20 period to a total of $719 million.

Closer co-operation between China and Russia on AI will also be fostered under the BRICS and the Russia-China Investment Fund.

Song said that as China-Russia AI cooperation gains momentum, it might have an impact on the international market.