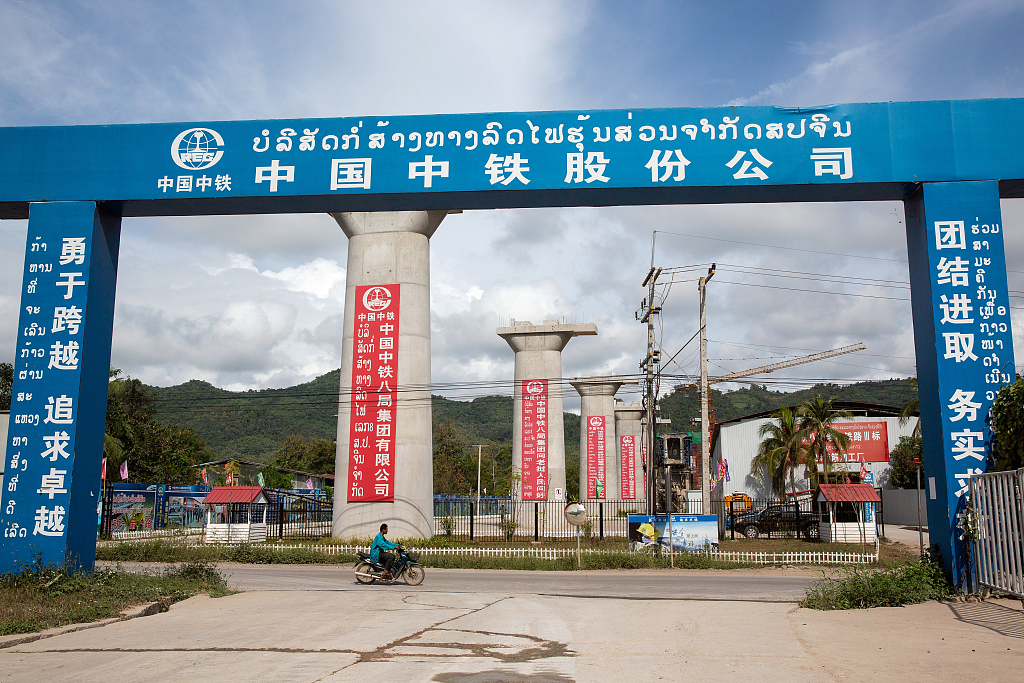 VIENTIANE, Aug. 16 (Xinhua) -- Baly Sipaseuth, 38, a victim of last year's overwhelming flood caused by a dam collapse in southern Laos, has experienced an amazing year after joining the construction of the China-Laos railway, he told Xinhua recently.

"I am Baly. I have been employed to work for CREC-2 (China Railway No. 2 Group) Laos-China Railway Vientiane Beam Fabrication Yard around one year. Just now I got my monthly salary," Baly said.

"One year ago, because of the dam collapse in Attapeu, all of my crops and livestock were destroyed by the flood," he said.

On July 23, 2018, the under-construction saddle dam of the Xe-Pian Xe-Namnoy hydropower project collapsed, leading to a huge amount of water into 13 villages of the Sanamxay district of Attapeu province, some 560 km southeast of Vientiane. Six villages were severely damaged and 42 people lost their lives with 23 still unaccounted for. In total, 13,000 people were affected with over 6,000 people left homeless in the floods.

"In the event of emergency, the rescue teams from Laos-China Railway Project rushed to our village, and helped us construct the road and bridges," Baly said.

At the request of Lao government, the Chinese engineering companies, along the China-Laos railway construction sites, have donated cash and materials to the disaster-hit areas and offered assistance to build four bridges urgently for access to the flooded villages of Attapeu Province.

In less than 50 days, the CREC-2 and Sinohydro Bureau 10 under China Power, with guidance from the Laos-China Railway Company, completed the construction of four brand-new quality bridges in flooded Attapeu. To honor the achievement and contribution of the Chinese engineering companies, Lao Prime Minister Thongloun Sisoulith signed an order of commendation for the Laos-China Railway Company, CREC-2 and China Power. On behalf of the government, Lao Minister of Public Works and Transport Bounchan Sinthavong conferred development medals to the three companies last September.

"However, most of us registered positively, Because we knew, there were jobs, and there's the hope."

"I could only do some easy work at the beginning. After we were familiar with the work environment, the project management department organized us for training, taught us to fabricate the T-shaped beam, and taught us the safety regulations. Because I have never had such kind of experience before, and also because of the language and communication problem, I felt really difficult," Baly added.

"The Chinese technicians instructed us with patience, I gradually understood our work, and I have fitted in with my work. Now, like our Chinese friends, I can finish some procedures alone. And I begin to teach my skills to other Lao workers."

"The T-shaped beam is adopted in Laos-China Railway Project. The temperature is really high during the daytime, so we can only start the work from afternoon till the midnight with our Chinese friends."

"It's really amazing to construct the railway, but it is also a kind of rigorous work. I am responsible for the concrete casting. It looks simple, but if there is any negligence and oversight, the whole process of beam-making will be delayed. It may even affect the quality of T-shaped beams."

"A lot of people had no work, like me before. They can only catch some game on the hill or fish in the river for sale. The income can only afford the repairing motorcycle and daily living expenses."

"Wages here are much higher than before. I also used my savings to buy a new cell phone. I don't need to borrow a friend's cell phone to call home anymore. I have been here more than one year. The new house at home is almost ready to be built. I cherish this job very much."

"We live and work with our Chinese friends, and watch Jackie Chan's Films. We also have a special window for Lao cuisine at the project, and take shower with hot water everyday. I learned from my Chinese friends that the China Railway No.2 Group has built many high-speed railway and high buildings in China, very beautiful. After the opening of this railway, I hope to take my family to China for a visit," Baly said.

Many Lao people are like Baly, with dreams and hopes. They are connected with the Chinese constructor in Laos-China Railway. This railway bears the friendship, and the hope of the Lao and Chinese people.

The China-Laos railway, with a length of over 414 km, links Mohan-Boten border gate in northern Laos and capital Vientiane. Operating speed on the route is designed at 160 km per hour.

As the first overseas route connecting with the railway system in China using Chinese technology and equipment, China-Laos railway is a major strategic project which was reached and promoted by top leaders of the two countries, a major project in infrastructure inter-connectivity between China and neighboring countries, and a major project in implementing the Belt and Road Initiative.

Ground-breaking ceremony of the railway was held in December 2015, and the construction of the whole route officially started a year later.