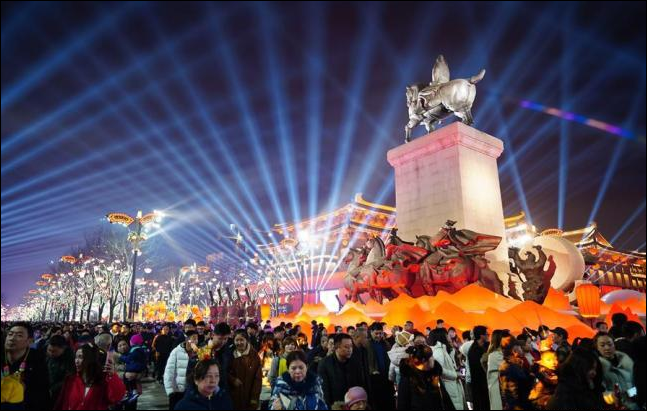 Tourists are seen at the Qujiang New District in Xi'an, capital of Shaanxi Province, on February 5, 2019. (File photo: Xinhua)

A recent study identified the world's most dynamic cities - those with the most socioeconomic and real estate market change - and Chinese cities claimed nine of the top 20 positions.

The fact that 19 out of the 20 most dynamic cities were from Asia is a solid proof that fast urban growth has shifted from the West to the East, as the continent continues its rapid urbanization and economic growth, according to JLL, the US-based real estate investment company that carried out the study.

The City Momentum Index evaluated 131 major developed and emerging markets over a three-year period and identified the 20 most dynamic cities.

Xi'an was ranked ninth on the list. Guangzhou, Nanjing, Beijing, Shanghai, Chongqing, Hangzhou, Shenzhen and Chengdu were also in the list.

"Chinese cities are evolving on a truly global scale, where momentum is more dependent on levels of innovation, entrepreneurship and livability. They are home to a new breed of energetic tech-savvy firms that are extending their global footprints, facilitated by the Belt and Road Initiative," said Jeremy Kelly, director of global research at JLL.

Located in a strategic position on the Silk Road economic belt, Xi'an emerged in the top spot nationally for the first time for "playing an important role in connecting the Asia-Pacific economic circle and European economic circle," according to JLL.

Xi'an has recently released its masterplan to build a pilot zone under the guidelines of the Belt and Road Initiative. The city aims to build an innovation center to serve the BRI, to encourage over 260 companies among Fortune 500 to set up branches and to attract over 200 billion yuan ($29 billion) of foreign investment by 2020.

"The pilot zone will vitalize the market in the western region and make it more open to the outside world," said Song Qinghui, an independent economist.

Two cities located in the Greater Bay Area were in the top 20. Guangzhou has been regaining momentum in high-tech, service industries and advanced manufacturing after losing some ground in recent years to its neighbor, Shenzhen, according to JLL.

"China has undertaken the biggest transformation to high-quality urbanization in the world," said Sean Chiao, president of AECOM Asia-Pacific, a Fortune 500 city-planning firm. "The potential for urban development and infrastructure is huge as a developing country."

"It's clear that the technology and innovation sector is a key driver of both real estate and economic momentum-driven by large technology firms as well as dynamic startups in cities such as Bengaluru, Hyderabad, Ho Chi Minh City and Shenzhen," Kelly added.