Audience treated to a trip on Silk Road in drama 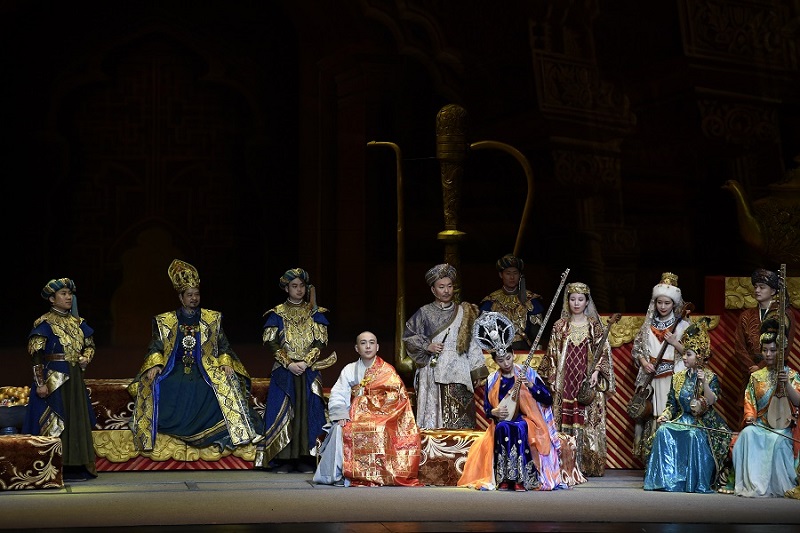 Artists perform during the "A Chinese Concert in Drama -- Xuanzang's Pilgrimage" at the Kennedy Center in Washington D.C., the United States, Jan 25, 2019. (Photo: Xinhua)

The drama tells the story of the Buddhist monk Xuanzang (602-664), who traveled the length of the Silk Road across China on a pilgrimage to India.

The story is brought to life by the 80-piece traditional Chinese orchestra, 24 performers and elaborate costumes.

The format "blurs boundaries and connects acting with playing musical instruments, telling the story of Xuanzang’s pilgrimage to Tianzhu (ancient India) and showing Chinese national music from past to present," said Jiang Ying, composer, writer and director of the show.

Xuanzang’s 17-year journey was driven by his desire to discover religious texts that had not yet arrived from India to China. His journey is recorded in detail in the classic Chinese text Great Tang Records on the Western Regions.

Many of the drama’s details are carefully studied and restored, Jiang said.

"I have encountered many difficulties along the way, because it is a kind of identity that is completely explored. But when the dream calls you in a distant place, just like master Xuanzang, I also insist on pursuing my dream in the distance. The whole process is full of positive energy," Jiang said.

The production showcases the diverse yet connected cultures found along the legendary Silk Road, combining music from China’s Han, Uygur, Kazak, Tajik and other ethnic groups, and featuring exotic instruments such as the zither, or Chinese harp (guzheng), dulcimer and eagle flute.

"The China National Traditional Orchestra has the responsibility and the mission to implement the Belt and Road Initiative, spread the Silk Road culture," said Xi Qiang, CNTO producer and executive director.

"Good art is cross-cultural. The show integrates organically instrumental music performing with culture in the plot, showcasing the diversity, inclusiveness, history and rich display of Chinese traditional instruments, which can resonate with Chinese and Western audiences," Jiang said.

"The performance is so amazing," said Jim Lee, a Washington resident who has been to China several times, including Beijing, Shanghai, Xi’an, Tibet and elsewhere with his family.

Xuanzang’s Pilgrimage is part of Image China, a high-level cultural exchange program presented by China Arts and Entertainment Group that introduces traditional and contemporary Chinese performing arts to global audiences. It is the third year for the Image China series at Kennedy Center.

The CNTO was founded in Beijing in 1960 and has received wide acclaim for its innovative presentations. The orchestra highlights traditional Chinese musical themes while incorporating modern technology.