SYDNEY, Oct. 24 (Xinhua) -- Premier of the Australian State of Victoria Daniel Andrews has urged Australia's leaders to deepen cooperation with China-proposed Belt and Road Initiative (BRI) and has signed a fresh deal expanding his own state's involvement in the global infrastructure project. 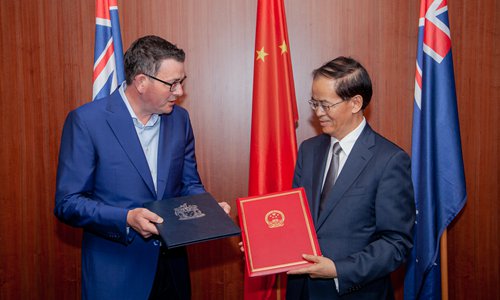 Chinese Ambassador to Australia Cheng Jingye (right) and Premier of Victoria Daniel Andrews attend a ceremony to mark the Australian state of Victoria's signing of a memorandum of understanding with China's economic planning authority on the Belt and Road Initiative. (Website of China's Embassy in Australia)

Andrews signed a framework agreement with China's National Development and Reform Commission, during a diplomatic mission to Beijing, intended to establish a strong two way partnership in the key areas of infrastructure, innovation, ageing, and trade development.

"We need a strong partnership, Victoria has one, and we would hope that every state and territory and indeed the Commonwealth would have a strong partnership and a friendship with China," Andrews told Australian media organization 9News on Wednesday.

In 2018, Victoria became the first Australian state to sign a memorandum of understanding on the BRI, while other states, as well as the federal government, have hesitated to formally engage with the initiative.

"We'd always hope that the federal government would have a similar approach to us, to work closely with China for the benefit of Victorian workers," Andrews said.

"Victoria is proud of its longstanding and valued partnership with China and this new framework agreement helps take it to the next level."