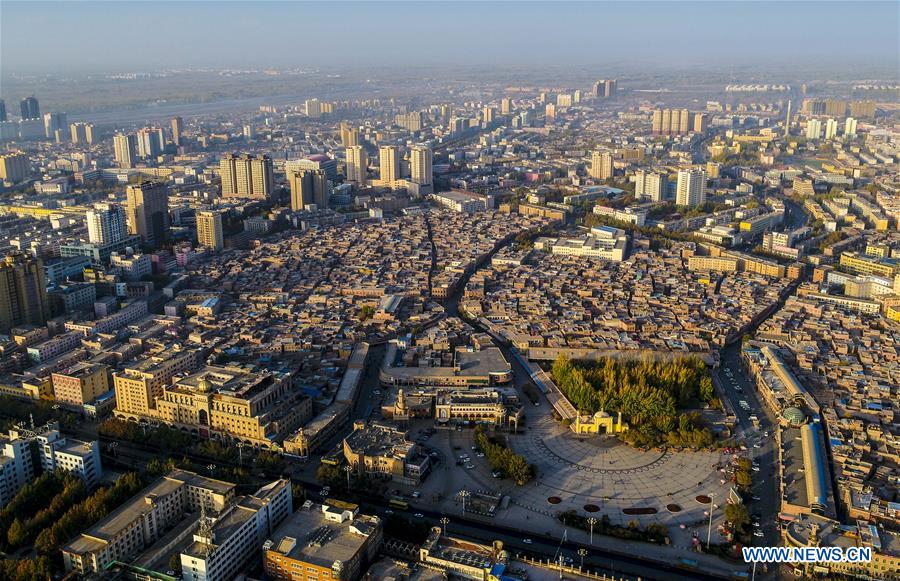 A cursory glance over any guide to Kashgar will undoubtedly inform you that you must get lost in the labyrinthine alleys, check out the loess mound mudstone buildings, and take tea at a 100-year-old teahouse. But if you are looking for a truly authentic experience, put down that book and instead turn to the people who know the city the best -- those that call it home.

Salametgul Khari's homestay is a delicately painted three-storey house with a good-sized yard in Kashgar, northwest China's Xinjiang Uygur Autonomous Region. Today, a dozen tourists are stood in a circle under the shade of a 60-year-old fig tree. Laughter and chatter rise up through the leafy canopy as the group tries its best to learn a traditional Uygur folk dance.

Salametgul's friends and family call her Guli, the Uygur word for flower. In 2017, the 31-year-old was the first person in Kashgar to open a homestay. "Guli's Home" has since made a name for itself as the go-to place for visitors wanting to experience the real Kashgar.

Often called immersive travel, the opportunity to live or work like locals has gained popularity as travelers look for more than a standard package holiday. How do people live? What do they eat? What is a normal day like? Today's traveler is no longer content with being shown something -- they want to live it.

In this far western corner of China, dozens of families have followed Guli's example and numerous homes and workshops are open to out-of-towners. The mood is positive; the local government is happy that tourism is increasing and residents are not only gaining from it, they are playing an active role in its success.

There has been a settlement on the site of Kashgar, a major city in southern Xinjiang, for more than 2,000 years. It is no stranger to visitors either -- as it was an important trading post on the ancient Silk Road that links China, the Middle East and Europe. The city is now inhabited by 34 ethnic groups, with Uygurs accounting for 85.6 percent of its population.

The Old Town area of Kashgar is home to the world's largest earth architectural complex. Since 2010, seven billion yuan (1.02 billion U.S. dollars) has been channeled into a huge renovation project, rendering the buildings earthquake-proof while maintaining their traditional Uygur charm.

Around 220,000 people live in this dynamic part of the city, and they are known for their laid-back attitude and bustling bazaars, which heave with local food, handicrafts, antiques and jewelry. It is a tourist's dream. 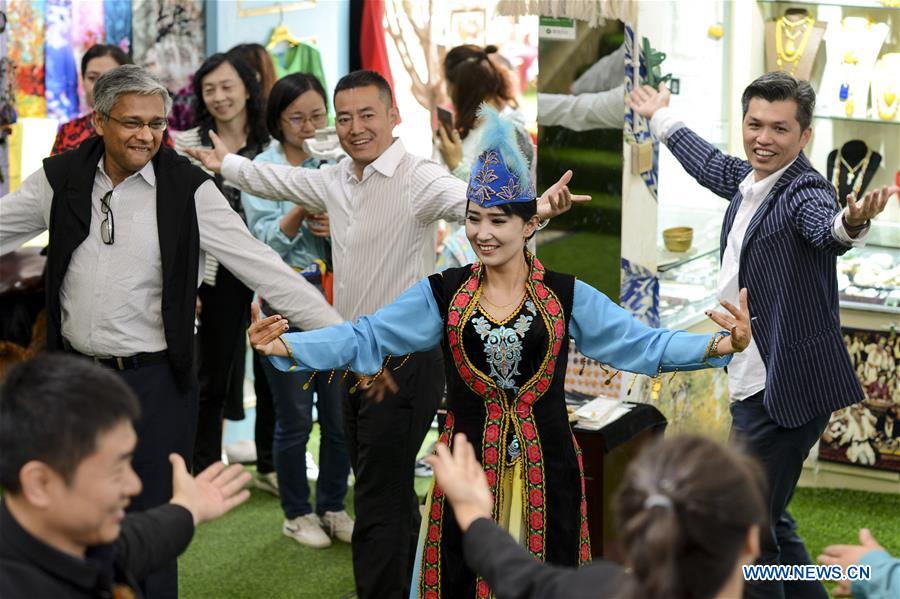 WELCOME! THE DOOR IS OPEN

The Old Town of Kashgar invites you to explore, quite literally as it has no gates.

If you were to take a short walk from the main entrance east, past the shops selling naan bread, copperware and Atlas silk, you will soon come across Guli, who will most likely be encouraging passersby to try on Uygur hats.

Born and raised in Old Town, Guli knows the place like the back of her hand. It is, she says, for this reason that she wants to share her hometown with the rest of the world.

Ten years ago she was a tour guide. When she led tourists around the maze of streets, some were curious about what life was like in those winding alleys. So, she said, she often took them to her own house, and treated them to real Xinjiang hospitality.

"The charm of the Old Town lies in the things we, as locals, take for granted -- the greenery in the yard, a cup of tea in the sun, the patterns of the carpet, or wooden decorations," said Guli.

Then an idea popped into her head: "Why not offer this authentic experience to visitors?"

"We Xinjiang people are very hospitable. When there are guests from afar, we always invite them to our homes and treat them with a big meal," said Guli, "We can also invite tourists to our homes so that they can have a real experience of the life here."

However, starting a business as a woman, while not without precedent, was not going to be an easy task. She didn't turn her plan into reality until she had got married and had kids. When her kids had started kindergarten, and renovation work on Old Town had almost finished, she felt the time was right to make her dream become a reality.

"In the past there was no tap water or plumbing in the houses. Now the standard of living has improved," said Guli.

With the help of her family, the hostess has created a welcoming environment for her visitors. In the yard, Atlas silk and traditional Uygur floral dresses hang on the walls. Her visitors can drink tea at small tables that overflow with walnuts, almonds, dried grapes, red dates and other light snacks.

Guli hires local dancers and a band to perform while the guests enjoy their tea. She also makes it clear that her visitors can join in the fun, too. Guli is an excellent dancer herself and has a wicked sense of humor. When she teaches Uygur dance moves she compares the neck turning and wrist revolving to a polite marriage refusal.

"I have a house. I have money. Please marry me!" Guli bursts into fits of laughter as she explains the male dancers' hand-to-chest movements.

"My father says no. My mother says no. And I also say no," said Guli of the women's movements, elegantly shaking her head.

Another treat for the guests is the home-made Xinjiang food -- pilaf, meat skewers, noodles, and samsa, a meaty bun. When night falls, people feast, sing, and even dance in the street.

"It's as relaxing as visiting a very good friend," said Jin Qianwen, from Zhejiang Province, east China, "I might not have noticed the color of the window frame or the shape of the pillar if I just walked by. But after drinking tea with the hostess I've learned so many interesting things about the house and the culture here."

"Traveling is much more than taking photos. It's about getting to know the life of a place," she added. 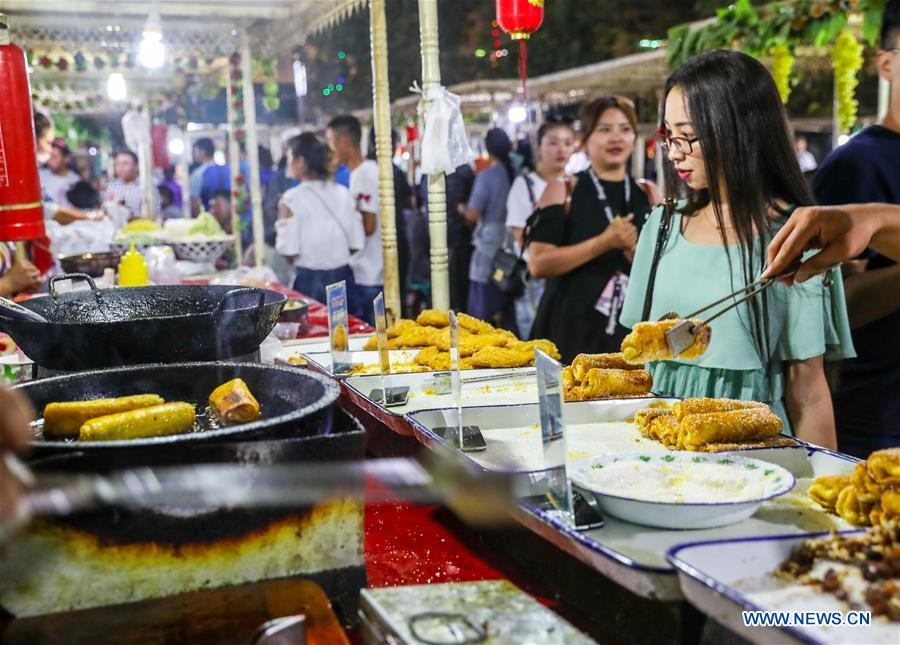 IT'S ONLY JUST BEGUN

Immersive travel isn't just for accommodation pioneers like Guli, who can earn 8,000 yuan (1,167 U.S. dollars) a day in high season. For Tursun Zunun, a renowned potter, immersive travel has brought him students who can pass on the centuries-old craft.

Immensely proud of his rustic pottery, Tursun, 60, is the only person in the family who continues to practice his dying craft. To ensure his ancestral legacy lives on, the master needs an apprentice.

Part of Tursun's workshop is a gallery, which is open to anyone passing by. To his surprise, one day two tourists from the Republic of Korea came to his door, hoping to learn the old craft.

"Traditionally we avoid teaching the family craft to strangers. But I don't mind breaking this rule," said Tursun, "I gave them Uygur names, Yishajan and Yumitijan. They are my apprentices."

More and more workshops have opened their doors to tourists, and people can spend half a day learning how to make a copper bracelet, or a wooden bowl.

"We will keep maintaining Old Town so that our residents can benefit from tourism," said Deng Zhiyong, vice director of Kashgar's tourism bureau.

According to the bureau, in the first half of this year, the city received 1.57 million tourists, up 29.8 percent year on year.

As a key region on the Silk Road Economic Belt, Xinjiang has seen a boom in tourism under the Belt and Road Initiative, proposed by China in 2013.

Last year, Xinjiang received more than 100 million tourists, the highest figure in its history. Consumption in the sector hit 180 billion yuan (28.5 billion U.S. dollars), a 30-percent increase. This is great news for people like Guli.

"The development of tourism in the Old Town means that young people like us now have more opportunities. We can choose different paths from our ancestors. We can create better conditions for our children to grow up," said Guli.

Guli plans to open more bedrooms on the second floor of her homestay as more people turn to home sharing platforms like Airbnb.

"By meeting people from so many places, I've made many friends and broadened my horizons," said Guli, "What's next for the travelers? I'm working on it."