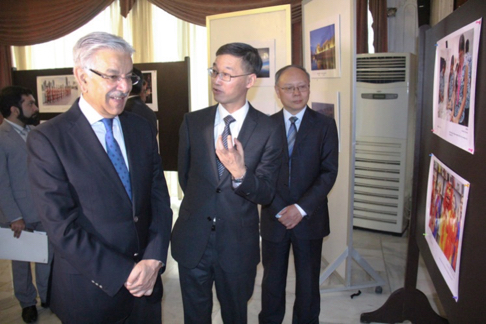 Islamabad (People's Daily) - With China's Belt and Road Initiative, the world is observing a phenomenon which has "few historical precedents or parallels," Pakistani Foreign Minister Khawaja Asif said on Monday.

The Belt and Road Initiative is "an extraordinary venture that is bound to change the landscape of the world," Asif noted, addressing the opening ceremony of a photo exhibition about China's Spring Festival customs jointly held by the Pakistani Foreign Ministry and the Chinese Embassy in Pakistan.

"Through a focus on the connectivity of infrastructure including roads, rail links, sea routes, ports, and connectivity of policy, trade and finance, we are observing a phenomenon which has few historical precedents or parallels," Asif said.

The Initiative is a harbinger of shared dreams, common prosperity and win-win cooperation among the people of the world, Asif said, adding that it signals hope and spirit of South-South cooperation.

Regarding the Initiative as the most transformative one in recent human history, the foreign minister said that Pakistan is privileged to be the site for the flagship project of the Belt and Road Initiative, the China-Pakistan Economic Corridor (CPEC).

"CPEC is making excellent progress and is rapidly transforming the infrastructure and energy landscape of the country," he said, hoping that it will help further strengthen the relationship between the two countries.