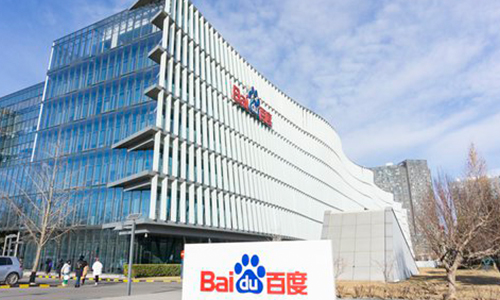 The Hong Kong stock market tumbled temporarily in 2019 when the city was immersed in months of unrest, but experts said that the negative impact would be very small as a trend is developing with more Chinese mainland-based, overseas-listed companies seeking secondary listings on the city's market.
Chinese tech giant Baidu Inc will hold a secondary listing on the Hong Kong Exchanges and Clearing (HKEX) and Baidu has conducted an internal evaluation about the listing, media reports said on Monday.
The company has hired people in Hong Kong to be in charge of connecting with local institutions and contacted some large-scale institutions in the city, news site finance.sina.com.cn said.
Baidu said it had no comment on the matter when reached by the Global Times on Monday. The company went public on NASDAQ in August 2005.
Media reports said earlier that the HKEX is in talks with two more mainland-based tech giants, Ctrip and NetEase, about possible secondary listings.
Baidu had been planning a listing on the Hong Kong bourse for a while and its progress may be faster than other companies like Ctrip, finance.sina.com.cn said, citing people close to the matter.
Many mainland companies adopted a wait-and-see attitude when Alibaba got a secondary listing in Hong Kong in November 2019, and they were encouraged to see that the listing advanced smoothly, Wu Hao, a Shenzhen-based industry analyst, told the Global Times on Monday.
A Shanghai-based private fund employee who is also a veteran Hong Kong stock market observer said that "if those companies are just listed overseas, it would be hard for domestic institutional investors such as bank wealth management funds or insurance capital to get access to them except via very limited investment channels like the Qualified Domestic Institutional" investor program.
"When they are listed in Hong Kong instead, capital flows will be much easier with the existing stock link mechanisms between the mainland and Hong Kong," the observer - who asked to remain anonymous - told the Global Times on Monday.
He also noted that compared with the A-share market, the IPO threshold in Hong Kong is lower, such as acceptance of dual-class shares on the HKEX, which is also a point of attraction to overseas-listed mainland companies.
The Hong Kong market will facilitate mainland companies getting closer to the domestic consumer market and help them enhance their brand influence, Wu said, noting that the Hong Kong market will also benefit from increased capital inflows.
Industry insiders forecast that 2020 would see more US-listed Chinese companies moving to list in Hong Kong, which will help the market remain among the top three in terms of IPO proceeds in the world.
Hong Kong was the world's No.1 IPO market in 2019 as it raised HK$315.5 billion ($40.6 billion) in total funds, an increase of 10 percent from the previous year. The exchange attracted 184 new listings last year, according to recent statistics provided by PricewaterhouseCoopers.
"For companies, they choose the Hong Kong stock market for its distinctive advantages such as its close connection with mainland markets and higher-level supervision and legal system. Those advantages won't be easily eliminated just because of external social fluctuations," the Shanghai-based expert said.
The HKEX revised its listing regulations in 2018 to allow mainland companies to get listed in Hong Kong in the form of a secondary listing, but they must first be listed on a top global market - NYSE, NASDAQ or London Stock Exchange - and have a market value of not less than HK$400 billion, or at least HK$10 billion with revenue of at least HK$1 billion in the most recent year.
Among 200 mainland companies listed in the US market, about 30 can meet these standards, according to an article posted on industry WeChat official account IPOzaozhidao.
Ctrip and NetEase did not offer any comment as of press time.