Islamabad (People's Daily)-Pakistan-China economic and strategic partnership took another step forward when H.E. Mamnoon Hussain, the President of Pakistan, kindly graced the Opening Ceremony of the first branch of Bank of China (BOC) in Pakistan at Aiwan-e-Sadar (President House) in Islamabad on November 7.

In his speech, the president stated that all sections of the society in Pakistan are going to benefit from the all-weather strategic cooperative partnership of Pakistan and China under the China-Pakistan Economic Corridor (CPEC). The President hoped that BOC will play its due role in the economic development of Pakistan and its entry in Pakistan will further strengthen the bilateral relationship between China and Pakistan.

Chen Siqing, Chairman of BOC, along with a delegation of six members, had come from Beijing to attend the opening ceremony. Chen expressed profound regards to the President of Pakistan for graciously hosting the opening ceremony, which reflected Pakistan's deep commitment to continuously cementing the partnership and friendship between the two countries. Chen also thanked the Government of Pakistan and the State Bank of Pakistan (SBP) for extending their cooperation. During the ceremony, Mr. Chen said that with the deepening construction of the Belt and Road Initiative and the CPEC, our cooperation will surely reach new heights.

Zhao Lijian, the acting Ambassador of Chinese Embassy to Pakistan, also attended the ceremony. On behalf of the Government of China, Zhao said that building ever stronger relations in all walks of life between the deepening and widening of economic partnership of the two countries was in line with the aspirations of our peoples of both countries. The Ambassador said he believed that the opening of the Karachi Branch of Bank of China, one of the largest banks in the world will surely bring more opportunities for both Chinese and Pakistani people. 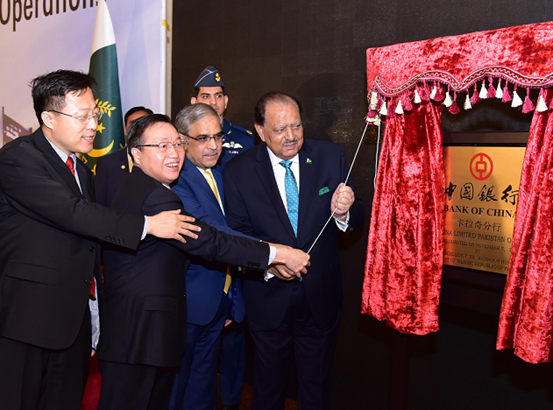 The plaque is unveiled at the opening ceremony. (Photo provided by Karachi Branch of BOC)

On May 11, 2017, the BoC was issued a banking license from the SBP. Four months later, it was allowed commencement of banking business by the SBP. The Bank aims to provide information consulting, customer matching, business promoting, financial support, risk prevention and other financial services. The Bank also focuses on facilitating Chinese enterprises to invest in Pakistan, helping the implementation of projects in CPEC, and supporting the economic development of Pakistan.