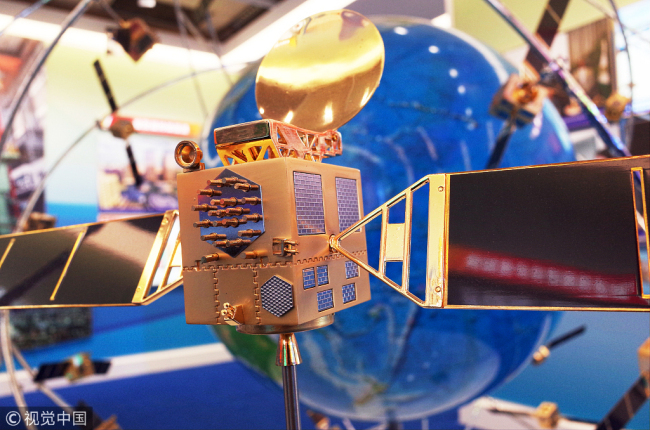 A model of the Beidou satellite navigation system on display during an exhibition in Beijing, September 26, 2017. (File photo: VCG)

With steady progress in the accuracy of location detection, Beidou is being increasingly used in Pakistan. China and Russia have also signed a deal on the compatibility and interoperability of Beidou and the latter’s GLONASS systems, which enables users of either of the systems to use the other without much extra cost.

Such progress dovetails with China’s plan to build a Beidou navigation system with a constellation of 35 satellites by 2020. In comparison, the United States’ GPS consists of 24 satellites.

Economic ties between China and other SCO members lay a foundation for cooperation on satellite navigation services, Miao said.

But more efforts are needed to experiment with creative applications in the domestic market, said Sun Jiadong, an academician at the Chinese Academy of Sciences and former chief designer of the Beidou navigation system.

“Domestic trials are checking for possible applications in foreign countries. The globalization boom for Beidou will come around 2021, but we need to start as soon as possible,” Sun said.

Since 2000, when the first Beidou satellite was placed in space, 33 satellites have been launched for the network. The system began providing positioning, navigation, timing and message services to civilian users in China and parts of the Asia-Pacific region in December 2012.

By the end of this year, more third-generation Beidou satellites will have been placed into orbit and they will work with the earlier generations to cover all economies involved in the Belt and Road Initiative, according to the China Satellite Navigation Office.

By now, Beidou has covered nearly 30 countries and regions involved in the initiative, including Pakistan, Egypt and Indonesia. The satellite system has also been recognized by the International Maritime Organization and the International Satellite System for Search and Rescue, increasing its appeal in the global arena.

Such a wider coverage is already enabling popular applications. For instance, Beidou is being used in Pakistan to assist city planning and traffic management. China and Russia have also set up a joint platform to monitor satellite navigations after the two countries signed a cooperation deal in October 2017.