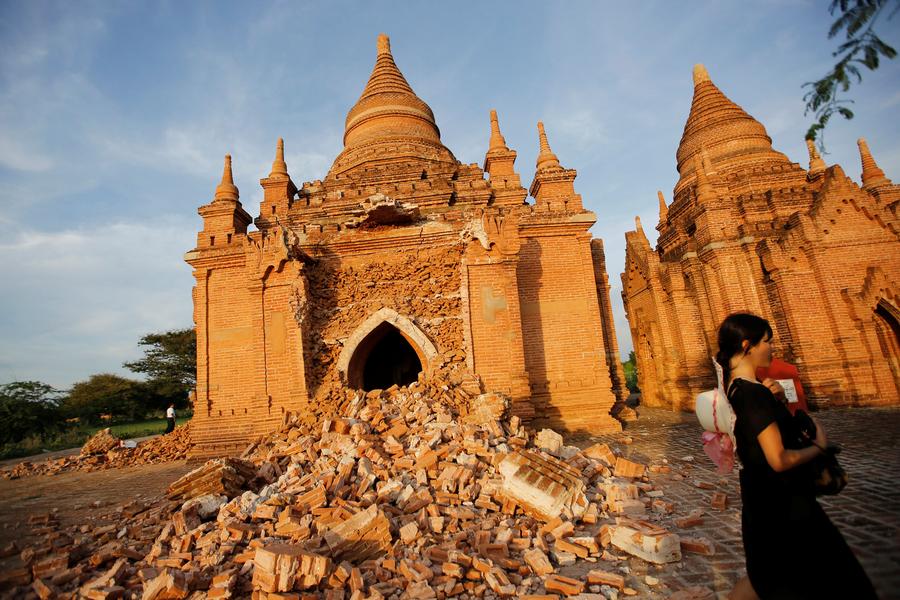 A woman walks past a damaged pagoda after an earthquake in Bagan, Myanmar, Aug 25, 2016. [Photo/Agencies]

China will bolster cross-border cooperation in preservation of historical sites and joint archaeology in 2018 in coordination with the Belt and Road Initiative.

According to Xie Bing, head of the executive office of the State Administration of Cultural Heritage, China is expected to begin restoration of temples in Bagan, Myanmar, in the coming year. The temples, listed as a UNESCO World Heritage site, were damaged in a 2016 earthquake.

The plan is based on a memorandum of understanding reached by leaders of the two countries in May during the Belt and Road Forum for International Cooperation in Beijing.

In Cambodia, the China-led restoration of Ta Keo Temple at Angkor Wat will be finished next year, Xie said at a Friday news conference in Beijing. The restoration, which began in 2010, has been one of China's biggest cultural heritage foreign aid programs.

Plans call for joint archaeology projects next year in countries including Saudi Arabia, Iran, Bangladesh and Kazakhstan. A Sino-Saudi cooperative excavation of an ancient port's ruins near Mecca is expected to unveil its role on the Maritime Silk Road. China also is hoping to help protect sites in Pakistan and Sri Lanka in 2018, he said.

Under the initiative, Xie said, "we are making efforts to enhance our common cultural gene of mutual understanding and trust. That is to build up a community of a shared future of mankind".

In 2017, China had 23 cross-border cooperative projects in 16 nations for conservation of historical sites or archaeology.

In Kathmandu, Nepal, the Chinese Academy of Cultural Heritage began to lead restoration of the nine-story Basantapur Tower at Durbar Square in August. The area, built in the 17th and 18th century and once an important tourist destination, was destroyed by an earthquake in 2015.

"The aid was not only for restoration of architecture, but also focused on reviving the livelihood of the local community," said Lu Qiong, an expert with the State Administration of Cultural Heritage. "It is also a shared concern of our overseas counterparts."

Early this year, the administration said China would create facilities to serve as a safe haven for temporary custody of endangered relics in conflict zones. Xie said the new institution, at the National Museum of China, will begin operating soon.