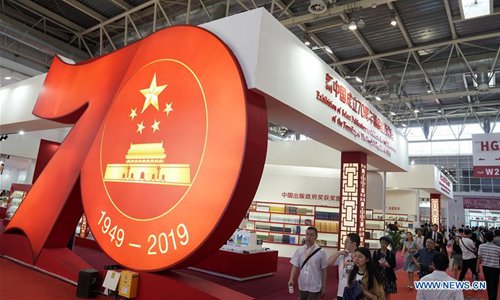 The 26th Beijing International Book Fair opened Wednesday with a focus on the 70th anniversary of the founding of the People's Republic of China (PRC).
More than 2,600 exhibitors are taking part, displaying over 300,000 books. Some 1,600 overseas exhibitors from 95 countries and regions, including 30 countries along the Belt and Road, are present.
Portugal and Kazakhstan are participating in the book fair for the first time, and Romania is the guest of honor this year.
Several exhibits are dedicated to the 70th anniversary of the PRC, with selected books and periodicals showcasing the achievements since the founding of the PRC.
Huang Kunming, a member of the Political Bureau of the Communist Party of China (CPC) Central Committee and head of the Publicity Department of the CPC Central Committee, visited the book fair and called for more fine publications to promote Chinese culture and show the progress of the times.   He urged high-quality development of the publishing industry and demanded the industry to put social benefits first while pursuing economic returns.
The publishing industry should take advantage of the international book fair to carry out extensive overseas cooperation and exchanges to present a true, multi-dimensional and panoramic view of China, he said.
The book fair, started in 1986, has become the country's key international book fair and copyright trading platform.