BRI NEWS Belt and Road: All for one or one for all?

Belt and Road: All for one or one for all? 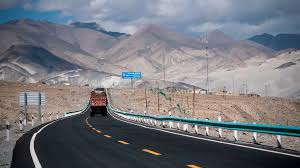 Connecting the world: it is not a new idea, but this time it is bigger and faster.

That is China's Belt and Road Initiative. Some might say it is just a pie in the sky, but is it?

Well, like the roads behind me, it is a network, a big network. But when it comes alive, it will change the world in a big way.

The connectivity initiative was born in 2013. It aims to join Asia, Europe and Africa through roads and ports, by trade and investment, and through innovation and technology.

It has China on its cover, but it is not necessarily a Chinese pet project. For example, even though the World Bank was created by the US and UK in the 1940s, it was a bank of the world. The Belt and Road was inspired by China, but it has become an aspiration beyond China.

Sounds like a good idea? That's because it is. And that is why it has caught up so soon and spread around so quickly. Trade among the Belt and Road countries accounts for one-third of the world's total.

In a span of 6 years, from Astana to Amsterdam, from Bangkok to Berlin, and from Shanghai to Sharm el Sheikh, the continent has come alive.

But it developed so fast, not only was the world not ready, China itself was caught off guard as well. The projects are so overwhelming and complicated that they are destined to be difficult. That is why we see challenges in Hungary, Malaysia and Sri Lanka.

Like any idea, it ran into problems, but so what? Instead of being so crestfallen at the very beginning, we should embrace hardship every step of the way.

But the biggest challenge is not the connecting of roads, ports and bridges, and not even that of banks and factories, but the linking of minds. Humans do ambitious things, not because we are stupid, but because we are smart.

The best mantra for working intelligently in our age is "We can work as one." Going at it alone is not the answer, but band together, and we can walk far.

The Belt and Road Initiative is a like a gigantic project with a million moving parts on a continental scale. Sometimes it speeds ahead, sometimes it grinds on.

But one thing is for sure: it happens on land, at sea, in the air and above the sky, in cyberspace and outer space. The spine of Asia and the world is refined and revived as we speak.

The Belt and Road -- it is not a pie in the sky. The sky isn't even the limit.

(Editor's note: Zou Yue joined CCTV in 2003, and became in 2010 the anchor of China 24, a flagship news magazine show on CCTV NEWS, the predecessor of CGTN. Since 1997, Zou has covered major events across China, including Hong Kong and Macao's return to China, China's first manned space flight, the six-party talks in Beijing, the Wenchuan Earthquake, and Shenzhou and Chang'e Space Missions to name a few).