In recent years, China-Kyrgyzstan cooperation under the framework of the Belt and Road Initiative (BRI) has yielded fruitful outcomes. 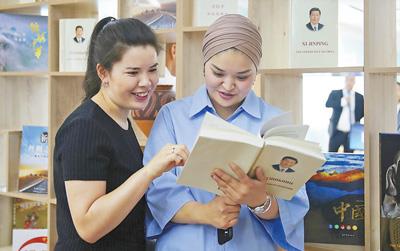 The road network rehabilitation project in Bishkek is an example of infrastructure cooperation between the two countries. The project, contracted by China Road and Bridge Corporation (CRBC), aims to improve the road network of the Kyrgyz capital.

Many roads in the city are in need of repair as they are bumpy and narrow. Currently, Chinese and Kyrgyz builders are reconstructing the Repin Street, in the west of Bishkek.

To improve road conditions in Bishkek and deliver the benefits of China-Kyrgyzstan cooperation to local people is a common concern of Chinese President Xi Jinping and Kyrgyz leaders.

The Bishkek road network reconstruction project started in October 2016, covering 49 streets and 10 bridges with a total length of 95.4 kilometers. To date, 47 roads has been constructed and restored. The wide and flat roads have given the city a facelift.

El Moke is an engineer of the project graduating from Harbin Engineering University in northeast China. He has participated in the construction of 7 roads under the project.

The project is the largest road network renovation project in Kyrgyzstan, he introduced. Thanks to the project, a car trip from the suburb to downtown Bishkek takes only 20 minutes, compared with 40 minutes in the past.

Kyrgyzstan is rich in water resources, but due to a lack of capital and technology, only 500 of the more than 1,800 villages in the country had the access to centralized water supply.

In addition, the vast rural areas and city outskirts did not have conditions for centralized water supply, and the concentrations of heavy metals and microorganisms were excessive, posing severe challenges to rural water safety.

Chen Xi, deputy director of Xinjiang Institute of Ecology and Geography under the CAS and director of RCEECA, said the center has helped to conduct Kyrgyzstan’s first systematic study on drinking water safety in nearly 30 years after the country’s independence, striving to develop the best and most suitable implementation plan for water purification technologies.

“Now we have clean and safe water to drink. I think it tastes better than mineral water,” said a female resident from a village 10 kilometers from Bishkek, giving a thumb up to the project while fetching water from a tap. “With the technologies, we don’t have to worry about having no safe drinking water,” she added.

“My fellow villagers are happier as we now have a convenient access to clean water,” said the head of the village. Besides fetching water every day, the man likes to visit the demonstration site when he’s free.

“The equipment is a treasure of our village. Though it doesn’t need to be supervised because it is self-cleaning and has a self-contained sewage system, I still like to come and see it,” the man said.

Thanks to the Datka-Kemin power transmission and transformation project jointly undertaken by China and Kyrgyzstan, the central Asian country has established an independent power grid system, met the electricity consumption demand of residents in its northern part, and acquired the capability to export electricity to neighboring countries.

Kyrgyzstan was one of the first countries to support and participate in BRI. Kyrgyz President Sooronbay Jeenbekov and Chinese President Xi Jinping agreed to strengthen the alignment of the BRI with Kyrgyzstan’s 2040 National Sustainable Development Strategy when they met in Beijing this April.

From the Datka-Kemin power transmission and transformation project, to the China-Kyrgyzstan-Uzbekistan highway, and the RCEECA, China-Kyrgyzstan cooperation on Belt and Road has not only benefited the local people, but also the other countries in the region.

“The improvement of infrastructure has enabled us to better achieve connectivity with neighboring countries, improved the efficiency of personnel exchanges, accelerated the circulation of goods, and allowed our country to take a greater part in Belt and Road construction and gain more from it,” said a coordinator of the Bishkek road reconstruction project.