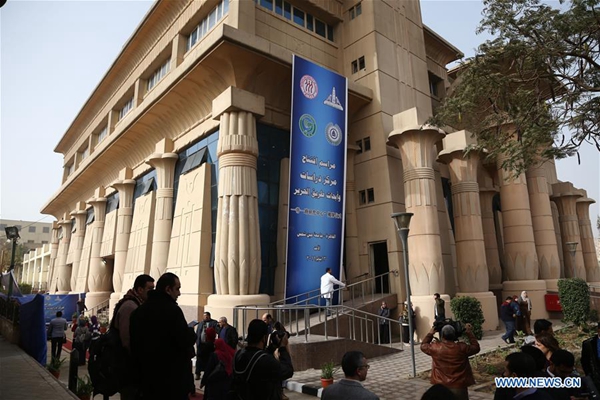 This photo taken on Jan. 13, 2019 shows the exterior of the Belt and Road Cooperation Research Center in Cairo, Egypt. (Photo: Xinhua)

During the opening ceremony, President of Ain Shams University Abdel Wahab Ezzat said that establishing the center came after one-year negotiations, which resulted in a Memorandum of Understanding that his university signed with Liu Wei, president of the Renmin University.

"This is the second center of its kind after a similar one was established in Russia," he said, adding that the center aims at conducting economic, commercial and technical studies for projects and cooperation between Egypt and China.

For his part, Liu lauded the establishment of the center in cooperation with Ain Shams University.

"Egypt and China are countries with ancient civilizations...We were connected in the past by the maritime Silk Road which reached Alexandria," he said, referring to the northern Egyptian port city.

Liu added that the new center is a cornerstone for increased cooperation between the two countries, mainly in the field of economy.

"Ain Shams is one of the great universities which started its relations with China through establishing Chinese Language Department. It is considered one of the largest and oldest Chinese language departments in the world," he said.

Liu noted that thousands of Egyptians have graduated from the department and played key roles in promoting cultural exchanges between Egypt and China.

"Renmin University ... has valuable researchers," he said, adding that the two universities signed an agreement in 2018 which represented the starting point of mutual cooperation.

"I hope this center will be a bridge linking Egypt and China for increasing cultural and economic ties," Liu said.

Chinese Ambassador to Egypt Song Aiguo said the Belt and Road Initiative (BRI) is a huge project that calls for large-scale cooperation in vast regions across the world.

"It is important for China and other countries to make great efforts to make this happen," he spoke at the inauguration ceremony. "We should enjoy the benefits of the BRI."

Proposed by China in 2013, the BRI refers to the Silk Road Economic Belt and the 21st Century Maritime Silk Road, which aims to build a trade and infrastructure network connecting Asia with Europe, Africa and beyond along the ancient trade routes of the Silk Road.

The ambassador said that when the initiative was proposed, it received positive response from a large number of countries in Asia, Africa and Europe.

"Egypt is a very close friend of China. Today we can conduct better cooperation for the future of our countries," Song said.

He added that as Egypt is working hard to raise living standard of its people and improve its economy, Egypt and China face great opportunities to boost cooperation in this regard.

"If we want to do a good job, we should first make a good academic study of cooperation...That's why the inauguration of the center is of great importance," the ambassador said.

"I wish that we will benefit a lot from the ideas of this center," he added.

After upgrading the relations between China and Egypt to a comprehensive strategic partnership in 2014, cultural exchanges have been growing between the two sides.