As the Belt and Road Initiative continues to bring tangible benefits to the countries involved, more students from the Belt and Road route countries are choosing to study in China, and more of them are starting to learn advanced technology in addition to language and culture in Chinese universities. 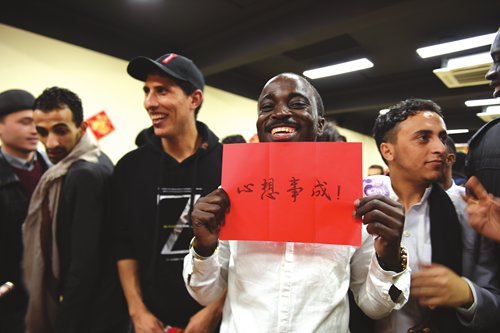 "In Zambia, many students would like to study medicine, but there are few medical schools and they are very costly, especially the private ones," Lengwe told the Global Times.

Lengwe said he is planning to get his doctor's license in Zambia after graduation. "The main reason I am studying medicine is to help others, which makes me feel life is meaningful," Lengwe told the Global Times.

With China's rapid development in recent years, more and more people are beginning to understand Chinese culture and more countries, especially those along the Belt and Road route, are starting to recognize China's technological and scientific achievements. These are the reasons why many students from countries along the Belt and Road route choose to study in the country, experts said.

Muhammad Sohail Khan is planning to do his doctoral studies in China this year after studying clinical medicine in Xi'an Jiaotong University for almost 10 years.

"I like China's safe environment and convenient facilities," Khan said.

Khan did his undergraduate studies at the university from 2010 to 2014. After a year of medical practice back in Pakistan, Khan applied for Xi'an Jiaotong University for postgraduate studies without hesitation.

As the starting point of the ancient Silk Road, Xi'an is playing a pivotal role in linking countries along the Belt and Road in terms of higher education.

In 2015, Xi'an Jiaotong University, the top university in Shaanxi Province, initiated the University Alliance of the Silk Road (UASR) to train international talent and work as a platform for educational cooperation. So far, the alliance has incorporated 151 universities from 38 countries, according to the School of International Education of Xi'an Jiaotong Unviersity.

Under the framework of the alliance, the university aims to train talents according to the practical requirements of Belt and Road construction. In 2018, Xi'an Jiaotong University had a total of 2,804 international students from 136 countries and regions, and 70 percent of them are from countries along the Belt and Road route.

Sofia Zachepylo, 19, from Ukraine, studies at the School of Economics and Finance of Xi'an Jiaotong University. She speaks fluent Chinese.

"China is undergoing rapid development, and I assume it will soon become the most powerful country economically. Therefore, I'd like to learn economics and trade in China," said Zachepylo. 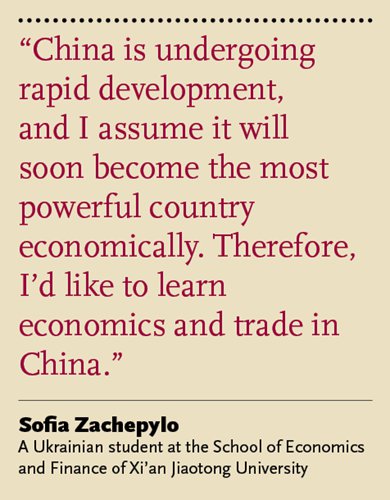 According to data from the Ministry of Education, there were 500,000 international students in China in 2017. And the number of students majoring in engineering, science and technology and agriculture increased by 20 percent compared to 2016, chinanews.com reported. (Photo: Global Times)

Instead of simply choosing language studies, more international students are choosing to study science and engineering or other practical majors in China. And Chinese universities, especially those located in important points of the Belt and Road route, have launched cooperative programs on talent training to help with local development.

Lanzhou University in Lanzhou, Northwest China's Gansu Province, is an example. Being located on an important part of the Silk Road gives it a special advantage for international cooperation under the Belt and Road Initiative.

Chi Gang, director of the Office of International Cooperation and Exchange of Lanzhou University, told the Global Times that the university has helped to train students from Pakistan, Afghanistan, and some African countries in areas where the university has advantages, including ecological study, biological science and grassland farming.

"Dozens of doctoral students from Pakistan in bioscience and ecological study have graduated from our university. They will make contributions to their own countries after going back. We have also set up cooperation centers with some countries. For example, our agricultural technology base in Kenya helps train local technicians and farmers with plastic film mulching and water saving technologies to solve food shortage problems," Chi noted.

Chang'an University in Shaanxi Province, one of China's top institutes for road and bridge and automobile engineering, has developed a university-industry cooperation model for training international talent, which has boosted international student numbers from 409 in 2013 to 1,600 in 2019. 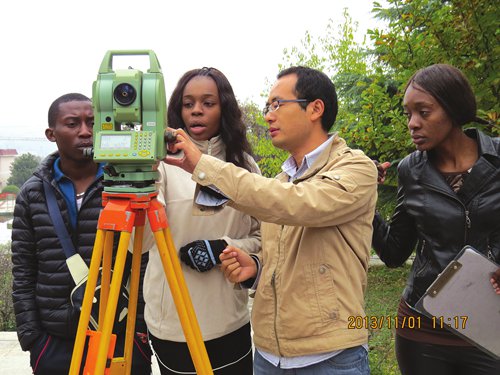 "Cooperation with Shaanxi Automobile Holdings focused on scientific research projects of domestic students. Now the company has set up scholarships in our university to jointly train international students, as the company expands its business scope to some Southeast Asian and African countries such as Laos and Cambodia and Algeria," Lü told the Global Times.

Lü said that at the beginning of 2018, the university and Shaanxi Automobile selected 20 students from these countries for postgraduate studies in the university, and provided them scholarships covering all their tuition fees. Additionally, the company also set up other scholarships for students with outstanding performances.

In addition to road and bridge engineering and automobile engineering, the university also launched majors serving projects involving sectors such as engineering accounting and management. In 2018, a total of 1,000 international students were admitted by the university, and the goal in 2019 is 1,600.

A Belt and Road engineering training center was also established at Chang'an University to provide one or two-year technical training and further education for engineers of foreign countries.

Lü told the Global Times that most of the international students who graduated from Chang'an University have returned to their own countries and are working for various infrastructure projects. Some of them have been employed by Chinese construction companies to work in overseas construction projects in different parts of the world.

The cooperation programs for training talents would also help to develop bilateral ties between China and countries along the Belt and Road route.

Zhang Wengang, director of the School of International Cultural Exchange in Lanzhou University, told the Global Times that the university has enrolled nearly 2,600 international students from 59 countries, with 97 percent of them from the Belt and Road route.

"During their study, the university pays attention to creating an international atmosphere on campus and also helps expand their understanding of China to explain characteristic Chinese culture and policies and show them the true China. These students will become a window for people to know China as well as a bridge for future friendship," Zhang said.

Chi from Lanzhou University said that Pakistani students who graduated from there would offer intellectual support for the construction of the China Pakistan Economic Corridor and would also help cement bilateral ties between the two countries.

Moreover, Zhang said that these international students would also bring China's governing experience to their own countries. "Compared with Western countries, China shares more similarities with developing countries along the Belt and Road route. Therefore, China's experience in dealing with problems may be more helpful."