After a day's work at the Chinese e-commerce giant Alibaba's, Guillermo Ruiz records a Spanish audio lesson for his 60,000 Chinese followers online. A few kilometers away at the airport of Madrid, Chinese tourist Liu Jie receives the tax refund of purchases through a Chinese mobile application. 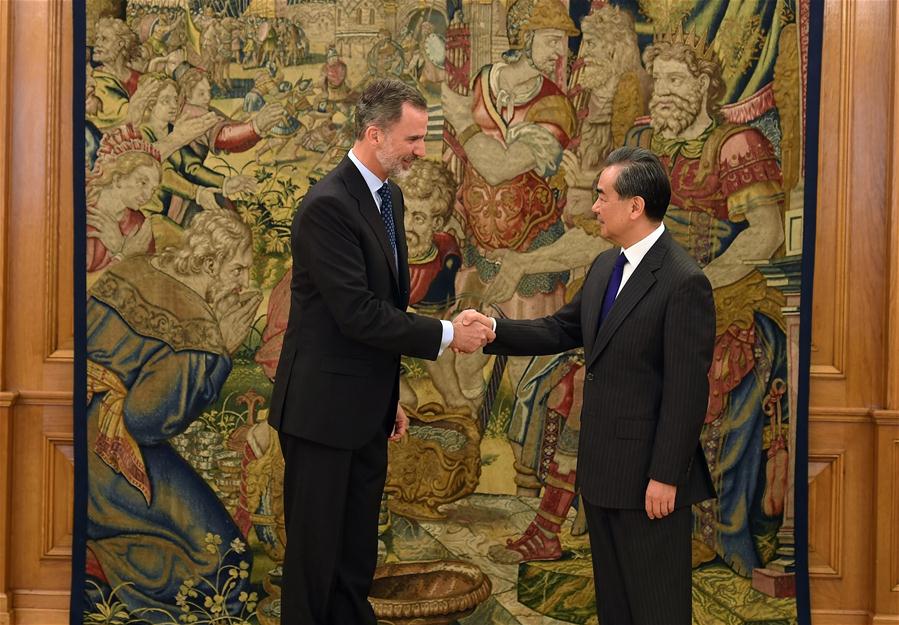 Nothing exceptional. The interconnection between the Spanish and Chinese societies has undoubtedly gone beyond what Diego de Pantoja could imagine four centuries ago -- the Spanish Jesuit had dedicated his life to exchanges between the two cultures through the Silk Road.

Today, that ancient trade route is renewed with the Belt and Road Initiative, which strengthens ties between China and Spain in new areas. Chinese State Councilor and Foreign Minister Wang Yi on May 16 started a 9-day trip for official visits to France, Spain, Portugal and Argentina.

In the Spanish capital Madrid, Wang held talks with King Felipe VI of Spain, Prime Minister Mariano Rajoy and his Spanish counterpart Alfonso Dastis. They discussed issues such as strengthening cooperation within the framework of the Belt and Road Initiative proposed by China in 2013.

Tian Delong, researcher of the Institute of European Studies of the Chinese Academy of Social Sciences, said the two countries have strengthened mutual political trust in recent years and promoted economic, trade and tourism cooperation, as well as cultural exchanges.

"Spain has become an important investment destination for China in Europe," Tian added.

China has become Spain's largest non-EU trading partner. Bilateral trade volume rose from $12 million in 1973 to a record $30.9 billion in 2017.

Tian believed that Wang's visit to Spain will boost cooperation in more areas and through new modes. Spanish Prime Minister Rajoy attended the Belt and Road Forum for International Cooperation held in Beijing in May 2017. He spoke highly of the Initiative, saying it has a significant impact on regional economy and cultural exchanges along its routes by promoting cooperation.

He noted it is important especially for businesses "because this is about building land and maritime infrastructures that help unite the different peoples of the world and improve trade."

In this sense, Spain is among the first beneficiaries. In November 2014, after a 20-hour trip, the first Yixin'ou cargo train arrived in Madrid from Yiwu in East China, passing through Kazakhstan, Russia, Belarus, Poland, Germany and France.

Data from the foundation for Yiwu-Spain exchanges FIYE showed Spanish exports to Yiwu have increased by more than 300 percent thanks to the cargo train service.

Chang Shiru, director of the Foundation of the Confucius Institute of Barcelona, thought that increased cultural exchanges helped consolidate the basis for Spain-China cooperation.

He cited the fact that a large number of the Chinese language learners in Spain choose to take related linguistic exams, adding that "some of them learn Chinese in order to know more about China, but many people especially the young learn it for a better future in their careers." Chinese State Councilor and Foreign Minister Wang Yi gestures during the joint press conference with Spanish Foreign Affairs and Cooperation Minister Alfonso Dastis (not in the picture) after meeting in Madrid, Spain, May 17, 2018.

Alberto Carnero, Spain's ambassador to China, said the Belt and Road Initiative represents a great opportunity for Europe that is concerned about a rise in trade protectionism.

The initiative "has renewed Europe's interest in China, and is seen as an opportunity to have more connectivity, more access to markets in one direction and another, more openness, and also to have a more balanced relationship," the diplomat said.

Chinese researcher Tian also expected competition in some areas between China and Spain since the two are less economically complementary due to similar industrial structures. However, "the Belt and Road Initiative can help turn competition into opportunities for cooperation if they explore new models of collaboration," he said.

Tian suggested they work together to find third-party markets and build in Spain logistics centers and e-commerce platforms.

He believed that their efforts "could provide a good example for other European countries in cooperation with China."