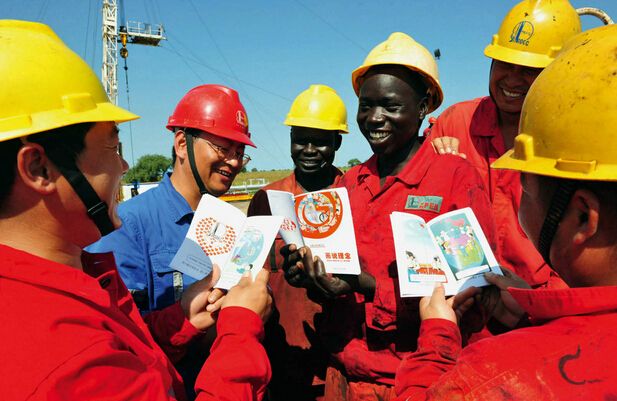 NAIROBI, Sept. 14 (Xinhua) -- China's silk reached Africa through Central and West Asia and Europe along the route of the ancient Silk Road.

Chinese ships arrived at the east coast of Africa through the maritime Silk Road as early as the Tang Dynasty. In the early 1400s, Zheng He led the largest ships in then world to reach as far as East Africa, marking a landmark chapter for China-Africa exchange.

Today, the China-Africa comprehensive cooperation and common development have been lifted to a higher level thanks to the Belt and Road Initiative (BRI) China proposed in 2013. This also offers Africa the opportunity to promote innovation and make their dreams a reality.

China has been supporting Senegal in building transport infrastructure and has provided loans to build a key highway linking two major cities of Thies and Touba, a project being carried out by the China Road and Bridge Corp. (CRBC).

The highway, which is located east of the capital Kigali and is about 113 km long, is the largest cooperation project between China and Senegal and will strongly boost Senegal's infrastructure connectivity and economic growth.

The project brings many tangible benefits to the local economy, for example, all the building materials used were bought from locals, Zhang Jianguo, manager of the Senegalese branch of the CRBC, said, adding that "After completion, the highway will facilitate the transportation of peanuts and fruits from the places nearby."

The project also provides massive job opportunities for local residents. After starting construction in 2016, the CRBC organized technical training and Chinese-language classes for local workers. They also selected qualified local workers and financed their annual sightseeing tour to the headquarters in China.

Laba Thiam is one of their top workers. After joining the CRBC, she started to live on her own instead of relying on her parents, Thiam said.

The CRBC welcomes women staff, and "I hope more Senegalese women to join the CRBC, and to strive for the same position in society as men under their own power," she added.

During the past five years, the BRI has vigorously helped Africa with its integration process by building roads and other infrastructure. "Once you step on the land of Africa, you will see plenty of Chinese company investment projects. They help African nation construct highways, railways, airports and ports," Namibian President Hage Geingob said.

As of last year, China has invested and built highways and railways in Africa exceeding 5,000 km. In addition, China has also trained 160,000 African talents.

In recent years, a series of giant projects in Africa undertaken by Chinese corporations have been completed. These include the Mombasa-Nairobi railway in Kenya, the Addis Ababa-Djibouti railway which connects landlocked Ethiopia to Djibouti and the Benguela railway. These mega projects have been making significant contributions to the connectivity and economic growth in African nations.

PREPARING THE LABOR FORCE FOR NATION-BUILDING

The center, or a polytechnic college based in Musanze, which stands at the foot of the Virunga Volcanoes, also offers short-term training for woodwork, cooking, household-electrical installation and welding, among others.

The vocational education center launched in 2015 under the BRI framework now has some 1,200 students, compared to some 170 when it opened. According to a bilateral agreement signed in June this year on its expansion, the Chinese government will continue to fund the construction of its administration, teaching and dormitory buildings and affiliated facilities, while providing the needed equipment and supplies.

The latest move is expected to remarkably enhance the college's capacity.

"We are helping fill the technical personnel deficit in the country," said Emile Abayisenga, head of the college and Musanze's city council.

Rwanda suffers a skilled-labor shortage, while vocational courses are badly needed, he noted.

The college's 26-year-old student, Marcel Nyirimihigo, designed a concrete gravity dam for the Eastern Province for his graduation project.

"Agriculture is fundamental. For Rwanda, irrigation is a key factor in agricultural modernization," he said. "This is why we designed a dam."

"Now everybody can take good showers in summers," Mauritius pediatrician Marie-Noelle Moutou said. "At last, the reservoir dam is completed, and we can live a better life."

The Bagatelle dam, some 22 km southeast off the Mauritius capital Port Louis, stands near the home of the five-member Moutou family. The dam construction was contracted to the China International Water & Electric Corporation.

Before the dam was completed on June 30 this year, the Moutous had to wake up very early everyday to get tap water. Tap water was only available for several hours in the morning, and their water-buckets were never filled due to low water pressures.

Located in the Indian Ocean, Mauritius lacks fresh water as is the case for many island countries. Official data shows the Bagatelle dam benefits an area some 20 percent of Mauritius, home to over 30 percent of the population. Currently, residents in Port Louis and its neighborhood can enjoy a round-the-clock water supply.

Ex-President of Mauritius Ameenah Gurib-Fakim has said, "Thanks to Chinese friends for building this great dam for us. It will make thousands of our citizens no longer worry about where to obtain clean drinking water."

In the Coromandel industrial park, 5 km away from where the Moutous live, Jean Ah-Lim too feels gratitude towards the dam-builders.

Today, the owner of a factory making the Chinese dumpling jiao-zi no longer has to buy fresh water from privately-run enterprises in order to maintain their daily output of 10,000 dumplings. This dramatically reduces the cost.

"The dam helps the local households and enterprises, and will pull (up) the country's economy," he said.

Mauritius welcomes the Belt and Road and is willing to deepen this win-win friendly cooperation with China, Mauritian Prime Minister Anerood Jugnauth has said. In his opinion, the BRI integrates the visions of many countries.