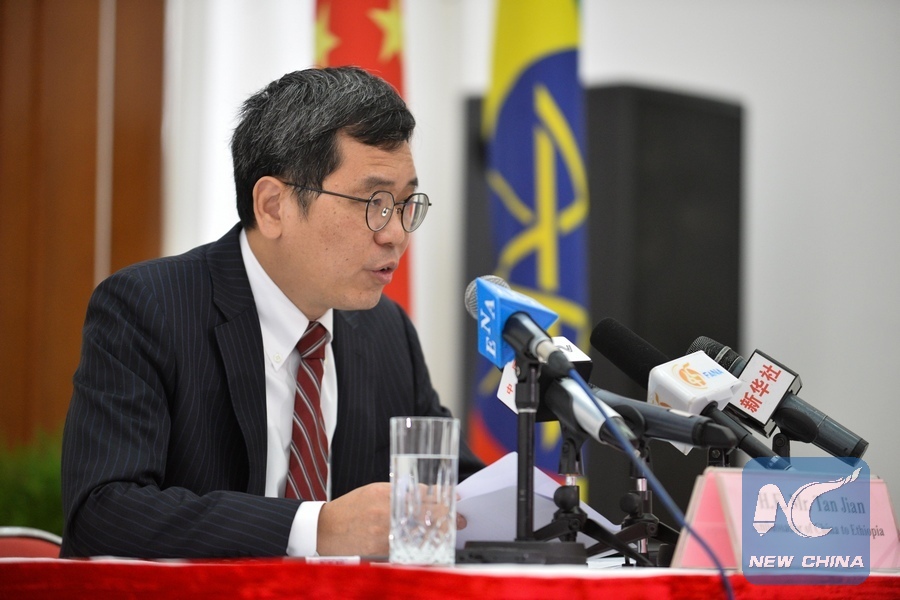 Speaking to the press on the premises of the Chinese Embassy in Ethiopia's capital Addis Ababa, Tan said the upcoming Belt and Road Forum for International Cooperation scheduled to take place by the end of this month in China is another impetus to further partnership forged between the two countries.

The East African country's Prime Minister Abiy Ahmed is among the leaders who will participate in the upcoming BRI forum, whereby China with other forum parties will take stock of what has been achieved and draw a blueprint to further enrich cooperation on the initiative.

Cooperation on Belt and Road Imitative is not a talk shop, but an action-oriented initiative that delivers tangible outcomes, he said, adding that the participating parties attending the forum would build on successful practices and jointly develop multi-tiered cooperation framework with more real results of still higher quality.

The 2nd Belt and Road forum is expected to produce a full range of deliverables, including governmental cooperation agreements and initiatives, as well as concrete cooperation projects involving participation of the business sectors, Tan said.

Reiterating that the Belt and Road Initiative is guided by the principle of consultation and cooperation for shared benefits, the ambassador said the upcoming forum would serve as an important platform to further bilateral relations between the two countries.

"China and Ethiopia are close and friendly brothers and comprehensive strategic cooperative partners. Cooperation on Belt and Road Initiative is the new driving force in China-Ethiopia relations, following the FOCAC (Forum on China-Africa Cooperation) mechanism," he added.

Ethiopia is one of the 124 countries that have signed Belt and Road Initiative cooperation documents with China, the ambassador said, reiterating China's commitment to supporting Ethiopia to play an important role in jointly advancing the initiative in Africa.

"Ethiopia is among the first batch of African countries who signed cooperation documents concerning jointly building the Belt and Road, and China supports Ethiopia in playing a bigger role as a bridge and a link for jointly advancing the BRI in Africa," he said.

The ambassador further stated that the comprehensive strategic partnership forged between China and Ethiopia would continue to be at the forefront of Sino-African relations and serve as a model in the framework of the Belt and Road Initiative cooperation.

Cover image: Tan Jian (R), Chinese Ambassador to Ethiopia hands over a scholarship grant agreement for 220 post graduate students during a Chinese Government Training Program Fellowship Reception at the Sheraton Hotel in Addis Ababa, capital of Ethiopia, Aug. 24, 2018. The Chinese government has provided more than 1,450 scholarship opportunities to Ethiopians in various academic and training areas during the first eight months of 2018, the Chinese Embassy in Ethiopia revealed.