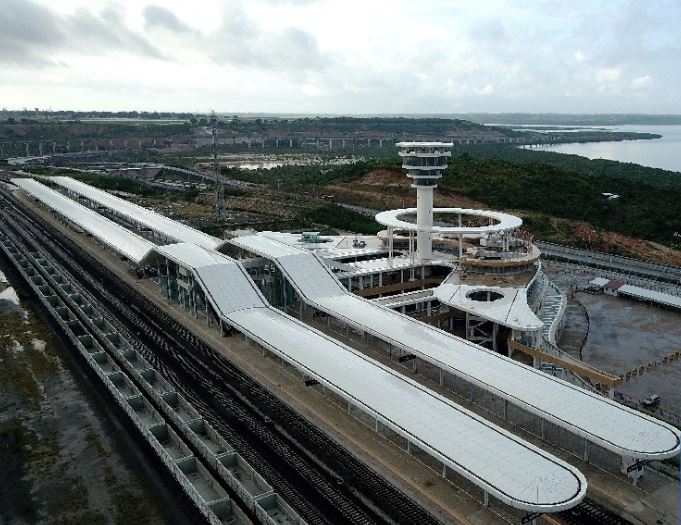 Aerial photo taken on June 2, 2018 shows the Mombasa railway station in Mombasa, Kenya. The China-funded Mombasa-Nairobi Standard Gauge Railway is estimated to have boosted the African country's GDP by 1.5 percent and have provided nearly 50,000 jobs to locals. (Photo: Xinhua/Wang Teng)

UNITED NATIONS, Aug. 30 (Xinhua) -- The Belt and Road Initiative, if well managed, could significantly reduce the costs of doing business for both China and Africa, and strengthen their ties as well, a senior United Nations official said Thursday.

China and Africa have a long history of development cooperation, which has greatly intensified in the past decade, Ahunna Eziakonwa, assistant administrator and director of the Regional Bureau for Africa, United Nations Development Programme (UNDP), told Xinhua.

This phenomenon, which contributes to Africa's growth, is also helping to sustain China's growth momentum, Ahunna said, adding that this partnership, if well managed, could catalyze the achievement of the 2030 Agenda for Sustainable Development.

Quality infrastructure is needed to move toward industrialization, create jobs for the unemployed youth and women, and bridge the development divide between rural and urban areas, she said.

"Africa must use its partnership with China to leverage quality infrastructural development in such areas as roads, railways, water, telecommunications and energy in order to expand regional connectivity and integration," she said.

"To make this a win-win partnership, it must be driven by African countries' national development priorities, the Programme of Infrastructure Development for Africa and Agenda 2063," she said.

The associated projects should be economically viable and sustainable to Africa, she said.

She added that climate change and the conservation of its natural resources, in particular the environment, are also important to Africa.

Focusing Africa's partnership with China and others on these strategic issues will put Africa on a sustainable development pathway, and simultaneously help China meet its huge energy, excess domestic capacity and economic needs, Ahunna said.