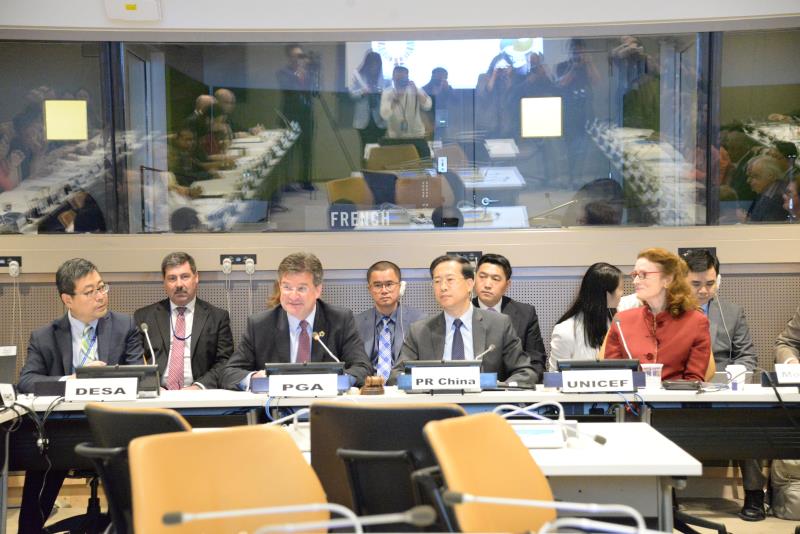 New York (People’s Daily) – Miroslav Lajcak, president of the 72nd session of the United Nations General Assembly, on Wednesday said that China’s Belt and Road Initiative is a key proponent for helping the UN achieve its 2030 Agenda For Sustainable Development.

Lajcak voiced his support during a high-level symposium called “’Belt and Road’ Initiative and 2030 Agenda For Sustainable Development,” which was co-hosted by the Permanent Mission of China to the UN, UNICEF, UNDP, UNESCO and WHO Office at the United Nations.

“China’s economic growth is not confined within its borders,” Lajcak said. “As a multilateral player, China is sharing its wealth and best practices through the Belt and Road Initiative.”

The agenda’s 17 Sustainable Development Goals (SDGs), which was launched three years ago, include solving worldwide problems such as poverty, climate change, and world peace.

However, achieving the goals is no simple task. Experts are brainstorming ideas on how to gain more private investments to tackle the world’s problems. Some ideas included asking banks in developing countries to build relationships for new investments and provide funding toward the agenda’s goals. It should be noted that the Belt and Road Initiative achieves both of the aforementioned goals and more.

The Belt and Road Initiative goes beyond its own goals of financing projects in developing countries, providing improved transportation routes, and increased south-south cooperation – it also represents China’s commitment to the 2030 Agenda goals and multilateralism.

The initiative is already helping many countries improve by increasing trade, improving economic growth, and allowing for the transfer of useful technology. These benefits, coupled with the right national policies, has led to the creation of many jobs, reduced poverty, and better infrastructure.

It is responsible for helping achieve led to one of the most prominent SDGs: which is to build relationships with other countries. From Montenegro to Kenya, the Belt and Road Initiative includes over 100 countries and international organizations in its plans.

Furthermore, the Chinese-proposed Asian Infrastructure Investment Bank provides funding through its loans program, which is another critical element for achieving the SDGs. In its first year, the bank lent $1.73 billion to support sustainable infrastructure and other projects. This will help to close the $5 to $7 trillion gap needed to finance the SDGs.

China’s development strategy is rooted in cooperation, trade, and geography. Since the world is in the golden age of connectivity, the need for multilateralism is at an all-time high.

Thankfully, multilateralism is the cornerstone of the Belt and Road Initiative since it shows China’s commitment to its neighbors and the members of the UN.

China’s commitment to improving the world also includes supporting the Paris Agreement on climate change and it once donated $200 million to the UN Peace and Development Trust Fund.

China is sharing its wealth through the Belt and Road Initiative and the country’s prosperity will have a major effect on helping the UN achieve its 2030 Agenda goals.