China's top court said the country's two international commercial courts will play a bigger role this year in helping resolve disputes related to the Belt and Road Initiative and improving the global credibility of the judiciary. 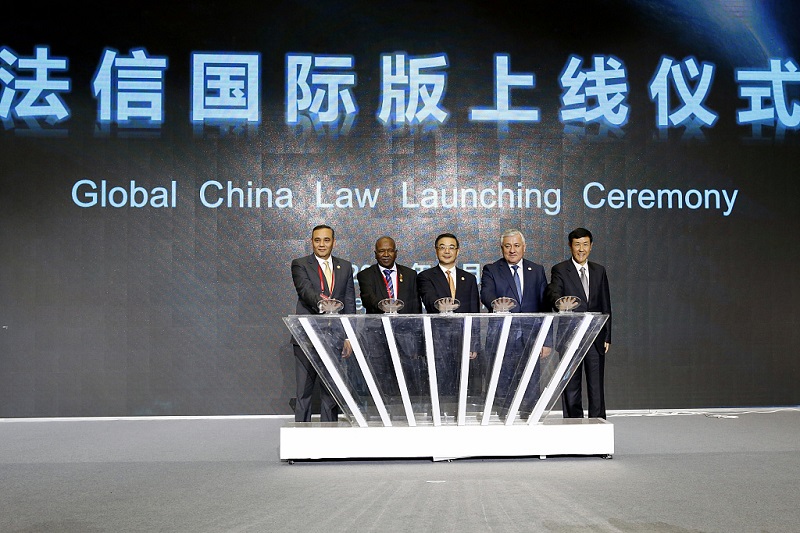 "We'd like to see some litigants from countries involved in the initiative solve commercial disputes in the two courts, and we promise they will receive fair and efficient legal services here," Luo Dongchuan, vice-president of the Supreme People's Court, told China Daily in an exclusive interview.

Luo was speaking a year after the central leadership approved a guideline on establishing the Belt and Road International Commercial Dispute Resolution Mechanism and Institutions.

Nine commercial disputes, mainly covering shareholder verification, earnings distribution and damage to companies' interests－coming from countries such as Japan, Thailand and Italy－have so far been filed in the two courts, according to the top court.

The two courts are responsible for dealing with large or complicated international commercial disputes, "such as those involving over 300 million yuan ($44.5 million), those that may affect relationships between China and BRI-related countries, or those that need to interpret international rules," Luo said.

For example, the No 2 International Commercial Court in Xi'an accepted four cases related to branches of Red Bull, the manufacturer of a popular energy drink.

"Such disputes, this one involving an influential foreign brand, are the kinds of the cases the two courts should hear," Luo said.

"How to solve disputes－through mediation, arbitration or litigation－will depend on litigants. Integrating the three different resolutions into one platform is our way of helping settle BRI-related cases."

Litigants can turn to two mediation centers, linked to the courts－or the committee consisting of 32 experts from 15 countries and regions to mediate their disputes－or seek to end commercial conflicts at one of five arbitration bodies.

"If litigants decide to pursue lawsuits, our 15 senior judges, all with more than a decade of experience in handling commercial disputes, will supply legal services and ensure the quality of case hearings," Luo said.

"What we want is to offer litigants more choices on one platform to resolve cases, not only to save them time and costs, but also to enhance judicial efficiency.

"The quicker we solve their disputes, the better for them to push forward with BRI-related construction projects, such as building bridges or railways. In the past, solving a foreign-related commercial dispute would take much more time in China. But now, thanks to the integrated platform, such disputes can be solved faster," Luo added.

If litigants are unhappy with the findings reached by the two courts, they can appeal to the top court's No 4 Civil Division for a retrial, Luo said.

"The two courts, I believe, will play a bigger role in strengthening legal protections for countries involved with the initiative and providing a better business environment for investors from home and abroad," he said.

"Also, I hope more foreign litigants can gain more understanding of our legal system and increase their trust in Chinese justice by our improved handling of their cases."

Luo said judges at the two courts will be given more training this year and learn more about how to search for and adopt foreign laws from the expert committee.

"We'll also increase communication with countries that have experience in international commercial dispute resolution, such as Singapore, the Netherlands and Dubai, to improve our case handling," he said.

"As we know, the best way to remove foreigners' concerns about our dispute handling is to improve our ability and quality in case hearings."

China has seen inbound foreign investment grow rapidly since 1978 when the country began implementing its reform and opening-up policy.

But the top court said a flurry of foreign-related lawsuits had also been seen, especially in the wake of the BRI's recent rapid progress.

The initiative, proposed by President Xi Jinping in 2013, covers the Silk Road Economic Belt and the 21st Century Maritime Silk Road, with the aim of creating a trade and infrastructure network to connect Asia with Europe and Africa along ancient trade routes.

The top court said Chinese courts at all levels resolved about 200,000 foreign-related civil disputes from 2013 to 2017, with BRI-related cases a major component. Judges nationwide will give equal protection to litigants, no matter where they are from, it added.

Before unveiling the two international commercial courts, the top court took various measures to better implement the initiative, such as issuing a judicial interpretation and disclosing the details of significant individual cases.

How SPC International Commercial Courts came to be:

Jan 23, 2018: The Central Leading Group for Deepening Overall Reform, headed by President Xi Jinping, approved a plan drafted by the Supreme People's Court to resolve disputes between or among countries involved in the Belt and Road Initiative.

March 9, 2018: The SPC highlighted improvements in solving disputes with other nations in its annual work report, promising to effectively implement the plan and offer better legal services for foreign litigants.

June 25, 2018: The SPC issued a guideline on the building of international commercial courts and how the courts would work.

Aug 24, 2018: The SPC disclosed names of the first group of 32 experts, announcing they comprised the International Commercial Expert Committee and would help mediate, arbitrate and resolve BRI-related disputes.

Dec 5, 2018: The SPC issued three guidelines on hearing procedures of the international commercial courts and how the expert committee works.