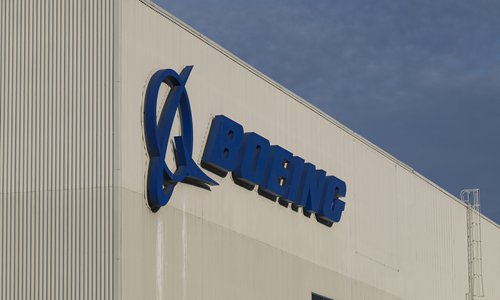 US planemaker Boeing Co announced on Monday that it would open a new freighter conversion line in Guangzhou, South China's Guangdong Province, as trade tensions between China and the US have shown signs of easing.
The new conversion line, launched in cooperation with Guangzhou Aircraft Maintenance Engineering Co, is for Boeing 737-800 planes. It is intended to start operation in 2020, according to a statement from Boeing.
The line will meet rising demand in the Chinese market for cargo planes, the statement said. Boeing first launched the 737-800 freighter conversion program in 2016, and it has received orders or commitments for 130 planes, with 17 expected to be delivered by the end of this year.
The move by Boeing, which has been in the crosshairs of the China-US trade war, comes as tension between the world's two biggest economies eased following recent negotiations. The two sides have signaled that a partial phase one agreement could be signed as soon as next month.
Chinese airlines and companies refrained from making new orders with Boeing since the US began to wage the trade war against China more than a year ago, according to media reports. Boeing CEO Dennis Muilenburg suggested during a recent call with shareholders that challenges posed by the trade war could persist, CNBC reported Wednesday.
"The lack of orders from China in the past couple of years has put pressure on the production rate," Muilenburg said, according to CNBC.
Lin Zhijie, an independent analyst, said that the conversion program mainly uses secondhand aircraft; therefore, it won't be affected by the tariffs.
"If it involves domestic aircraft being converted and delivered to domestic clients, then there are no tariffs that need to be paid," he told the Global Times on Monday.
In September, Boeing raised its forecast for China's demand for aircraft to 8,090 through 2038, 5.2 percent higher than its forecast last year, Reuters reported on September 17.
Boeing's standing in China was also seriously undermined by a pair of crashes of its new Boeing 737 MAX. China was the first country to ground the plane after it was reported that technical issues may have led to the crashes, both of which took place outside China.