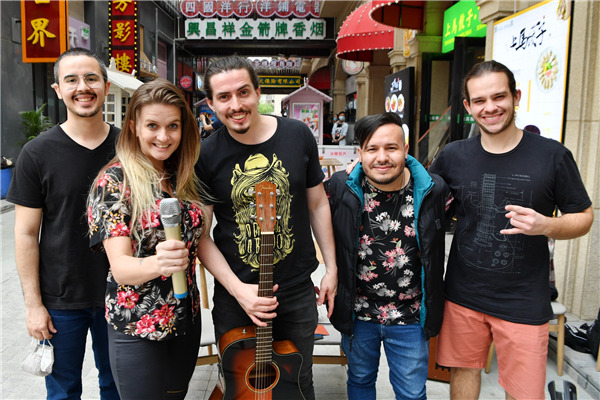 They usually rock the stage for cheering fans and sing at the top of their lungs, but members of Brazilian band Fancy recently took a very different direction: fighting the coronavirus epidemic in China.

The band has five members. After signing a contract with an art company in Northwest China's Shaanxi province, the ecstatic band members were looking forward to performing a series of shows in China during the Spring Festival holiday. They were arranged to do residencies in some bars and hoped to get their foot in the door in China.

Then came the coronavirus epidemic. Excitement turned into surprise and confusion.

"We embarked on our journey to China but ended up in a battle against the epidemic," said the members.

Lead singer Mariana said they received a call from their manager on their way to China, telling them that the Chinese New Year shows might be halted.

"We did not expect the epidemic to be so serious at that time," Mariana said.

On Jan 26, they arrived in Xi'an, Shaanxi provincial capital, an ancient city known for its iconic Terracotta Warriors.

"Before we could experience the ancient Chinese culture here, we had to be in quarantine," Mariana said.

John, the guitarist, said that they had no idea how the virus transmitted, but the community's measures were in time, which "made us feel safe," he said.

The province later upgraded its emergency response to the first level, as local districts started to close off their compounds.

"We stayed at home as much as possible, and would wear masks whenever we went outside," he said. "They took our temperatures every day, which I believe was quite effective."

In the apartment they rented, the band members turned the living room into a temporary venue for rehearsals with a bass, a box drum and maracas.

"Besides going to the community supermarket for food, we utilized the quarantine time to study Chinese culture," John said. "We learned some Chinese and tried to sing Chinese songs."

Giovani, the band's drummer, is especially interested in Chinese culture. Back in Brazil, he had purchased a Portuguese version of Tao Te Ching, the Chinese classic by Lao Tzu.

"I have always been interested in China's ancient philosophy, and reading Tao Te Ching gives me a sense of calmness," Giovani said.

"They just arrived in China, and it is not easy for the band members," said Wang Beichun, who manages the community in which the band rented the house. "They understood and cooperated with our epidemic control and prevention work."

The members don't know much Chinese, so they often used translation applications to seek for help in life, which helped them form a very good bond with locals, Wang said.

Though caught by the epidemic by accident, the members were quite impressed by China's anti-epidemic efforts.

"What struck me most was the Chinese people's sense of solidarity," Giovani said. "We saw a video online about some local residents in Wuhan chanting 'Cheer up Wuhan! Cheer up China,' and we were quite touched."

As musicians, Fancy also wanted to do something to pay tribute to the medics fighting on the frontline. During their quarantine time, the band wrote an English song called "Tale of Solidarity."

On April 4, China, with its 1.4 billion people, paused in silence for three minutes from 10 am to 10:03 am to mourn the lives lost to the coronavirus outbreak.

The band joined the Chinese people in mourning, with the five members standing in line in their apartment in silence.

"China's measures have set quite an example," said John. "Now that the virus has broken out in many other places, including our home country Brazil, we often share our anti-epidemic measures in China with our family."

The band members have all obtained the "health codes" required in Xi'an to prove their health status, and they are free to go outside. But as many entertainment venues are still closed, their performances are still on hold. So they chose to perform in public areas such as parks to do live-streaming, hoping to attract more fans in China.

Wearing masks and playing their musical instrument, the band sang the song they wrote in the parks and along the streets in Xi'an. The lyrics depict the fight against the virus in China:

Let me tell you a story about solidarity,

But while we hold each other, hope will never fade.

The rhythm and the voice, coupled with their dance moves and some Chinese lines, cultivated quite a following on the internet.

The band also created a to-do list in China. They hope to visit the Terracotta Warriors, learn some kungfu at Shaolin Temple, hit the stage on China's entertainment shows, and become popular in China. But mostly, they miss the stage.

"I hope the epidemic will be over as soon as possible," Mariana said. "We aspire to be on stage again."