BRI brings new opportunities to companies, residents along the routes

BEIJING, April 10 (Xinhua) -- The China-proposed Belt and Road Initiative (BRI) has not only brought opportunities to Chinese companies but also benefitted countries and local residents along the routes.

Chinese companies are finding new ways of going global while contributing to the development of relevant countries, thanks to new business opportunities brought about by the implementation of the BRI. 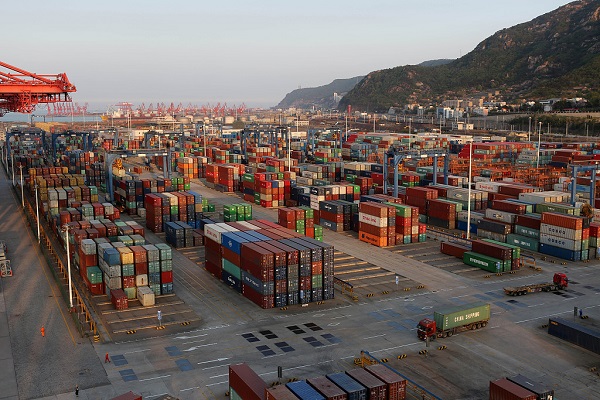 Last year, it added over 12,000 containers tailored to railway transportation to its product inventory.

The oversized open-top twenty-foot containers tailored to railway shipping were developed and manufactured by its subsidiary located in the city of Zhangzhou, east China's Fujian Province.

Shanxi, an inland province, now eyes more trade and cultural ties with Belt and Road economies thanks to the development of the initiative.

Chen Hecai, chairman of Shanxi Branch of China Council for the Promotion of International Trade, said he made business trips to nine countries along the route in 2018 alone, inking contracts and letters of intent worth of 45.33 million yuan (about 6.75 million U.S. dollars).

Local residents along the Belt and Road have benefited from improved infrastructure and more job opportunities as Chinese enterprises expanded their overseas businesses in Belt and Road regions.

In eastern Africa, a 130-km road that traverses the drought-stricken savanna in north Kenya was completed in 2017 by China Wu Yi Co., Ltd. which is headquartered in Fuzhou, capital of Fujian Province.

Apart from providing more economic opportunities for the whole country, especially the underdeveloped north, the Turbi-Moyale road, that connects Kenya and Ethiopia, has also changed the lives of thousands of local residents.

Yang Dong, a project manager responsible for supplying water for construction needs, was soon surprised to find that local residents and their livestock frequently visited their ponds.

As more residents benefited from the project, the Chinese construction workers were welcomed there. One day, Yang received six sheep as gifts from a local villager.

Then, more ponds were dug to meet the demand of local residents.

More than 200 households have chosen to settle near the ponds, and herdsmen from Ethiopia cross the border to get water from the ponds, according to Wan Dongsheng, deputy general manager of China Wu Yi Co., Ltd.

Austria Technologie & Systemtechnik AG (AT&S), which tapped into the Chinese market in 2001, expanded its investment in China by introducing high-end semiconductor package substrate technology into China and opening a new production site in southwest China's Chongqing Municipality in 2016.

Andreas Gerstenmayer, CEO of the world's leading printed circuit boards maker, said the BRI opened up new horizons for the company's development as sales volume from the Chinese market is expected to account for half of its global sales.

"The Chinese market is the key revenue driver for AT&S and is vital to our future," said Gerstenmayer.

Xu Hongcai, an economist with the China Center for International Economic Exchanges, said the BRI has not only brought opportunities to Chinese companies but also benefitted residents and countries along the Belt and Road.

According to this year's government work report, China will continue to "promote the joint pursuit" of the BRI, aiming at "shared growth through discussion and collaboration."