Although it started mostly through cooperation with emerging markets, the China-proposed Belt and Road Initiative (BRI) is evolving into what one expert called "a worldwide project," as several European countries including Russia, Italy and France applauded the program. 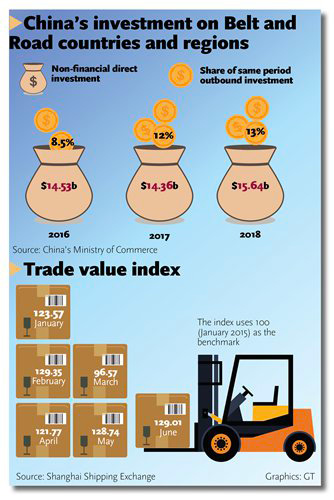 The maturity and expansion of the program won't be stopped by US protectionism. Instead, it would stimulate cooperation between China and other economies also pressured by the US, experts said.

"The BRI is walking on a wider road. It has broken beyond the geographical concept where it originated," Zhou Rong, a senior research fellow at the Chongyang Institute for Financial Studies at the Renmin University of China, told the Global Times on Wednesday.

A BRI China-Italy business investment matchmaking conference was held in Milan, Italy on Friday, where business representatives from both countries discussed the search for appropriate business investment opportunities under the BRI program, the Xinhua News Agency reported on Sunday.

Italy was the first major European economy to join the BRI, which signed a BRI memorandum of understanding with China this March.

Russia is also considering how to connect its major infrastructure projects with the BRI program. On Tuesday, the Chinese edition of Russia's Sputnik news agency cited Monkevich Vitaly Vikentievich, president of the Russian Asian Union of Industrialists and Entrepreneurs, as saying that the country's first privately invested highway called Meridian Highway will be helpful for implementing the BRI.

Vikentievich said that the new highway will cut the cargo shipping cycle between China and Europe to 10 or 11 days. Currently, it takes about 45 days for goods to be shipped from China to Western Europe via the Suez Canal.

A report recently released by the CCI Paris Ile-De-France also pointed out that China will "play its role as the main center of the world economy" as it organizes trade around the New Silk Road. It also noted that the BRI is a project with a strong economic dimension worth enlightening because it provides important opportunities illustrated by the various inter-company cooperation.

According to the report, China's New Silk Road initiative has contributed to the development of cooperation between French and Chinese companies, including not only large enterprises but also small and medium-sized enterprises in industries such as maritime, rail and air transport and tourism.

The report also noted that China's major transport infrastructure projects under the BRI contribute to the growth in market demand and raise global standards in the sector.

"When BRI just started, some European countries didn't see many benefits of it. But now they are seeing what the program can bring them. For example, the active operation of the China-Europe Railway Express has caught many European countries, which have been relying more on sea transport, by surprise," Zhou said.

"Also, for some European countries like Germany, their technologies and products are of good quality, but the prices aren't so good. They won't find many generous customers like China," Zhou noted, adding that in the future, the BRI will be a multi-faceted program with multiple partners and multiple cooperation methods.

China's trade with countries and regions along the BRI route rose 16.3 percent year-on-year in 2018 to $1.3 trillion, while non-financial direct investment from Chinese companies into BRI economies rose 8.9 percent to $15.64 billion, data released by the Ministry of Commerce showed in January.

The warming popularity of the BRI in the global community comes as protectionism, mainly initiated by the US, is sweeping the world.

"I think it will speed up cooperation between China and countries that are also under pressure from the US," Li Chunding, a professor at the College of Economics and Management under the China Agricultural University, told the Global Times.

According to Zhou, apart from trade protectionism, the US has not come up with any "active suggestions" like the BRI. "This is causing US prestige to drop," he commented.